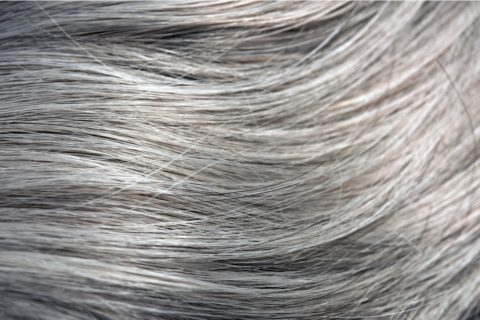 Every once in a while, a beauty product comes along that boasts a breakthrough so potentially game changing that its claim causes even the biggest skeptics (i.e., beauty editors) to take note. The one in question is Phyto’s RE30 Grey Hair Treatment, which apparently prevents grey hairs from sprouting and re-pigments some existing ones.

But let’s back up and recap why we go grey in the first place. As we age, the cells in our hair follicles, which are called melanocytes, begin to lose their ability to produce melanin, or pigment. Why that happens isn’t completely understood, but some researchers have suggested that it’s linked to the natural buildup of hydrogen peroxide inside the follicle. Normally, an enzyme called catalase breaks down this chemical into water and oxygen. As we age, we produce less catalase, and this leads to hydrogen peroxide accumulating in the follicle. This, in turn, disrupts melanin production and literally bleaches the hair from within, explains Elisabeth Gagnon, national trainer for Phyto Canada.

After six years of research, Phyto has created a clear leave-in serum that contains RE30, a peptide that boosts the production of melanin. The formula also contains purple tulip extract, which helps strengthen the internal structure of grey hair. It’s not an overnight cure: After applying eight pumps of the serum to the scalp daily for three months, you may see a 38 per cent reduction in grey hairs. We’re testing it out and will report back.

The science of going grey

A product used to treat vitiligo—a skin condition that leads to de-pigmented patches appearing on the body—may also one day be used to prevent hair from going grey. Researchers from the Institute for Pigmentary Disorders, in association with Germany’s University of Greifswald and the Centre for Skin Sciences at the United Kingdom’s University of Bradford, discovered that the natural buildup of hydrogen peroxide can be reversed with a UVB-activated compound called PC-KUS, a modified pseudocatalase.