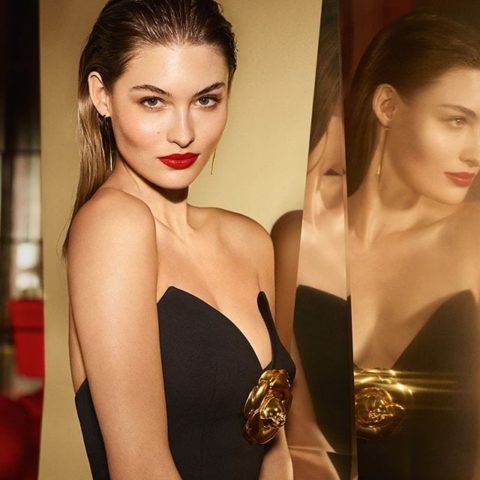 From the high fashion runways to Victoria's Secret shows, this model's must have is lipstick and now she's an ambassador for one of her favourites.

For many, nude lipstick is part of their everyday makeup routine. But for model Grace Elizabeth, a bright red tinge to the lèvres feels like home. “If you look at any of my red carpet looks I’m usually in a red lip,” says Elizabeth. “It’s just my favourite. It’s so strong, and sensual and confident.” The 21-year-old, who recently signed on as a spokesperson for Estée Lauder and is the face of Pure Color Desire Lipstick cites “Rouge Excess” as her favourite among the 29 shades, which come in two different finishes: creme and chrome.

Meet bold lip color as desirable as you are. Go behind the scenes and watch #EsteeModel @lovegrace_e's #PureColorDesire campaign look come to life with high-impact glam in just a few simple steps. Featuring Desire Lipstick in Rouge Excess.

The Lake City, Fl., native started wearing lipstick regularly when she was 16, but the first time she tried it on she was just four years old. “I stole my grandma’s makeup kit and locked the bathroom door,” she says. “After that, my grandpa had a photo of me on his bedroom mirror of me covered in lipstick,” the model recounts of her early experimental days. “I used to steal my mom’s lip liner too. I used to hide it from her and get in lots of trouble.”

Elizabeth actually got her start in fashion walking for Miu Miu in a runway show. Then she graduated to the vast world of commercial modeling and earned the title of a Victoria’s Secret Angel. From a general standpoint, it’s safe to say she’s pretty much done it all. But not that’s not the way Elizabeth sees it. Her next goal for the near future is to have her own American Vogue cover.

“I have many dreams. There’s this saying by Miss Estée Lauder herself that goes, ‘I didn’t dream about success, I worked for it,'” says Elizabeth. “I work really hard and I don’t want to be given things. I want to feel like I’ve earned it.”

Working alongside the brand’s other faces like Karlie Kloss —who Elizabeth admires greatly and credits for teaching her how to represent herself—and Joan Smalls has served as motivation for the young, up-and-coming supermodel.

“I try to re-evaluate every six months, look at my goals and figure out what I want next,” Elizabeth says. “Long term… I hope to be with Estée Lauder for a very long time,” she says, citing fellow brand ambassador Carolyn Murphy. “It’s really a family brand, something you can grow into and age with.”

Photography via Instagram/@esteelauder
Get the best of FASHION in your inbox Thanks for signing up!
The latest fashion, beauty and celeb news delivered right to your email #FASHIONforall Now, check your inbox to complete your subscription
We won’t ever use your email address for anything else
Want even more FASHION? Follow us on social media.