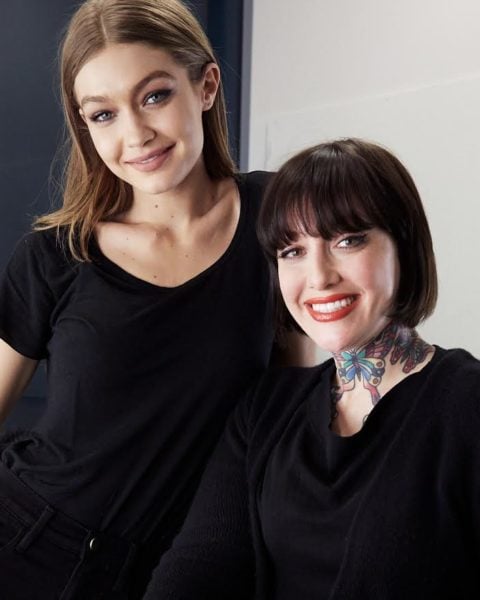 With over 63,000 Instagram followers, a past gig assisting Pat McGrath, and the current title of Gigi Hadid’s go-to makeup artist, Erin Parsons is set to become a household name.

We chatted with Parsons about some things we’ve been dying to know, like how to take the perfect selfie and, obviously, all things Gigi.

How did you start working with Gigi?
I met her while assisting on the shows during fashion week. But it was after doing her makeup for Halloween one year that we became friends outside of work. She went as Sandy from Grease and looked incredible!

What’s your favourite look you’ve ever done on her?
Honestly every look I do on her is my favourite because she is such a chameleon when it comes to makeup. We definitely have our nude look down, with warm bronzed skin and icy highlights. I love to use bright matte colours on her lips like the electric coral we used at the AMA’s – a combination of Maybelline’s Color Sensational Creamy Matte Lip Colour and Color Sensational The Loaded Bolds Lipstick. She honestly can pull off any look and I’m more than happy to play with makeup on her. She’s open to ideas and has input on what she likes, so it’s always a beautiful collaboration.

What’s the most experimental look she’s done?
Definitely when we did the graffiti look for Maybelline. It turned into a huge trend on Instagram that people deemed “mermaid eyes.”

What beauty trend do you wish would disappear?
I love all makeup, good and bad, so I don’t wish for anything to disappear. Bring on more!

What’s a beauty trend from another time period that you wish would come back?
I absolutely love pencil thin eyebrows à la Marlene Dietrich. It makes such a statement and you really have to own that look. It can give an easily identifiable character trait if you don’t want to fit into the “norm.”

What’s one product that people don’t use often enough or overlook?
I think because false lashes has become such a trend people give up on mascara too quickly. It’s a staple in every makeup bag but I wish people put as much love into it as they do their eyebrows or their contour. I have a process with curling the lashes, using two different mascaras if necessary, re-curling, reapplying and combing through clumps until the lashes are perfect. My favourite is Maybelline Colossal Big Shot for major volume and length. No false lashes required!

What’s one product that people use too much but may not need?
Powder highlighter. It may look pretty in pictures but can be abrasive and chalky in person.

What’s one common makeup mistake that people make that makes you cringe?
There’s really no makeup that makes me cringe. I love it, mistakes and all. Sometimes a mistake can turn into a cool trend. For instance, super clumpy lashes. That became a huge look in the fashion world.

What Instagram accounts are you inspired by?
I love following the new club kids, drag queens and people who are intensely experimental when it comes to makeup. They are not afraid to take it to another level and spend hours perfecting lines and gluing on random objects. It’s so fun and so inspiring! Just to name a few: @ryburk, @teratology, @thatgirlsussi, @isshehungry.

Do you have any tips for aspiring makeup artists navigating their business on social media?
Honestly I’m terrible when it comes to posting on social media. I just love to share interesting makeup looks and hope other people like them, too. It’s not a business for me, it’s just for fun. But I will say be true to yourself and your aesthetic. Sometimes the weird experimental stuff will not get a huge response but a simple red lip might get tons of likes. Don’t let it discourage your experimentation.

How has social media changed the way you work?
It definitely makes me aware when I’m doing makeup to be as precise as possible and not cut corners. You can’t trust a retoucher to fix a crooked lip and people on Instagram are used to the fantasy of photoshopped perfection.

What’s one tip you would give people about selfie makeup vs. real life makeup?
If you can see the foundation so can everyone else. But if you’re not trying to go for the natural look then who cares? You do you.

What’s your best makeup tip for taking a good selfie?
Always powder the t zone. Most importantly, use your best angles. Sometimes it has nothing to do with the makeup.