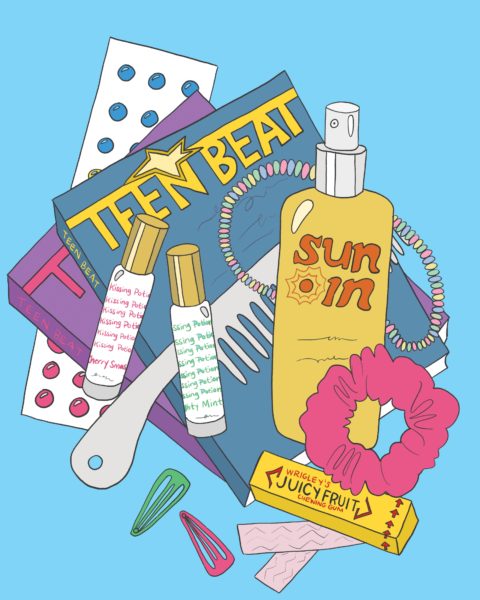 A Writer Recalls the Intense Friendships She Formed While Discovering Makeup

We spritzed Sun In in our hair and did Glamour Shots-inspired photo sessions, posing in our terry cloth shorts with what we dreamt were sultry looks on our freckled faces while we tossed our feathered hair just so.

“Do you think you should wear a perfume that smells like flowers or one that makes you smell like something good to eat?”

I’m 11. My friend Karen and I are having one of our many sleepovers where, deep into the night, we ponder life’s mysteries, like what perfume to wear, which boys and girls are “going around” and who in our class is going to get their period first. “Hmm…” I think deeply. “Like flowers!” I mean, why would you want to smell like doughnuts? Duh.

The cosmetic trappings of impending womanhood were a major source of discussion among my gaggle of circa 1980s BFFs. Karen and I would spend hours on our bellies in my bedroom drawing pictures of girls (teenagers, obviously, who were SO COOL) wearing elaborate makeup and hairdos. We hoarded our babysitting money so we could go to our tiny local mall, in Markham, Ont., and buy Maybelline Kissing Potion Roll-on Lipgloss (Cherry Smash for me, Mighty Mint for her). We spritzed Sun In in our hair and did Glamour Shots-inspired photo sessions, posing in our terry cloth shorts with what we dreamt were sultry looks on our freckled faces while we tossed our feathered hair just so.

The ante was upped in Grade 7, when the shackles were off and suddenly all the girls were allowed to wear makeup. I’m not sure who sent the memo, but like a swarm of tittering flies in training bras, everyone converged, seemingly spontaneously, on the Faces kiosk at that same mall and emerged triumphant, one of two iconic lipsticks—#59 or #65—slathered on our lips. Fifty-nine was a pale frosted pink—a daytime look, really. Sixty-five—a darker frosted pink—was for when you were feeling bold.

I still remember those numbers, and I still remember their exact shades, but what I also remember is how those lipsticks were the beginning of a lifelong shared language between all the girls in my life and me about makeup and clothes (and—let’s be real—boys). We talked about wanting to look pretty (but feeling ugly) and so much more. In my preteens and teens, boyfriends came and went, inspiring many a tortured mix tape and stacks of terrible poetry, but my girlfriends were truly the loves of my life.

“What are you talking to her about for three hours?” my mother yells from downstairs. “You just saw her all day at school!” Sixteen-year-old me shuts the door on the study and settles in with Tracy to debrief on the minutiae of the day. We do this pretty much every night. She sings me songs over the telephone line (we’re musical-theatre nerds—I know, I know), I read her my latest short story, we discuss losing our virginity (I’m pro, she’s against) and we dissect every passing glance from the boys we’re currently obsessing over.

But when we’re together, we mainly do three things: go to choir practice, shop for vintage clothes and try on makeup. Tracy shows me the way of undereye concealer and, as my “gateway-drug dealer,” leads me from the drugstore aisle to the Big Girl Land of Clinique and M.A.C.

We mainly do three things: go to choir practice, shop for vintage clothes and try on makeup. Tracy shows me the way of undereye concealer and, as my “gateway-drug dealer,” leads me from the drugstore aisle to the Big Girl Land of Clinique and M.A.C.

If you were a teenage girl in the late ’80s, shopping for prestige makeup in Canada wasn’t the Sephora-crazed cakewalk it is today. To up your game, you had to enter a terrifying place: The Bay. Someone’s parent would drop Tracy and me off at Markville Mall, and we’d make a beeline for the stern lab-coated women (because they were makeup scientists) at the Clinique counter. They stared suspiciously as our giggles broke the carpeted silence of the Department Store Shopping Experience (“No, really, we’re buying! I have a part-time job at Pantorama, and, lady, I’m here to spend.”), and Tracy advised me on shades with the gravitas of a 15-year-old Parisian trend forecaster. Raspberry Glacé (a deep sparkly pink), Earth Red (a deep brownish red) and a brown whose name is lost to me became my rotating lipstick wardrobe, all selected for me by The Eye of Tracy.

Tracy was pretty, popular, obsessed over by boys, the star of the school play and the president of the school council—pretty much the worst possible person to be besties with when you’re none of the above.

Tracy was pretty, popular, obsessed over by boys, the star of the school play and the president of the school council—pretty much the worst possible person to be besties with when you’re none of the above. But she really believed that I was beautiful and cool and smart, and as she did my makeup in her bedroom before I went to, you know, drop in on the boy I liked at his after-school job, for a moment I did, too.

It was also Tracy who introduced me to M.A.C. Back then, M.A.C (which started in Toronto) was still in its early cult-brand years—beloved by makeup artists and all the cool downtown people whom I so longed to be—and hadn’t yet begun to explode into mainstream consciousness. By 16, I had entered my requisite “weird artsy girl” phase, and in addition to Tracy’s and my shopping trips to the now-long-gone second-hand clothing stores on Queen Street West, where I would pick out crinolines, boleros, Doc Martens and weird hats, we always made a pilgrimage to the M.A.C store, where I bought whatever seemed to best project a true sense of my inner torment. And Miko* loved inner torment.

Miko was the last of my girlhood loves. She was beautiful, spoke Japanese, had a BRITISH ACCENT and smoked cigarettes through pouty purple-tinted lips—M.A.C, bien sûr! Even though we were still in high school, she had already moved out and lived with roommates. She wore a motorcycle jacket. She had drinking problems. In short, she was perfect. We fell into an intense, obsessive friendship, and she pretty much lived with my family for a year.

We were mostly inseparable until, a couple of years in, when, like a scene from a terrible romcom, I stumbled upon her and those purple lips making out with her New Other Best Girl Friend (whom I was already viciously jealous of). I didn’t have a queer bone in my body, yet my first tearful question was “Does this mean you love her more than you love me?” I think she said no. I don’t remember how or when we lost touch, but we did.

These days, I’m a married mom and still have close female friends, one of whom has spent at least 30 years telling me that I wear too much mascara. (Does that count as a shared language about makeup?) But having good friends in your 40s just isn’t the same as the obsessive daily enmeshing that can be the friendships between girls. And sometimes I think I miss it. I still see Karen on social media, and I see Tracy in person a couple of times a year. I look for Miko, and I find slivers of her here and there, but, well, she’s a nun now. (No, really.) But I think of Karen every time I buy a fragrance (“Like flowers or something good to eat?”), of Tracy whenever I try on a lipstick at a beauty counter and of Miko when I see someone in a dark berry lip.

(*Name has been changed.)