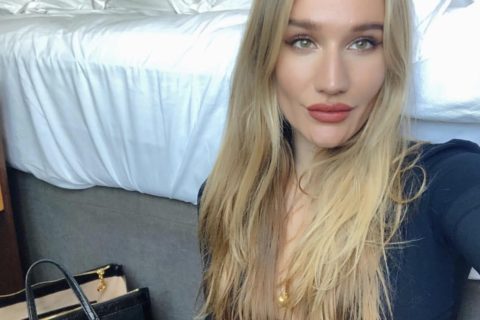 Go behind-the-scenes with the mogul-in-the-making

If you follow Charlotte Tilbury on Instagram, chances are that you’ve seen her niece, Sofia, pop up on the brand’s feed more than once. A makeup artist in her own right (she’s been working for eight years), the 26-year old currently holds the position of Creative Executive at Charlotte Tilbury.

After studying Art and Design, Sofia (who bears a striking resemblance to Rosie Huntington-Whiteley – #thedream) cut her teeth at the brand’s Selfridges counter in London, before helping Charlotte out backstage at shows during London Fashion Week. She then moved into her current position, where she is responsible for new product development, like the Stars In Your Eyes Palette, and campaigns, among other things. She’s also garnered an impressive online following of her own in that time.

This year, Sofia returned to her Fashion Week days, albeit in a slightly different capacity – as the lead makeup artist for three major shows on the S/S20 calendar: Agent Provocateur, Temperley London and Olivia Rubin. She also did Stella Maxwell’s makeup for Naomi Campbell’s Fashion for Relief show.

Here, Sofia exclusively shares her London Fashion Week diary with us. In the clip, Sofia explains how she came to work with her famous aunt and offers a behind-the-scenes glimpse at how she created certain looks for the shows. Miss Fame (who featured on season 7 of RuPaul’s Drag Race) can be seen in the video describing Sofia, saying, “I have three words to describe her: stunning, intelligent and talented. Her makeup artistry is beyond.”

Catch it in full below:

Earlier today, Charlotte Tilbury announced her newest launch, the Palette of Pops Eyeshadow Palette in Pillow Talk. Inspired by her cult product of the same name, the new palette infuses the classic colours with highly pigmented shimmer for a dazzling shine. The brand also released a new Lip Lustre in Pillow talk, too.

Photograph courtesy of Instagram/@sofiaschwarzkopftilbury
Get the best of FASHION in your inbox Thanks for signing up!
The latest fashion, beauty and celeb news delivered right to your email #FASHIONforall Now, check your inbox to complete your subscription
We won’t ever use your email address for anything else
Want even more FASHION? Follow us on social media.