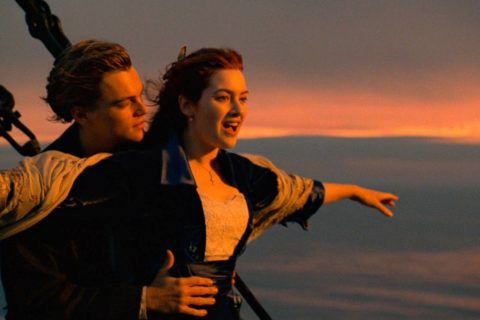 Every Beauty Look in Titanic, (Over)analyzed

Apologies in advance for not including Brock Lovett’s sweater.

Titanic is a beautiful movie filled with beautiful people. Jack is beautiful. Rose is beautiful. Bruce Ismay’s moustache is iconic in its beauty, arguably on par with Billy Zane’s wig. So to not dissect and engage with the looks of the most important movie in the world would be an egregious oversight. It would be irresponsible. It would be tragic. And since Titanic is filled with enough tragedy as it is, it’s time for due diligence, in honour of the film’s 20th anniversary (on December 19th!).

1997 was an important year for many reasons, but Leonardo DiCaprio’s haircut was the most important reason of them all. Having come off Romeo + Juliet the year before (and The Basketball Diaries the year before that), Leo’s center part helped elevate him to teen heartthrob status in a way rivalled only by fellow teen dreams Nick Carter and Devon Sawa. DiCaprio’s haircut was everything. His haircut was powerful. His haircut is why some of us (hello!) wanted to date a guy in our seventh grade class despite him having recently burned down a townhouse, and why we came to detest too much hair gel. A centre part connoted style, an understanding of trends, and a refusal to conform to something that was a little too adult.

Which is what Jack Dawson was all about. Ironically, Jack and Cal had very similar hairstyles, but wore them in different ways. Where Cal slicked his back to align with an aesthetic reserved for upper class gentlemen (which Jack does during the first class dinner), Jack’s refusal to conform is reflected in his lack of product or use of combs. Like Jack himself, his hair is free-wheeling and fancy-free. 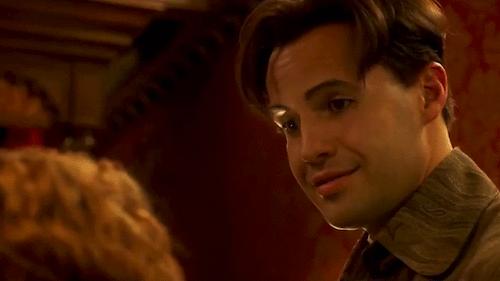 Honestly, this is just the part of the piece where I admit that I didn’t know until about two years ago that Billy Zane was wearing a wig.

Also, as mentioned, he and Jack share the same vibe. But where Jack’s hair was the stuff Tiger Beat dreams were made of, Cal’s is stiff and rigid (much like his opinions about gender and class). That is, until the ship begins to sink. He gets desperate, his hair loses its capacity to obey, and soon he’s all Jack Dawson while shooting at his fiancé and kidnapping a child. Unfortunately for him, its too short. And where Jack looks dreamy with his glorified bangs, Cal looks the way I did when I was trying to grow mine out that same year.

Clearly, the film’s coolest character (because nobody in this movie is actually cool besides Molly Brown, tbh) adhered to our collective late nineties beauty norm. Read: brown lipstick. As if plucked from the pages of a dELiA’s catalogue or Drew Barrymore’s short-lived look in Scream, Molly Brown’s lipstick reflected her last name and her new money Americanisms. Where the established members of first class stuck to reds and pinks, Brown favoured riskier earth tones, which makes sense when you think of the risk she took taking Jack under her wing, talking back to the sailor in her lifeboat, and daring to be a woman who was funny and loud in an era where blandness and silence were favoured.

Which is even more interesting when you remember that Rose’s dinner party lipstick favoured a brown undertone over traditional pinks. Girlfriend was gearing up to rebel against class systems and no one saw it coming. (Except for us, who knew Jack and Rose were meant to be.)

The key to Rose’s evolution lies in her hair. (See? Told you she and Jack were meant to be.) When we meet her, it is up, it is kept, it is tidily maintained under a hat. Like Rose herself, it follows the rules and strays only when we see her ready to jump off the ship, at which point it’s been let down.

And from there, Rose’s hair comes to reflect where she’s at personally. It’s worn up at dinner, but loosens upon her arrival to the third class party. It’s half-up when she and Jack finally kiss, and then down completely when he draws her nude (and for the rest of the film). But then it goes so far as to lose its curl. As chaos breaks out, Rose’s hair reflects an “out of the way, I do not give a fuck” nature of her survival. Unlike her mother, she cares not for seating arrangements on lifeboats, but for surviving in general. Which is why her arrival to Ellis Island sees her hair down and wet and reflective of the pandemonium she experienced. She’s no longer a girl willing to be tamed, she—and her hair—are starting anew.

Because if he didn’t have one, we’d never know he was a villain.

Ruth’s look exists for but one purpose: to show us how Rose would look if she’d stayed with Cal, climbed aboard a lifeboat, and carried on with her buzzkill life. So like Rose at the start of the film, her hair is up, it is curly, and her makeup is safe and traditionally feminine with understated pink tones. In short, it is fine. She was fine. (Girlfriend grew up in the Victorian era; obviously she was going to adhere to society’s status quo.) The real question is how goth she probably went on to look after the sinking, believing her daughter to be dead and now without Cal’s financial support.

The girl could wear a bow.