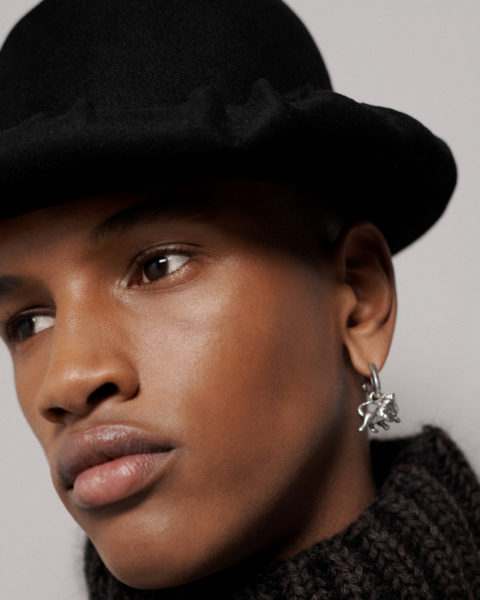 “The overall look is very rich, with the wet hair [by hairstylist] Guido [Palau], and the hats and berets,” explains Philips of the Dior Men’s FW 2021 look. “So we went for natural [beauty]; no gimmicks or conceptual makeup this time. Just a beautiful, natural face.” Speaking of those luxe hats and berets, they’re part of a collab with renowned Scottish-born, Trinidad-based painter Peter Doig, who Dior Men’s Creative Director Kim Jones announced a collaboration with earlier this week.

Doig’s work can be seen on the accessories in the Dior Men’s FW 2021 collection, such as the belts and jewellery, and is also hand-painted on many of the hats worn by the models, which Philips explained was part of the reasoning behind the natural makeup look. “Some of the pieces are worth a fortune, so we were very careful not to get makeup on them,” he laughs.

However, this was not always the plan. “Originally, the idea was to work with colour and paint, so me and Guido [Palau] were testing brush strokes in the hair and all over the face. But when we [paired that] with the outfits, it was just too much.” In the ultimate lesson in “less is more” styling, Philips explains that they “narrowed it down and what was left over was the wet texture in the hair. And because the collection has these rich tones, the luminous skin and wet hair are a nice contrast to that, [as well as] the felt hats and matte textures in the clothing.”

For the beauty look, Philips used Dior Backstage Face & Body Foundation for a finish that’s “not matte, not shiny, but luminous,” along with a few drops of Dior Flash Luminizer to “catch the light.” Models’ brows were tidied up with Diorshow Pump N’ Brow and lips were finished off with Rouge Dior lip balm.

Photography by Sophie Tajan for Christian Dior Parfums
Get the best of FASHION in your inbox Thanks for signing up!
The latest fashion, beauty and celeb news delivered right to your email #FASHIONforall Now, check your inbox to complete your subscription
We won’t ever use your email address for anything else
Want even more FASHION? Follow us on social media.