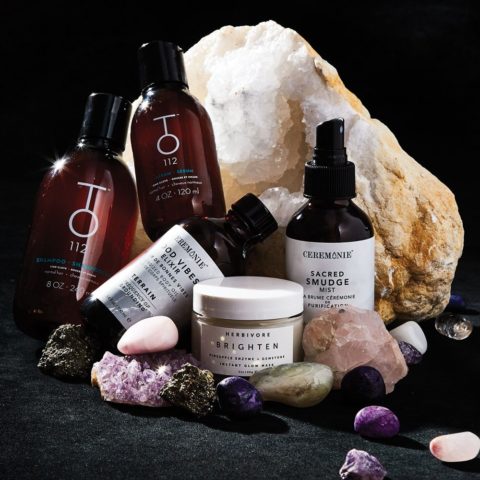 Why Is Everyone Using Crystals in Their Beauty Routine?

On the final season of MTV’s The Hills in 2010, Spencer Pratt held a crystal to his forehead after a fight with his sister, Stephanie, while a friend told him, “You’re crazy! You’ve lost it.” Pratt has reportedly spent close to $1 million on gemstones. This may seem extreme, but there’s growing evidence that crystals are having a mainstream moment.

Case in point: The Hoodwitch, a New Age online retailer and Instagram sensation (@thehoodwitch) run by Bri Luna, has over 100,000 followers; international retailer Free People carries crystal necklaces; and, in the beauty world, Glossier’s Haloscope highlighter, which is enriched with real rose quartz and golden topaz crystals, is becoming a cult fave.

Hair colourist Luis Pacheco, founder of Medulla & Co. salons in Toronto, is an unabashed crystal enthusiast. An avid yogi who has studied holistic nutrition and herbology, Pacheco says there was a time when he struggled with the disconnect between his personal interests and his professional life. “I’d question what I did for a living—it was very superficial,” he says. So in 2014, he created TO112, a line of hair and body products that is stored in a vibrating, singing room and surrounded by rose quartz crystals. Come again? “It’s a room that vibrates with surround sound at a 528-hertz frequency,” says Pacheco. “These sound vibrations permeate the products and change them on a molecular level.” According to the Solfeggio scale—an ancient six-tone scale used in sacred music—this frequency is associated with self-love and transformation.

Pacheco says the secret to TO112’s feel-good vibe is the water in the products, which is infused with this self-love harmony. When creating the line, he was influenced by the late Masaru Emoto, a doctor of alternative medicine who wrote The Secret Life of Water. In his studies, the Japanese researcher described water’s ability to change depending on its surroundings. Emoto kept various containers of water, exposing some to positive words, sounds and thoughts and others to negativity. Then he froze them. The water that was surrounded by positivity formed beautiful ice crystals while the water that was exposed to negativity formed murky and mutated ones.

Mimi Young, founder of Vancouver-based skin- and aura-care brand Ceremonie, is also a fan of Emoto. “He made breakthroughs in understanding how consciousness and intention can shape matter,” she says. Young began practising self-hypnotherapy in 2014. “During one of my meditations, I accidentally accessed a realm that was unfamiliar to me—a place where spirits dwell.” She later sought out a shamanic practitioner to learn about formal tools and languages to support her practice. Young’s products are cleansed and blessed via shamanic rituals that she performs. “I [create] a vibrational frequency that is then passed on to the products themselves.”

Every step of the process is spiritual, Young says, from the music she plays while blessing the products (she also uses frequencies from the Solfeggio scale) to how she ships them (“all parcels are anointed with sage oil and sent with protective plant and animal spirits”). In fact, even her mood matters. “I don’t work when I’m frustrated or drained in case it affects the products,” she says.

So what comes first, skincare or spirit care? For Willie Freitas, brand educator of Seattle-based company Herbivore Botanicals, they’re equally important. The company makes a brightening mask that’s infused with Brazilian tourmaline, one of only a handful of minerals in the world that emit far infrared rays, which he says penetrate beyond the body and into the spirit, detoxifying the mind of negativity. “I like to call this spiritual science,” says Freitas. Since the mask sits on your face for a while, it gives the tourmaline time to absorb beyond your skin.

But even if you’re more of an intrigued skeptic than a crystal-pressed-to-forehead diehard, Pacheco encourages you to embrace the changes that may arise. In fact, many of his customers initially laugh off the spiritual aspect of TO112, but then the products become staples in their shower because they notice their moods improve. “Maybe the placebo effect is just a connection,” he says. “To me, it doesn’t matter. What matters is that it’s creating little shifts and differences.”

Photography by Carlo Mendoza
Get the best of FASHION in your inbox Thanks for signing up!
The latest fashion, beauty and celeb news delivered right to your email #FASHIONforall Now, check your inbox to complete your subscription
We won’t ever use your email address for anything else
Want even more FASHION? Follow us on social media.