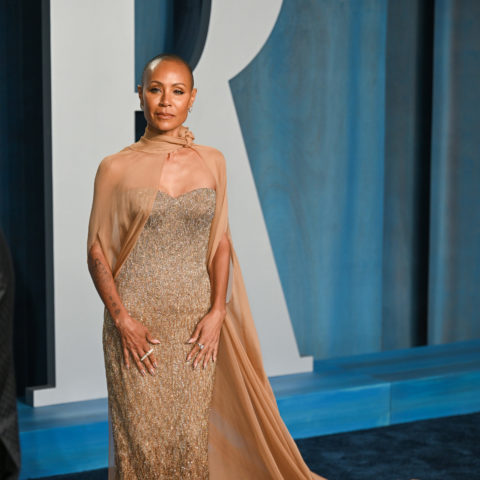 The actor has been open with her fans about her struggle with alopecia areata.

When Will Smith struck Chris Rock at the Oscars this past Sunday, the slap was seen and heard around the world. Rock made a tasteless joke about Jada Pinkett Smith’s shaved head, saying, “Jada, I love you. GI Jane 2, can’t wait to see you,” referencing the transformation Demi Moore underwent in the 1997 film G.I. Jane. Will, in turn, made the reckless decision to get violent.

Moments after, Smith went up on stage to accept his Best Actor win for King Richard, in which he played Richard Williams, the father and coach of tennis legends Venus and Serena.

The next day, he took to Instagram to issue a public apology to Rock. “Jokes at my expense are a part of the job,” he wrote, “but a joke about Jada’s medical condition was too much for me to bear and I reacted emotionally.”

Jada Pinkett Smith broke her silence about her alopecia areata diagnosis in 2018 in an episode of her Facebook Watch talk show, Red Table Talk. “It was terrifying when it first started,” she said of her struggle with hair loss. “I was in the shower one day and had just handfuls of hair in my hands and I was just like, ‘Oh my God, am I going bald?’”

She continued to explain: “It was one of those times in my life where I was literally shaking with fear. That’s why I cut my hair — and why I continue to cut it…My hair has been a big part of me. Taking care of my hair has been a beautiful ritual. And having the choice to have hair or not, and then one day to be like, ‘Oh, my God, I might not have the choice.’”

Alopecia is a common autoimmune skin disease that can affect your scalp or your entire body, and the resulting hair loss can be temporary or permanent. It can be the result of heredity, hormonal changes, medical conditions or a normal part of aging.

There are different forms of alopecia, but the kind Pinkett Smith struggles with often causes patches of baldness on the scalp, and there is no cure…at least not yet. According to the Canadian Alopecia Areata Foundation, the disease is unpredictable, and more research is urgently needed. What we do know is that it’s cyclical, meaning those with alopecia areata go through phases of hair regrowth and loss.

Over the last few years, Pinkett Smith was often seen sporting either a short, cropped hairdo or with her hair covered in headwraps or turbans. But this past summer, she finally made the decision to shave her head. In an Instagram post, she attributed the decision to her daughter, Willow. In September, during an episode of Red Table Talk, she opened up even more, calling the cut a form of “expression and release.”

“I’m so glad I did it,” she said. “It was such a beautiful experience and such a freedom. I feel more connected to myself and to the great divine in a very special way…I’m just done with the worry. I’m done with the care. I’m just done.”

As the butt of Rock’s joke on Sunday, Jada Pinkett Smith was seen rolling her eyes in disgust, signifying that Rock’s insensitive remark about alopecia areata, a condition more often than not described as a traumatic experience with quite severe psychological impacts, was no laughing matter.

Pinkett Smith made a brave and bold decision to shave her head last year. Our hair is intrinsically tied to our identity, and the decision to let it go is not an easy one. To see her ridiculed, even as a joke, in front of industry peers and on national TV, was disheartening. But it would seem that Pinkett Smith isn’t here to dwell on the drama. The actress shared on Instagram this morning, “This is a season for healing and I’m here for it.” Us, too!