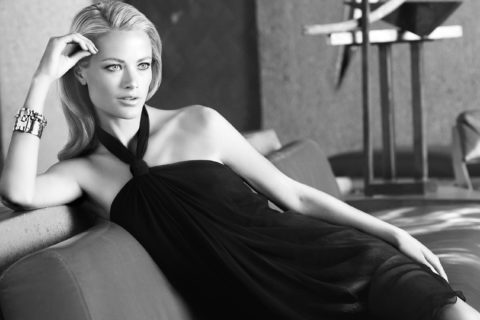 "I put a lot of pressure on myself to do everything — to be the mother, the father, the breadwinner, to be in the public eye. That pressure can be intense."

The word “iconic” is tossed around with reckless abandon these days, peppered generously throughout social media captions and comments, making it difficult to avoid and nearly impossible to discern the ironic from the genuine. (Was that Twitter exchange between two fast food chains truly iconic? Debatable.) Luckily, every once in a while we’re reminded of those pop culture figures who have stood the test of time and left a lasting impression on their industry. Enter: Carolyn Murphy. The supermodel was named Vogue/VH1 Model of the Year Award in 1998 and has appeared on countless magazine covers and runways throughout her career, which has spanned over 30 years — and counting.

Perhaps her most well-known role is as the fresh face in over 100 (!) Estée Lauder campaigns. This year, Murphy is celebrating her 20th year with the brand, making it one of the longest partnerships in the beauty industry. Iconic, non? To make things even more celebratory, Murphy’s 20-year anniversary just so happens to coincide with the brand’s 75th anniversary. In honour of these milestones, we caught up with Carolyn Murphy to learn about the last 20 years of her career with Estée Lauder.

Is there a particular moment working with the Estée Lauder brand that you’ll never forget?

“Definitely the beginning. I’d just had my daughter and I was still breastfeeding — there was milk everywhere,” she laughs. “When I first got to the office to meet Leonard and Aerin Lauder, it was kind of like a Pretty Woman moment. I had been living on a farm and was definitely out of touch with beauty and fashion so I had on a white button-down, a pair of slacks and flats, no makeup, my hair pulled back. Aerin Lauder pulled me aside and said, ‘You have a couple of hours, maybe go zhuzh up a little more.’ It was said in a way of empowering me and [encouraging] me to have fun with it. So I got my hair done, I got some makeup, and I bought this really sexy outfit and a pair of heels. Then that first shoot that we did for Advanced Night Repair, I was still nursing and my daughter was on set, and I wasn’t feeling my sexiest because I’d just gotten a divorce. I just remember being on set and feeling so beautiful in this beige negligee. When I saw the ad I was like, ‘Wow I didn’t know I could look like that.’ I didn’t know that I could look sexy. Those moments are special.”

Speaking of growing up on a farm, you’re known for your love of nature and animals. How does that influence your work?

“We all have our places of solace and that is it for me,” says Murphy. “Being more of an introvert, and being raised with a reverence for nature, that’s just what makes me feel good. I think we all have a duality to us in some way or another, and a lot of people, especially during the time of COVID, have learned the importance of being in nature. That has been a real luxury for me. Having the job that I do has afforded me to spend more time with my daughter and to be in nature more.”

Knowing what you know now, what advice would you give to your younger self about your industry?

“Relax a bit more and [don’t] try to do it all,” says Murphy. In the past, “I put a lot of pressure on myself to do everything — to be the mother, the father, the breadwinner, to be in the public eye. That pressure can be intense, but I used to feel guilty when I said I needed to take time off. So I would say to my younger self to make sure that I follow my heart and to not [feel the need] to explain myself.”

How has your beauty routine changed during quarantine?

“I have more time on my hands, so I’m experimenting more and indulging more for sure,” says Murphy. “A nightly bath was a real treat [before] but now I’m like ‘OK, it’s that time again.’ Also my daughter and I have our beauty nights on Sundays — I didn’t know this but I guess it’s called ‘self-care Sunday’ — and she’s like ‘Mom, you should probably be taking more pictures and posting when you have your Advanced Night Repair Mask on.'”