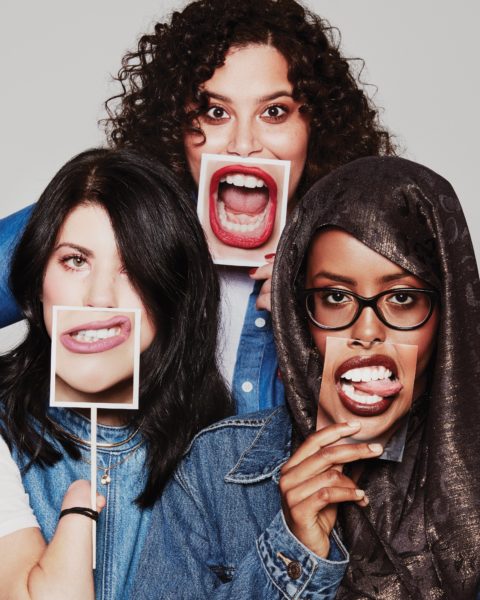 Thousands of T-shirts can’t be wrong: The future really is female. Especially when it comes to comedy. Funniness, like feminism, is best when it’s intersectional. Meet Canada’s newest comedic stars.

Canadian comedy fans see more of Courtney Gilmour than they do of their own friends. Did you take in shows at the JFL42 comedy festival? For two years running, Gilmour has been one of the only Canadian women included in the 42 acts. Making the pilgrimage to Just for Laughs in Montreal? Last year, she was the first woman in the competition’s 19-year history to win the Homegrown Comic Competition, and this year she did a Comedy Network taping at the fest. She has also opened for Chris Gethard and Sasheer Zamata. Gilmour, 33, is everywhere. Zaniest of all? This is only the Waterloo, Ont., native’s first year doing standup full-time.

Gilmour, who was born without a left leg or forearms, delves into her experiences with disability in her act. She talks about how some people seem let down by her origin story—so she makes up new ones. Her favourite? Abortion survivor. “I fought back!” she crows. “I had someone describe my comedy as ‘a tiny woman screaming vulnerabilities at you,’” says Gilmour. “And I loved that.” She skewers people’s reactions to what she affectionately refers to as her “nubs,” describing a cab driver who equated her lack of limbs with his wife’s occasional back problems.

Hearing what Gilmour has to endure is jaw-dropping at times, but in an entertainment world populated almost entirely by able-bodied folks, it’s a narrative we don’t hear enough. “I’m annoyed when people ask if I feel obligated to talk about being an amputee or ‘How do you balance writing that material with regular material?’” she says. “If I wanted to tell [amputee] jokes just to get it out of the way, I’d write hacky puns about hand jobs or whatever. Being an amputee is my life, and I need to talk about it. It’s funny how people think of it as a novelty act and then a guy goes up and does 15 minutes on how crazy his girlfriend is and no one’s like ‘Oh, it’s the Crazy Girlfriend guy!’”

Most people know that there is some small element of risk in choosing a front-row seat at a comedy show. There’s always a chance that the comic might tease you a little. At a Hoodo Hersi show, however, no one is safe. The Toronto-based comedian, 27, keeps up a running commentary on the audience’s reactions to her work. Hersi, for example, will launch into her bit about the Muslim ban. “I’m fine with it,” she says. “Like, I want to ban white guys who go to Thailand.” The laughter crescendoes and then Hersi pauses, a mischievous smile on her face. “There’s always one white girl in the audience who’s like, ‘My dad’s been to Thailand, like, four times, so this joke is not for me.’”

Hersi fearlessly tackles race, religion and gender. Or, as she puts it, “all the fun stuff!” Audiences are wild for it. This year alone, she was named a Homegrown Talent at Just for Laughs and taped a performance that will air on the Comedy Network. She has done CBC tapings at the Winnipeg Comedy Festival and the BBC World Service Montreal comedy show and was selected as an Audible New Voice at SF Sketchfest. She has also opened for Gina Yashere, Moshe Kasher and Eric Andre. Once a month, she co-hosts The Ebony Tide, a showcase for comedians of colour. “One of the goals is for people to understand why terms like ‘black comedy’ and ‘ethnic humour’ just don’t make sense,” she explains.

In a comedy scene often dominated by white men, it is refreshing to see a black Muslim woman performing in a hijab. Hersi takes the occasional cringe-inducing comment and incorporates it into her act. She remembers when a woman told her she was so brave for doing what she does, clad in her “Muslim garb.” “This is from Forever 21!” cries Hersi. “I’m culturally appropriating my own culture! I’m part of the problem!” The room erupts into laughter, but Hersi is already moving on to the next bit: no hesitation, no apologies. “No segues!” she announces. “Next joke!”

Day after day, Anasimone George went off to her interior design classes. And day after day, she hated her life a little bit more. She detested design school but felt obligated—to her family, to her Egyptian-Canadian community—to get a degree. Then she flunked out. She got a job working at Starbucks as a supervisor. Loathed that, too. Finally, George says, she knew it was time to turn to her true love: comedy. “I had already failed so much, I literally had nothing to lose.”

Her first few months onstage were rocky. “A lot of my old stuff came from a place of trying to fit in, and a lot of my work reflected a ton of internalized misogyny and racism. And if I ever tried [to discuss these issues], I was deemed ‘the girl who talks about race too much.’ But once I grew out of caring what the white gaze wanted, I figured out my voice.”

There was just one problem: Now that she had something to say, there weren’t many places to say it. Sick of waiting around for bookers to give a queer WOC more stage time, she took matters into her own hands and started a monthly comedy night, SHADE, to showcase people of colour, LGBTQ+ folks and woman-identified and non-binary people. “I wanted to create a home for marginalized performers—and make money and actually pay people,” she says. SHADE sells out every month. George—who hails from Scarborough, Ont., and is just 25—is a raucous, engaging host with a big head of curls, her curves barely contained in hot pants, knee-high boots, mesh bodysuits and plunging tops that offer a peek at her ornate breastplate tattoo. Pump-up jams blare from the speakers and make it feel less like a standup show and more like a party. George’s confidence is awe-inspiring—and infectious. She remembers one show where a young woman of colour came up to her afterwards and told her that she was so happy to see someone like herself on a stage. “That shit really melts my heart and makes me tear up every time I think about it,” she says.