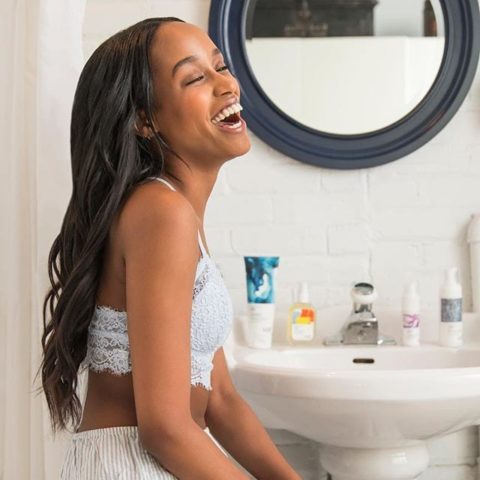 From Bite Beauty to MAC Cosmetics, Canada has produced some pretty big names in the beauty industry over the years. Their successes have inspired further crops of Canadian entrepreneurs to dream up their own ideas and we got to talk with four of these up-and-comers about the stories behind their products. From Vancouver-born company Well Kept, who aim to tackle plastic pollution, to the all-women team at Veriphy Skincare, who created a scholarship to support young girls studying STEM, these are four Canadian-made beauty brands that deserve to be added to your shopping list.

This Vancouver-based beauty brand got its start when co-founders Emilie Johnson and Natalie Farrell were trying to live a more sustainable lifestyle but shared a dilemma when it came to shaving. “Emilie got stuck on not being able to find an alternative for her plastic, baby blue razor,” says Farrell. With disposable razor heads taking an unnecessary toll on the environment, Johnson and Farrell wanted a greener alternative and noticed that men seemed to have a plethora of options, but the choices for women were limited. For example, “safety razors” (which feature refillable metal blades that can be completely recycled) were almost exclusively targeted to men. Thus, Well Kept was born and the pair soon launched their own variation on the “safety razor” with females in mind. Despite the up-front cost being more expensive (Well Kept’s is priced at $68) it’s more cost-efficient in the long run. The blades are a fraction of the price of traditional refills–as low as $0.10 if you buy in bulk. And let’s not forget about one of the best benefits of the safety razor: a closer, smoother shave.

The closer we are to nature, the better off we'll be?. Our products are developed and manufactured in Canada, using the highest quality natural ingredients. #beauty #skin #skincare #skincareroutine #canada #veriphyskincare #moisturizer #glow #nature #natural

Veriphy Skincare came about when the University of Guelph accidentally discovered a powerful new ingredient, PhytoSpherix™. Composed of phytoglycogen, the all-natural substance fuels skin cells, helping them to rejuvenate and revitalize naturally. This in-turn boosts the production of elastin, collagen and hyaluronic acid. Glycogen was previously only available through extraction from animal muscles and livers, so the discovery of this plant-based version was a game-changer and its skin-benefitting factors made it ideal for products.

Together, Alison Crumblehulme and Jessica Kizovski took the science behind  PhytoSpherix™ and developed Veriphy which has three items–a moisturizer, eye cream and serum–and their all-women team has grown to four. “Working on an all-female team has been a very empowering experience,” says Crumblehulme, Veriphy’s president. “It’s a refreshing environment, one free of career limitation due to gender.” The team even created a scholarship through the University of Guelph to keep supporting women in STEM.

When applying false eyelashes, let the glue dry a little bit first so it's nice and tacky. Like your man's ex. ??

Emily Lyons, CEO and founder of Toronto-based modelling agency Femme Fatale Media, was working a fashion event when some of her models began having allergic reactions to the lash glue they were wearing. It made Lyons question the ingredients. “After doing some research, I learned that a lot of big-brand cosmetic products are filled with harsh, synthetic chemicals,” she says. “Some of these chemicals are even classified by scientists as mutagenic–meaning they can change the DNA in your cells and potentially cause cancer.”

With the help of a team of chemists, Lyons created True Glue , the first all-natural lash glue on the market, formulated with a mild, diluted synthetic polymer and calming chamomile and castor oils. Though the company began launched with the adhesive, it’s grown to include makeup items such as lip glosses and mascaras, using natural ingredients like cocoa seed butter, licorice root extract and xanthan gum. “I think that a lot of the time we forget just how rich and diverse nature is,” says Lyons. We forget that nature is a treasure trove with hundreds of thousands of compounds that can nourish humans in many different ways.”

We're dreaming up new products to add to our colourful collection!?We want to know: what is your ☁️DREAM☁️ Voir product?⠀ ⠀ Let us know in the comments below?

Every product from Voir Haircare celebrates the company’s Canadian roots and is inspired by the nature and ever-changing seasons found up North. “We use captivating artistry, imaginative product names and custom-blended fragrances and formula textures to create a true sensory experience that feels like an escape to the Canadian wild,” says co-founder, Nia Schindle.

Founded in 2017, the company has released four products so far including an an Invisible Dry Shampoo & Conditioner, a Hair Masque & Scalp Detox and a Soft Styling Foam. Their multi-use Luxury Hair Oil is a favourite, acting as a shine booster, detangler, leave-in treatment and heat shield. With success in top retailers like Hudson’s Bay, Free People, Urban Outfitters and Riley Rose, they plan to add an additional six SKUs in 2019. “We’re so grateful for the women who took a chance on our brand in our first year,” says Schindle. “It’s been incredible watching them fall in love with the products.”