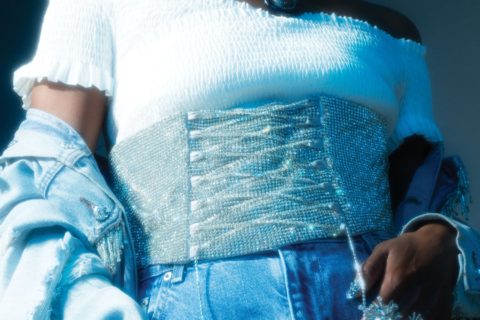 Flashy nail art challenges notions about beauty as it relates to identity, class and femininity — & it's finally getting the respect it deserves.

In 2012, Rihanna posted a video clip of herself fixing her broken acrylic nail with Krazy Glue. I watched it over and over, squinting to get a closer look at what patterns adorned her always-striking nails. RiRi’s not alone in her love for mesmerizing tips; Cardi B, Teyana Taylor and Nicki Minaj are rarely seen without long, often crystal-encrusted nails.

Yet there was a time when talons covered in glitter and studs were seen as gaudy. It was trailblazers in the ’90s, like Lil’ Kim, Foxy Brown and Mary J. Blige, who introduced them to the mainstream. And the woman behind them all was manicurist Bernadette Thompson, who single-handedly brought blinged-out tips to the fashion world, challenging notions about beauty as it relates to identity, class and femininity.

Thompson honed her aesthetic at her nail salon in Yonkers, N.Y. “I was doing rhinestones and graffiti on nails,” she says at Concept, a pop-up location at Yorkdale mall in Toronto where she set up shop this past May. She credits her artistic nature to growing up in a low-income neighbourhood. “When you don’t have a lot, you find ways to make things work,” she says, adding that nail art exists because people get creative with what they have. (Thompson has used everything from string to hair to create intricate patterns and designs.)

But her life took an exciting turn when Mary J. Blige’s sister, LaTonya, with whom Thompson grew up, stopped by for a manicure. Shortly after, Mary sent a limo to Thompson’s shop and whisked her away. “That was it,” she says. “I’ve never looked back.” Soon, word of Thompson’s work spread and she quickly became the go-to manicurist for hip-hop and R&B artists.

It was on the set of a Bad Boy Records album shoot that Thompson met Connie Hansen and Russell Peacock (of the photography duo Guzman). Hansen noticed the impressive nails Thompson had created and took her to a Louis Vuitton shoot the following week. “They wanted something different,” says Thompson, so she crafted nails that resembled the painted canvas of Louis Vuitton handbags. She then became a regular on editorial sets, where she’d name-drop her main clients (Mary J. Blige, Lil’ Kim and Missy Elliott), telling the teams to do shoots with these women, who were leading the hip-hop industry at the time. Eventually, it worked. All three appeared in the September 1998 issue of Vogue. Of course, Thompson was the manicurist on set.

Even as her career flourished, Thompson had to advocate for her style. “I worked hard to change the minds of magazine editors—to have them see nail art in a different way,” she says. On set, she would expect to be asked for intricate designs, but editors, flustered at the still-new concept of nail art, would request a solid coat of polish. Thompson is largely responsible for nails eventually becoming a major element of fashion shoots. “I fought for more manicurists on set, for more nails in fashion ads and for credits,” she says, adding that even though manicurists were on set for the same amount of time as hair and makeup teams, back then, their names wouldn’t make it into the credits.

These days, a lot has changed. Hip-hop and R&B dominate music charts, bringing other aspects of the culture into the mainstream, including beauty. Thompson still spends her days on sets, where OTT nail designs are now the norm. While she’s thrilled about the acceptance and widespread popularity of nail art, she still has a bone to pick with the industry’s accreditation issues. “Fashion has always gotten inspiration from hip-hop,” she says, noting that designers have long confided in her that they travel to inner cities for ideas. She has no qualms with this as long as proper credit is given to the source.

So while many of today’s youth may attribute sparkly coffin nails to Kylie Jenner, Thompson believes it’s up to people to educate themselves about the origins of the looks they love and to rectify the industry’s appropriation issues. She says her goal all along has been to change people’s attitudes toward different subcultures and their aesthetics. “I want to show that people in hip-hop have something to contribute to fashion,” she says. The way Thompson sees it, opening up the fashion industry can only expand it.