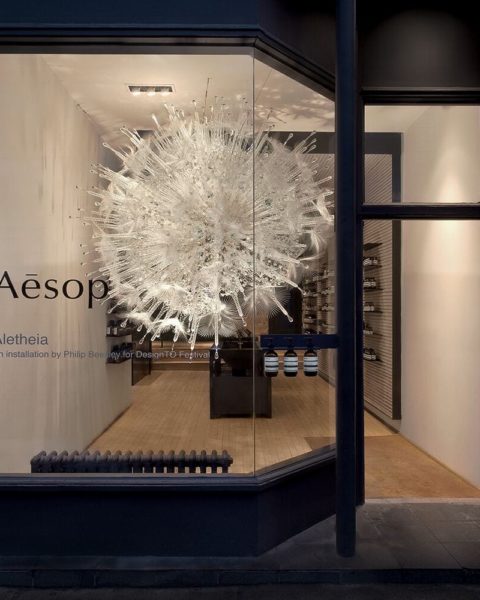 “We selected ‘Aletheia’ because the idea behind the sculpture embodies our shared philosophies.”

Suspended from the ceiling inside Aesop‘s Queen Street West is a piece of artwork entitled Aletheia by Toronto-based designer Philip Beesley. It’s there to commemorate DesignTO, Canada’s largest cultural celebration of design, now in its ninth year. Beesley will be in-store later this evening to present his creation, which also recently appeared in “Transforming Space,” a dual exhibition held with fashion designer Iris van Herpen at Toronto’s Royal Ontario Museum this past summer.

Known for its sustainable store designs and plant-based skincare, Aesop has a history of supporting local artists, often calling on designers and architects in the designs of their retail spaces. “It is always a pleasure to showcase likeminded creative spirits within our spaces. We found a natural kinship with Philip Beesley—we recently launched this year’s Gift Kits, ‘Atlas of Attraction,’ a shared effort with mutual collaborator, Iris van Herpen,” said Marsha Meredith, Aesop’s creative director in a press release. The piece mimics the shape of a head’s bone formations outlined by a thin membrane that motions in response to its environment. It also features a spherical meshwork of spines, fronds, and glasswork.

Beesley, who’s a part of the Waterloo Architecture and Living Architecture Systems Group, drew his inspiration for Aletheia from a philosophy of deep interconnectedness. “I love the sense that these interwoven, intermeshed forms might also support a kind of collective consciousness,” says Beesley. “Perhaps the hovering sphere of Aletheia’s form might act as a kind of thinking skin for the earth.”

You can see Beesley’s artwork at Aesop Queen Street West until Jan. 27.

PHOTO COURTESY OF AESOP.
Get the best of FASHION in your inbox Thanks for signing up!
The latest fashion, beauty and celeb news delivered right to your email #FASHIONforall Now, check your inbox to complete your subscription
We won’t ever use your email address for anything else
Want even more FASHION? Follow us on social media.