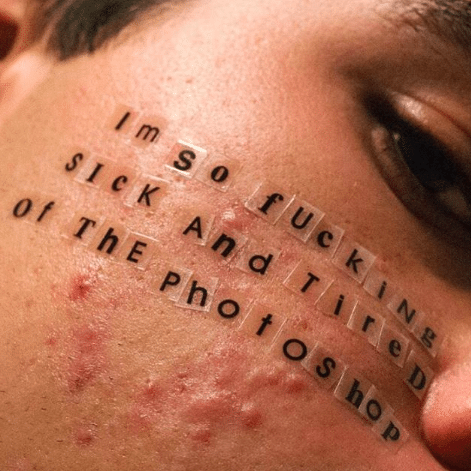 Is Acne Acceptance Next in the Beauty Industry’s Body Positivity Movement?

And is it time to throw out your zit cream?

Acne is having a full-fledged moment in the beauty industry right now. Yes, really.

It seemed to kick off back in 2016 at Milan Men’s Fashion Week. Malaysian designer Moto Guo sent models down the runway with faces full of acne, causing an absolute stir online.

It was unclear whether the pimples were real, or created using makeup, but M.A.C makeup artist Roberta Betti posted a photo from backstage pre-show, with the following caption:

“Pimples and rashes are in fashion Now!!! This is the make-up created by me.”

Pimples and rashes are in fashion Now!!! This is the make-up created by me @Motoguo ! #maccosmetics #macbackstage #mfw #motoguo #lovemyjob

Beauty ‘mishaps’ being repurposed as runway trends is, of course, not a new concept. We wrote a story about this very thing a couple of years ago, when Spring 2015 trends included sweaty foreheads and smudged mascara.

#LoveYourself – S/O to my amazing cousin @kellydevito for letting me photograph her keloids?Keloids are raised scars that occur when wounds do not heal properly and infection breaks through the top of the skin. My cousin has hers as a result of acne scarring.

But showcasing—and even glamorizing—acne, of all things, remains a relatively shocking concept. Acne. Pimples, blackheads, whiteheads and the like are usually seen as problems that need fixing—fast. Terms like acne-fighting, acne-banishing, blackhead-clearing, pimple-popping, are plastered over the aisles of every drugstore and department store beauty section. Changing that, if that’s indeed where we’re headed, will take time. And a lot more acne on the runway and on social media.

It's so wrong that if I had taken that picture of myself, then I wouldn't have posted it #repost @freethenipple @suffocate ❤️thank you to women who are brave. shot by @peterdevito

Which brings us to 20-year-old photographer Peter DeVito, a student studying illustration at the Fashion Institute of Technology, whose photo series “#AcneIsNormal, is currently exploding all over Instagram.

“I was really inspired because a lot of people on social media started posting things about body positivity and self-acceptance, but I felt like there was an absence of people with acne,” DeVito said in an interview.

His photos have been shared by celebs like Draya Michele, Barbara Ferreira and Cara Delevigne. In fact, when Delevingne shared one of DeVito’s photos, she included a caption admitting that had it been a photo of her skin, she wouldn’t have shared it.

In response to Delevingne sharing his photo, DeVito says, “It was crazy to see somebody who gets a lot of her pictures retouched all the time agree with what I was saying.”

#AcneIsNormal – In 2017, I took barely any pictures of myself because I hated the way my skin looked. In 2018, I'm going to take as many as possible because even with my acne, I still look better than most of y'all headass bitches? *this is probably the last acne word portrait I'm doing of myself, but I'm going to pursue different projects that have to do with acne?*

Even Kendall Jenner, who showed up to the 2018 Golden Globes with visible acne on her cheek, tweeted an acne-positive response to a fan who commented on her skin.

So if even Kendall Jenner, a model whose face is literally her source of income, is cool with acne, does that mean acne is…cool?

For now, it’s safe to say that you’ll likely be seeing more zits in beauty campaigns, on Instagram and on the runway. But the question that remains is: how will brands and their product offerings be affected?

In a widely publicized move toward body positivity in the beauty industry, last summer, Allure Editor-in-Chief Michelle Lee, announced that the magazine and website would no longer use the term “anti-aging.” It was a huge move, no doubt, and one that left us wondering what kind of ripple-effect influence would this have on beauty brands, if any at all. Will skincare brands soon begin phasing out the term “anti-aging,” too? It’s far too soon to tell, but it’s unlikely. And that’s because this movement isn’t about being anti-anti-aging or being anti-anti-acne. It’s about having the freedom to choose what you do with your skin. And your face. And your body.

Whatever the future holds for anti-acne (and anti-aging) products, perhaps the most important takeaway from these industry-changing statements is that consumers are being given more power. Having the choice to treat and conceal acne or to display it proudly, without the fear of social backlash, is a major turning point in the industry.

So should you throw away your zit cream? It’s up to you. And that’s exactly the point.