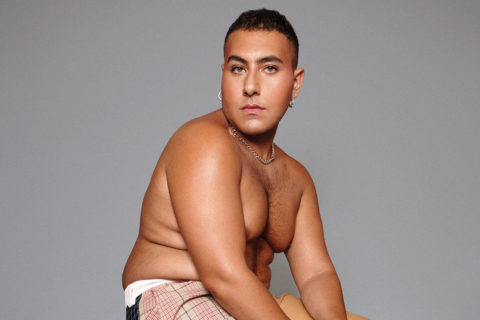 “For men, the idea of body image is still so taboo. It feels like we’re centuries behind in comparison to the kinds of conversations about body image that women are having."

This past summer, Egyptian-Canadian model-influencer Mina Gerges appeared on the inaugural season of Canada’s Drag Race as a member of its “Pit Crew”—the underwear-clad male models who assist with various segments of the show. Though racially diverse, the members of this squad, on both the Canadian and American iterations of the show, have one thing in common: six-pack abs.

Gerges became the first member of the Pit Crew who didn’t fit into that archetypal male model mould and received a flood of messages—both positive and negative—following his first television appearance. “I was called disgusting, ugly, a pig, saw the vomit emoji a lot, and was told that I need to go to the gym and lose weight,” Gerges wrote in an emotional post on Instagram. He tried to shut all that out and focus on the positive impact instead. “A lot of queer men comment that this is the first time they’ve seen a body like theirs represented and that they hope to one day have the same level of confidence that I have,” he later told FASHION.

In 2015, Gerges’s Instagram account went viral after an article appeared on BuzzFeed.com about his tongue-in-cheek recreations of iconic red carpet outfits. Since then, he has been featured on TeenVogue.com and worked with brands like Sephora and Calvin Klein; both reached out to him directly online, so eager were they to include him in their campaigns. But despite having signed with Toronto’s B&M Models last year, he finds that consistent modelling work as a plus-size male model is not easy to come by. What the industry needs, he says, is to go beyond featuring models in one-off circumstances for the sake of diversity and focus on more consistent representation.

Ever since I was a little kid, I was taught that I needed to have a six pack to be attractive and to be valuable. My body was never good enough unless it was thinner, tighter, and more muscular. ⁣ ⁣ Social media taught me that if I wanted to grow my following and be featured on all those hot guy Instagram pages, that I needed to lose weight. That I couldn’t have stretch marks or rolls because that’s not what’s considered attractive.⁣ ⁣ Being a guy means normalizing things like diet culture and never taking about the immense pressure and loneliness we feel because of those unattainable beauty standards. And worst of all, talking about it and being vulnerable means we’re not good enough. It means we’re not “manly” enough. ⁣ ⁣ Self love has helped me unlearn all of that; it’s helped me see value in my body at whatever shape or size it’s in. It’s freed me from living my life trapped in this idea that I must aspire to change my body and make it thinner to be happy. Self confidence is the reason I look at this picture and love every little curve and stretch mark on my body. ⁣ ⁣ I hope this little sprinkle of body positivity on your timeline puts a smile on your face and helps you overcome any self-doubt you may have today. ?⁣ ⁣ Photo from my interview with @teenvogue, shot by @colingaudet45

“I always feel like the odd one out,” Gerges says of his on-set experiences. “That process of tokenism almost makes me feel like I’m a problem. Sometimes it’s hard for stylists to find clothing that fits, or sometimes they don’t know how to style me because they’re not used to working with bigger guys.”

But Gerges is determined to help bring about change. He was raised between Cairo and Abu Dhabi, and it was only when he moved to Canada with his family at the age of 12 that he first encountered the terms “gay” and “queer” and began Googling “gay men.” “All I saw were extremely muscular white men,” he recalls. This led him to conclude that there was only one “right” way to look as a gay man. He became consumed with his physicality and battled body dysmorphia and eating disorders during his early years at Western University, in London, Ont., where he received a degree in media and the public interest.

“The first thing I would think about when I woke up was my body and how much I weighed,” he says. “The entire purpose of my life was to have a six-pack and that was it. It was traumatizing and exhausting.” To make matters worse, when he first confessed to his mother that he was suffering from an eating disorder, she dismissed it. “She laughed in my face and said, ‘Guys don’t have eating disorders; only women do,’” he says. “I felt so lonely. I knew I needed help, and hearing that from my mom made me feel more isolated.”

So instead of seeking professional help, Gerges took matters into his own hands and pulled back from his presence both in the gym and on social media. “Going to the gym every day makes you naturally critique your body all the time,” he says, adding that he also hid all the mirrors in his house. “I felt an inner peace that came with freeing myself from needing to prioritize how my body looked.”

I showed this pic to my friend before i posted it and he gasped and said “omg I’d never post this if you could see my rolls like that!!!” And it’s crazy because we literally all have rolls and we shouldn’t feel embarrassed or ashamed about it. Especially when we sit… like where are they supposed to go!?!??! ⁣ ⁣ So here’s me looking absolutely flawless with these cute rolls!!! ??

He also began taking periodic breaks from Instagram. “I realized that it was contributing to the self-hatred, because I was saving pictures of muscular guys or following fitness pages that only showed muscular bodies with thousands of likes or thousands of comments,” says Gerges, noting that seeing this online praise can skew one’s own feelings of self-worth. “I started cleansing my social media of all these images that made me hate myself because I looked so different from them.”

Gerges now views the gym as a space that helps him with his mental and physical health rather than a place for body modification. He has also been moving away from “body positivity” as an aspirational concept.

Understanding how social media fuelled his insecurities is a key reason why he now uses his own platform—Gerges has over 100,000 followers on Instagram—to create a space where men of all sizes and shapes can see themselves reflected and respected.

“For men, the idea of body image is still so taboo,” he says. “It feels like we’re centuries behind in comparison to the kinds of conversations about body image that women are having. When I first started seeing curvier women and plus-size women in fashion, that changed my life. I’d see the stretch marks or the cellulite, which I also have, and think ‘If they can look that confident and beautiful, so can I.’ I’m taking that moment of looking up to plus-size women and bringing that to my work so men can feel seen, too.”

Photography by Colin Gaudet
Get the best of FASHION in your inbox Thanks for signing up!
The latest fashion, beauty and celeb news delivered right to your email #FASHIONforall Now, check your inbox to complete your subscription
We won’t ever use your email address for anything else
Want even more FASHION? Follow us on social media.