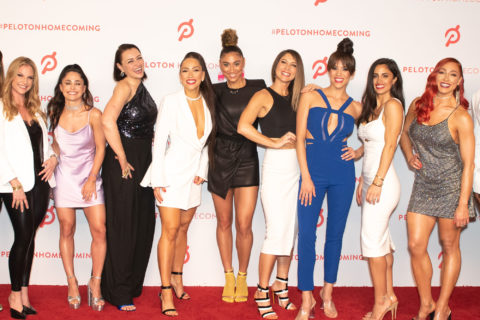 Walkout music blasts through the sound system and stage lights illuminate the room as two security guards escort Jessica King to her spin bike at the front of Peloton’s New York City Cycling Studio. She enters her 4:30 pm Hip Hop class like a championship boxer entering the ring—hooded silk robe and screaming, camera-phone snapping crowd included. There is, however, one clear distinction: King’s cloak is pink and is bedazzled with a unicorn and rainbow wings, and underneath, she’s wearing pink leggings and a Peloton-branded tie-dye sports bra.

When slips off her robe and steps onto the bike, she’s speaking through a wireless headset to both the 48 riders in the room and the thousands in their home gyms, living rooms, garages etc. When the broadcast goes live onto the screens of Peloton bikes across Canada and the United States, King assumes a number of roles: she’s at once a cycling instructor, an on-camera entertainer and a motivational speaker. She does it all flawlessly, making it through the 45-minute ride without breaking a sweat; her hair and makeup (done by her very own glam team) still picture perfect.

After the spin class, she meets the riders out front of the studio for a group photo where again, she’s escorted by two security guards. It’s Homecoming weekend for the Peloton community, which means most of those who participated in King’s class have travelled across the country for this photo op. She’s whisked away by security before anyone can grab a selfie of their own or attempt to share their intimate stories with the spin instructor. For that, they’ll have to line up at a meet and greet, where the lines could be compared to those for Mickey Mouse at Disney’s Magic Kingdom.

Peloton’s instructors, packaged and presented to audiences as performers in a piece of glossy entertainment, have a unique relationship with the people in their community. They’re a beautiful, young, incredibly fit and charismatic group, and through tablet-size screens, they interact with the people they’re coaching on the bike almost everyday. From inside the homes of the Peloton commnunity, these instructors are inspiring people to change their lives—and that has a big impact on how their lives have moved into the spotlight.

We are FIT & FABULOUS! If you want to feel the power of the @onepeloton community clip in to today’s SWEATSTEADY Ride. ??? Vibes high. Outputs higher. And “whooooos” on ?! Claps if you felt that too! ????????

Jessica King, a former So You Think You Can Dance finalist, had never been on an exercise bike when she met with Peloton founder and CEO John Foley. She’s now been a coach with the company for over five years, has amassed over 70k followers on Instagram, launched her own wellness and life coaching program and changed more lives than she can count on two hands. Here’s what she has to say about fame, fitness and interacting with fans.

Did you expect fame to be a part of working with Peloton?

You know, even to this day I don’t think we look at it through the optics of “oh my god, we’re celebrities.” Our purpose is to impact the lives within our community by transforming them, elevating them, empowering them. We could have never predicted the power that our community now has. It’s overwhelming, beautiful and wonderful. We’re not driven by celebrity status, we’re driven by the idea that we’re making a difference in people’s lives.

Because you have changed lives, some people get very excited when they see you. What’s that like?

It’s always fun when people come into the studio because you can really see the physical response. They get shaky, they stumble over their words. For me, the most powerful thing actually comes through on Instagram. That’s where they’re telling me their intimate stories—whether it’s how something I said on a ride empowered them to ask for a raise, or they left a shitty relationship, or they’re hurting and they come to the bike for a moment of freedom from their hurt. It’s therapeutic, it’s cathartic and on top of just the natural impact of working out, you have the element of thousands of members taking part in the same shared experience. That’s what’s life-changing.

Are you ever surprised at how intimately people feel connected to you? Would you say the reactions you get are akin to how fans interact with actors or pop stars?

It is different in the sense that celebrities are untouchable and we are incredibly accessible. We’re not just some exciting thing they see in some movie or TV show, we are speaking directly to them in the form of shout outs, in the form of motivation that is specific to their needs or current experience. This has never been done before so there’s this moment of newness, realness and excitement—but also I would say a little caution.

When people run up to us with abandon, we need them to remember that we want to connect too. It’s important for us to always stay humble, because they put us up on a pedestal that we don’t necessarily want to be on. We want to come at it from a heart-centred place; human to human connection. So, it’s our responsibility to stay grounded and to speak [with fans] just like we do everybody else. We need to remember that we’re all just people here and we want to leave ourselves and the world a better place.