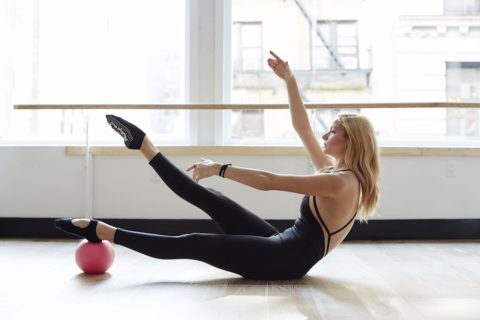 Unlike an indoor cycling class or an intense bootcamp session, an hour at the barre probably won’t leave you a sweaty, breathless mess. Instead, you’re more likely to feel the effects of the ballet-inspired workout’s micro-movements by way of DOMS (delayed onset muscle spasms) over the next few days.

This, however, is definitely not the case for Pop Physique Toronto’s latest offering: a ballet barre x HIIT (high intensity interval training) fusion class. “Our overall mission for this year is to bring more variety to the types of classes we offer,” says Jodi Watson, master instructor and owner of the trendy L.A. fitness studio’s Toronto outpost. (Pop counts Mindy Kaling, Kathryn Hahn and Brie Larson as clients.) “We want to give our regulars a next-level class.” And that’s where Pop Barre/HIIT comes in.

The one-hour workout incorporates a mix of upper body exercises and ballet-inspired HIIT movements, like plié jump squats, first position jump calf raises and curtsey lunges. “The biggest difference between this class and our traditional barre class is that you leave the floor,” Watson says. “In other words, we’ve added an impact element to the class.” There’s also the calorie burn: According to Watson, you can burn up to 150 to 200 more calories during Pop Barre/HIIT than the studio’s traditional barre class, which is said to burn up to 500.

According to Watson, you can burn up to 150 to 200 more calories during Pop Barre/HIIT than the studio’s traditional barre class, which is said to burn up to 500.

Of course, upon hearing all of this we had to test the class out to see if it lived up to its hype. That, and we really wanted to check out its Insta-bait digs; Pop is famous for its neon signs, cute and colourful aesthetic (hot pink pilates balls, pastel-coloured weights) and luxe bathroom amenities (in this case it was shower products from small-batch brand Nuori).

We dived right into the session with a dynamic warm-up, in which our instructor, Denise, got us to loosen up our arms and move our hips around. (Note: If you feel like a fool doing this then you’re probably doing it right!) This was followed by a series of traditional yoga poses on the mat, like downward dog, cat and cow. Next, upper body strengthening by way of planks, mountain climbers and push-ups, as well as pulsing with light—from 1 to 4 pound—weights.

After what felt like ages of pulsing and pushing through the slow burn, we went straight into the much-anticipated interval training, starting off with a variety of plyometric exercises: high knees, butt kicks, and plié jump squats. We eventually made our way over to the barre for some intense push-ups (pushing yourself up off of the barre) and lunges. Of course, that wasn’t all: To top it all off we then went into core- and butt-activating moves using our pilates balls, and finally, a much-needed stretch.

Prior to booking your class, you’ll notice the description includes a disclaimer at the end: “This is a high intensity workout and not for beginners!” it reads. “We recommend that you take some Pop Physique classes first,” Watson explains. Breathless and panting is not a mood I typically associate with barre, but clearly this class proved me wrong.

PHOTOGRAPHY COURTESY OF POP PHYSIQUE
Get the best of FASHION in your inbox Thanks for signing up!
The latest fashion, beauty and celeb news delivered right to your email #FASHIONforall Now, check your inbox to complete your subscription
We won’t ever use your email address for anything else
Want even more FASHION? Follow us on social media.