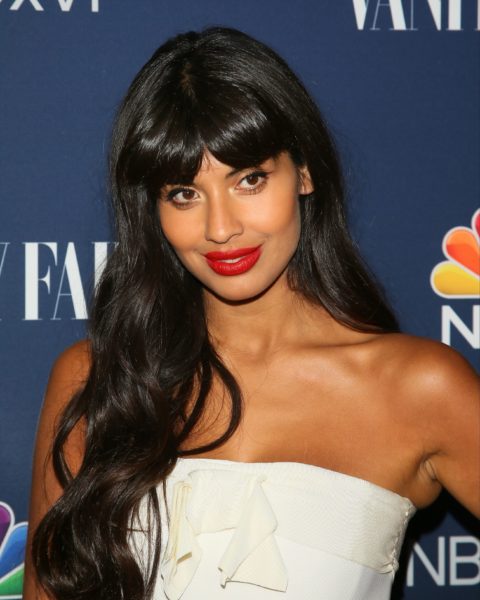 Jameela Jamil’s lissome form may be the subject of some of the best one-liners of The Good Place, delivered by the show’s lead Kristen Bell—“a big, beautiful, utterly perfect cartoon giraffe” and “a hot, rich fraud with legs for days” are some of my personal favourites—but physical perfection is far from being the defining trait of her richly layered, complex character, Tahani. Unfortunately though, it’s not rare to see women both on screen and off being judged solely based on their physical attributes, something Jamil herself has grappled with, and been vocal about, for years.

Now, “she’s on the war path” after stumbling across an Instagram post that estimated the weight of each of the women in the Kardashian-Jenner clan.

I’m on the war path. pic.twitter.com/A3zC6yTB6G

Appalled, the British actress took to her Stories in outrage. “This is how women are taught to value themselves. In kilograms. Grim,” she wrote, following it up with the pitch-perfect antidote: splashed across a full-length mirror selfie, she wrote up a list of all the things she weighs herself by—her relationship, her career, her friends, her activism—rather than kilograms or pounds.

Later, in a lengthy blog post on her personal website, she wrote: “I couldn’t believe what I was seeing. A group shot of grown women with their respective weights posted across each of their bodies, and the post asking what we think of their weights and then asking its followers, ‘What do you weigh?’ WHO CARES? What kind of crazed toxic nonsense is this? What is this post trying to achieve other than to induce anxiety into young women about something so entirely irrelevant? What are we teaching women about our value? Can it be measured using a metric system?”

She tweeted her Instagram posts out, calling on other women to send in their images of self-worth and the floodgates opened.

I’ve shown you mine, now show me what you think you weigh ?? https://t.co/TzcuhWdynt

After receiving hundreds of images from women around the world, she opened up a second Instagram account, called @i_weigh, where she could share the scores of inspiring images she was receiving, a place to celebrate women for all the accomplishments, achievements and characteristics that make them who they are, rather than the number they see on a weighing scale.

“There were too many to keep track of,” she wrote. “It happened so fast. The pictures were amazing. None of them were posed and filtered, nobody was contoured to within an inch of their life, or sucking anything in. It was women living their lives, writing down all of the things they were grateful for and proud of. All of the degrees they have, the babies they made, the cancer they beat or are fighting, their families they love, the disabilities they live with or help with, the relationships they have built, the companies they started.”

Jamil’s is an increasingly loud and insistent voice rising up to challenge the impossible standards of physical beauty perpetuated by the media and entertainment industry, where one’s worth–and employment—is intrinsically tied to their looks and their bodies. As someone who has dealt her entire life with issues of body image and even disability—a car accident at 17 left her confined to her bed with a damaged spine—Jamil knows a thing or two about how one’s worth can be misguidedly conflated with one’s looks. Before moving to Los Angeles, she worked as a radio host for the BBC, and gave a speech about her experience with body shaming at the Body Confidence Awards in London in 2014: “By some miracle, it came out that I had managed to gain 200,000 listeners, almost, on my show [the BBC Radio One Chart Show]. But on that same day, the papers decided to ignore the fact that happened and instead, ran a wonderful piece about the fact that I had gained not 200,000 listeners on my show, but instead two dress sizes. I realised in that moment with crystal clarity that my entire worth as a broadcaster, but more importantly as a woman, was being measured just with a weighing scale and it was so incredibly frustrating.”

But of course, actresses and entertainers aren’t the only women who face those kinds of unfair pressures, and we’re glad Jamil is encouraging us all to re-evaluate how we view ourselves. Head to @i_weigh to see some of the inspiring posts, and maybe even to send in one of your own.