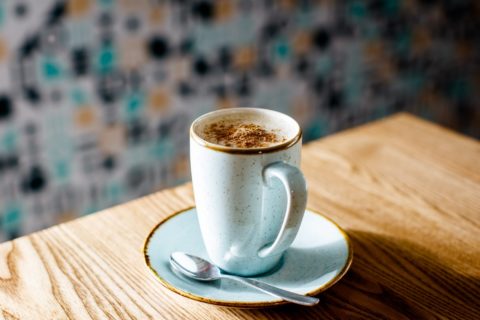 Chaga Mushrooms Are Popping Up Everywhere, But What Are They?

While the world continues to argue about whether or not celery juice is good for you, we’re taking a moment to acknowledge a very humble superfood that seems to be making its way into everything as of late: Chaga mushrooms.

You’ve probably spotted chaga on restaurant menus and in coffees and teas—and if you’re a health nut, chances are you’ve already tried it. But for the rest of the world, what exactly is it?

Chaga (Inonotus obliquus) is a fungus that grows on birch trees in China, Russia, Finland, the U.S. and  Canada. It’s rich in calcium, iron, magnesium, zinc, copper, sulphur, aluminum, to name a few, and is considered an adaptogen: A natural, non-toxic substance said to help the body adapt to stress. Use of these mushrooms can be traced back to 12th century Russia, where it was also recognized as a treatment for cancer by the Medical Academy of Science in Moscow in 1955.

However, it’s important to note that no human studies have been performed on chaga mushrooms by the Food and Drug Administration. As of right now, all reported benefits have been based on studies conducted on mice and personal testimonials from consumers, some of which state chaga reduces inflammation, boosts the immune system, decreases feelings of anxiety and helps lower blood sugar and cholesterol levels. In a 2016 Japanese study, chaga was reported to help suppress cancer in mice.

“Chaga is known for its anti-inflammatory, anti-viral and anti-bacterial abilities,” says Ruth Tal, founder of Fresh Restaurants in Toronto. Tal, an early adopter of the adaptogen, first introduced her slow-cooked cider three years ago, which is available on the restaurant’s menu. Other companies who have leveraged the benefits of this mushroom include Four Sigmatic, Rawcology (chaga granola, anyone?) and ELXR Juice Lab.

If you’re feeling adventurous you can try brewing your own chaga tea. It’s a process though, and one that Tal and other chaga adherents take seriously. “Chaga must be brewed at a low temperature for a long period of time,” she says. “Our cider is brewed for 7 hours.” Anything for health though, right?

PHOTOGRAPHY BY Joel Clifton
Get the best of FASHION in your inbox Thanks for signing up!
The latest fashion, beauty and celeb news delivered right to your email #FASHIONforall Now, check your inbox to complete your subscription
We won’t ever use your email address for anything else
Want even more FASHION? Follow us on social media.