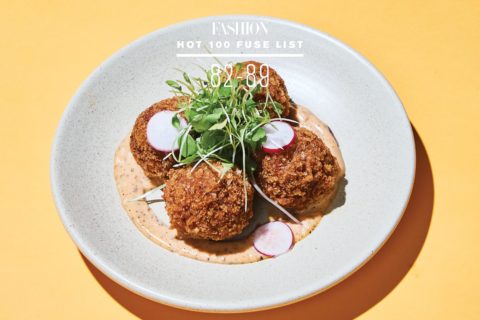 Photography by Suech and Beck
Wellness

The Top Food Trends Right Now: Everything You’ll Be Eating and Where to Get It This Year

In our Winter issue, FASHION editors rounded up the 100 people, products and experiences we think will blow up in 2019. It’s our inaugural Hot 100 Fuse List. From the workouts you’ll be doing, to the new designers and artists you’ll see on your feed, this is your guide to being in the know this year.

Look at your bowl of cereal. Now, look around to see what the rest of the world is eating. Regional cuisines are putting your meals to shame. This year, take your meal-time inspiration from the global stage like these top chefs and eateries. Here are all the top food trends and who’s serving them up in 2019.

After moving to Canada from Japan in 2013, Haruna Makino studied culinary management at George Brown College and, while still a student, began working as a chef and food stylist. At 30, she’s already the executive chef of Grasshopper Restaurants, a plant-based restaurant group with two locations in Toronto. At Grasshopper, Makino marries her love of plant-based cooking with her Japanese heritage. She creates menu hits like her famous Haru Salad, which features shredded daikon and crispy gobo ribbons on a fresh bed of mixed greens. –Claudia McNeilly

? L'ora d'oro ~ late summer at the #osteria. {The menu for the evening ahead is finalized & made viewable on our website by 4pm daily.}

Known for her Italian cooking at Vancouver’s chronically busy Savio Volpe, Melanie Witt left university to attend culinary school and hasn’t looked back. She also helped with Elementa, a pop-up dinner series designed to promote local agriculture in British Columbia. Her encyclopedic knowledge of sustainable ingredients is matched only by her drive to champion other female chefs. –Claudia McNeilly

It’s been a great year for Daniel Hadida, who opened The Restaurant at Pearl Morissette with his co-chef, Eric Robertson, in 2017. Hadida, who previously worked at Le Chateaubriand and Septime in Paris, is heavily influenced by the world’s most boundary-pushing cooking. His consistently brilliant menu is based on ingredients that are either grown in the garden or locally sourced. –Claudia McNeilly

the countdown to the countdown is on. for new year’s eve, chef @pnmejia and the team are doing an early and late four-course, family-style tasting menu with deviled eggs and northern divine caviar, newfoundland snow crab, flatbreads and foie, and of course steak straight from the fire. visit our link in bio for reservations.

At just 25 years old, Dylan Watson-Brawn has already proven that he is among Canada’s most promising young culinary talents. Growing up in Vancouver, Watson-Brawn dropped out of high school at age 16 to pursue an opportunity at the legendary three-Michelin-star fine-dining institution RyuGin in Tokyo. In 2012, he permanently relocated to Berlin, holding a series of ticketed intimate dinners in his apartment before opening his restaurant, Ernst. Watson-Brawn’s flawless regional tasting menus have established Ernst as one of Europe’s most innovative new restaurants and the only place harder to get into than Berlin’s exclusive nightclub Berghain. –Claudia McNeilly

Pulled Pork Bao Benny, a Teppan Keema Curry set and six different kinds of ramen are just a few of the brunch dishes available on weekends at this contemporary Japanese restaurant. –Meghan McKenna

Expect to stand in line at this East End Egyptian eatery: It only seats 24. But patient brunchgoers will tell you that the Sunny Eggs and Foole, Charred Balady and Honey-Cardamom Latte are well worth it. –Meghan McKenna

We're just as excited for the holidays as you are ☺️ If you're looking for a holiday feast this weekend, then we've got you covered, just give us a call and reserve your table ☎️ #JuniorMafiaMTL #JuniorFilipino

This Griffintown Filipino restaurant has a special name for its weekend brunch: RICE+SHINE. The star of the menu is the Cornsilog, a shortened term for corned beef, garlic fried rice and fried egg. –Meghan McKenna

Photography by Suech and Beck
Get the best of FASHION in your inbox Thanks for signing up!
The latest fashion, beauty and celeb news delivered right to your email #FASHIONforall Now, check your inbox to complete your subscription
We won’t ever use your email address for anything else
Want even more FASHION? Follow us on social media.