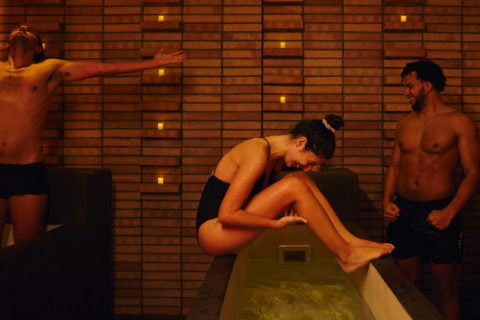 I Took the Plunge and Tried Cold Water Therapy. Here’s What Happened

Cold plunges and ice baths are having a moment. But does this hot trend deliver real health benefits?

“Our aim is to deliver peak experiences of awe and connection, and your experience is super-boosted to the moon — to the moon!”

I’m sitting in a dimly lit lounge surrounded by half-naked 30-somethings, each of us listening with rapt attention as Othership co-founder Harrison Taylor gets pumped about the experience before us. There are about 25 people here on a Friday night for the club’s hot-cold session, and by show of hands, I’m the only one who’s yet to take the plunge.

“Put the hot and cold together and the contrast between the two is way more than the sum of its parts,” Harrison continues. “We are doing deep work here together. We are transforming ourselves, physiologically, down to the cellular level.”

Othership, which offers both guided and self-guided sauna/ice bath sessions, was designed to be an alternative to hitting the bar with your friends. Taylor and co-founder Amanda Laine trained in Holland to become sauna masters, learning everything from how to build a sauna to towel-waving dance techniques that move the hot air. Laine is also a Canadian model who you may recognize from the runway circuit. As a child, she would take wintertime dips in the lake near her family’s Ontario home, and it was that tradition that led her to launch Othership in Toronto this past February with additional co-founders Robert Bent, Myles Farmer and Emily Bent.

But the credit for cold therapy’s come-up goes to Wim Hof, an extreme athlete from the Netherlands who developed the Wim Hof Method — a combination of cold water therapy, breathing exercises and meditation. Hof, aka “The Iceman,” professes a bounty of health benefits from following his practice, from a boosted immune system to improved mental health.

Casie Stewart, a marketing director based in Toronto, has been part of a Wim Hof Method Facebook group for a couple of years. In the winter, she takes a chainsaw to the frozen lake near her Ontario cottage to put his methods to the test. And more recently, Stewart purchased a stock tank for her downtown rooftop, where she plunges for up to 30 seconds or three minutes at a time. “Ice baths give me more energy, mental clarity and mental strength. It’s a hard thing you can push yourself to do, and it makes other things not feel so hard,” she says.

Besides Hof, the pandemic is another reason for the cold plunge’s popularity. “I think people probably struggled mentally more than they ever had through the pandemic and sought out tools to help manage their struggle and stress,” says Nick McNaught, the founder of Unbounded, which offers guided cold plunges in Toronto and cold camps at The Trace at Oak Lake in Havelock, Ontario.

“The world right now is catching up on how beneficial this is.”

Exactly how beneficial is cold water therapy, though? Hof has come under fire for overstating the practice’s health benefits, and in chatting with Laine, she tells me about seemingly too-good-to-be-true pros such as the 300 per cent surge of norepinephrine and endorphins and thermogenesis (meaning, the cold plunge triggers your body to burn brown fat to heat itself).

Although the laundry list of purported health benefits is longer than Britney’s conservatorship, the science isn’t there…at least not yet. “Research hasn’t been done on whether a sudden, quick cold stimulus offers long-term health benefits of any kind,” says Stephen Cheung, professor of kinesiology at Brock University. As for the claim of helping reduce inflammation, if you’re an athlete, you’re sitting in an ice bath for a good 15 minutes to reduce blood flow and swelling, he says. “So I would argue that quick cold plunges are too short to have any meaningful, long-term health effect.” The same goes for the thermogenesis claim.

“But if it makes you happy to start your day off with an adrenaline rush, there’s nothing wrong with it,” Cheung adds (unless you have a cardiovascular condition or are very sedentary). ”Just don’t expect it to be this magic bullet that’ll improve your immune system, reduce inflammation and have you burning fat through the day.”

Equal parts skepticism and fear consumed me for days before my Othership session. To keep calm in the intense heat of the sauna, I took slow, deep breaths, and both the icy towel Harrison handed out and the sips of cool water from my huge Nalgene bottle were lifelines. Between his encouragement to pause and think about what went well in our day to his dramatic towel dancing, you’re not wrong to think it’s all a little woo-woo — but it was also entirely enchanting.

After the dry heat of the sauna, I was itching to feel cold water on my skin. When my turn came to get into the ice bath, I immersed myself quickly before I could change my mind, and immediately my feet felt like they were wincing. I focused on withstanding the persistent twinge in my extremities. But with Laine’s soothing guidance, the encouragement of my ice-bath partner, and my stubborn Capricorn nature, 120 seconds ticked by quickly and I emerged exhilarated and triumphant.

After the intense endorphin rush, I slept like a baby. And this once reluctant ice bather now has not one but two dips in Lake Ontario on my calendar. Cold water therapy might not be a cure-all, but my icy trip to the moon is one journey I’d take again.