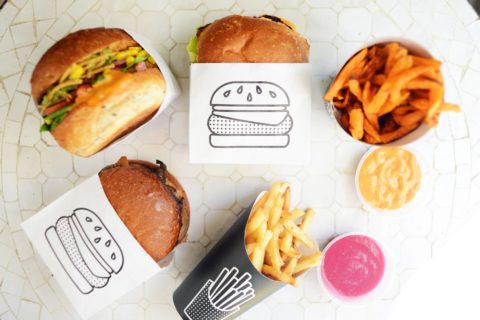 The plant-based restaurant just opened its doors in Yorkdale Mall.

Since opening in New York’s West Village in 2015, all-day vegan restaurant By CHLOE has expanded to Boston, Los Angeles, Providence and London. Now, the Insta-famous chain (it has 145K followers on the platform) has landed in Toronto, opening its first location at Yorkdale Mall last week.

“A lot of people kept requesting us to come to Canada on social media,” says By CHLOE’s co-founder Samantha Wasser. “Our team took note of it and as we were looking into our follower base and keeping an eye on the massively growing vegan scene in Toronto, it just felt like the right time.”

The Yorkdale space has been designed to resemble the brand’s very first location in New York and carries many of the signature items that made it famous, from the Guac Burger to the Quinoa Taco Salad to the Chlostess Cupcakes (their riff on the Hostess snack cake). The Toronto menu will also include a Maple Bacon Cheeze Burger, Poutine, and Split Pea Soup. Ahead of the restaurant’s opening, we caught up with Wasser to find out more about their 16th location, how plant-based food has evolved, and more.

Tell us about the Yorkdale restaurant.

I always try and get natural light in our spaces and really transform a space to make it feel like a unique experience and feel very on brand for us. In this case I gave up natural light in order to recreate our flagship location. It’s in a mall so they’re very encouraging of brands taking over the space and making it their own, so we were able to create something special on our facade that transports you directly onto the corner of Bleecker and MacDougal street [their inaugural West Village location]. I’m very excited for people to walk by and sort of feel like they’re in New York.

Will the menu be tweaked or tailored in any way to suit the ingredients or produce you’re getting here or will it largely follow the same format?

We always try and have our core menu available at all of our locations. I think early on we realized that we’d probably get crazy hate mail if we didn’t have our Guac Burger available everywhere (laughs). So we’ll definitely have our tried-and-true dishes that people have embraced in their daily life. But when we go into new locations we try to have some fun and unique dishes that are only available at those stores. That allows us to be more creative and do something that is a nod to the city that we’re in. And it also allows for our local customers to feel that they have something that everyone else doesn’t have.

We never make any claims about whether our food is healthier, or how healthy it is versus something else. But we really try to be super mindful about creating foods that are made from whole ingredients. So by default it can be better for you than other things that are out there in the fast food world. And so we’ve really tried to stay true to that belief throughout our growth and stayed away from some of the popular fancy ‘alternatives’ that are sort of exploding right now. But at By CHLOE we’ve always tried to create unique dishes that are made from the same ingredients you might encounter in a salad that you’re having. Our burger patties are made with sweet potato and quinoa and black beans, something your body can identify and digest. You can even look at the patties and sort of see what you’re getting versus some of these other items that exist right now that you’re kind of unsure of. So that has kind of been our guiding light or food philosophy—taking from our earth and what’s around us and presenting it in unique and interesting ways.

It’s so interesting, we’ve seen the customer change and grow since we opened because four years ago the term plant-based almost didn’t even exist. It was still “vegan” and it was a little less approachable than it is now. So in the beginning, we did have a lot of people that may be classified as vegan. But through the branding and the way we positioned ourselves, we were able to speak to our customers in a way that was inviting and approachable and the total opposite of some of the vegan restaurants that existed at the time. Our intention was to create a brand with delicious food that just so happens to be vegan. And we saw early on that people were coming in because they really enjoyed the food, whether or not they even knew it was vegan or plant-based. Maybe it’s because people have become more mindful of what they’re putting in their body or they just want some variety or their significant other dragged them in one day or we opened up near their office and they actually really enjoyed it. As the brand grows we’re seeing more people that maybe were hesitant in the beginning sort of take that leap of faith with us and quickly become recurring guests.

One thing that’s so interesting about By CHLOE’s brand identity is how it’s so Instagrammable. Was that a key part of the ideation process when you were going into it, how it would look online?

It was definitely important to me from the beginning. I remember I had tested every single item in our menu to make sure that it not only travelled perfectly, but also photographed well. With the burger, we trained the staff to make sure that it sits up on the tray in burger bags when it’s handed to the customer to make sure that that overhead shot was going to be all of the beautiful ingredients that you would find in the burger. We also did a lot of work on our salads. A lot of people wanted us to toss the salads because it maybe made for an easier experience but I was like no it’s so much prettier when you can see what you’re about to eat and you can see the textures and colours, it’s more of a ‘woah’ moment. We eat with our eyes so that’s definitely been a big part of [our approach].

And in terms of the Instagram aesthetic, how was that figured out? Because it is very millennial—there’s lots of great colours, and a fun and whimsical element to it. Was that playfulness a key part of the brand’s identity from the very beginning?

When we launched, there were a lot of brands at the time that were super serious. In order to counteract that seriousness, we went for playful and we leaned in to fun and playfulness and not taking ourselves too seriously. I think that we’re one of few brands out there that can maybe get away with having these kitschy sayings on our menu and have it feel organic to our DNA and not come off as cheesy. And if it does, it’s because we want it to. I think that if I’m able to put a smile on someone’s face because they read on our dining trays, ‘if you were a veggie, you’d be a cute-cumber’, then I’ve done my job. And it kind of does set us apart. I think that food has gotten really serious over time and people are becoming more serious about what they’re putting in their bodies and we sometimes tend to overthink food too much. And so what better way to invite people in than to be like, ‘you don’t have to overthink this meal.’ This is going to be a really bright and fun experience and you’ll walk out of here with a smile on your face.

Image courtesy ByChloe.
Get the best of FASHION in your inbox Thanks for signing up!
The latest fashion, beauty and celeb news delivered right to your email #FASHIONforall Now, check your inbox to complete your subscription
We won’t ever use your email address for anything else
Want even more FASHION? Follow us on social media.