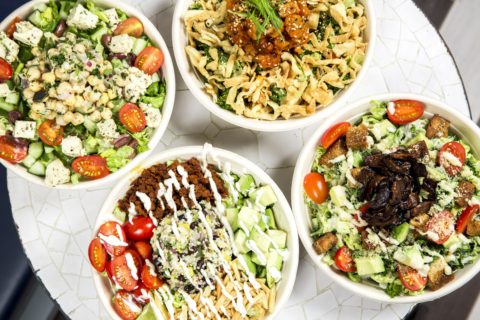 The Best Vegan Restaurants in Canada

The plant-based restaurants to visit when you're looking for a meal that's light on the body and on the planet.

From Toronto to Montreal to Vancouver to Halifax, we rounded up some of the best plant-based restaurants in the country for you to visit on World Vegan Day and beyond.

ByCHLOE
New York’s famous fast casual vegan restaurant ByCHLOE is now open in Toronto. Modelled after the chain’s flagship restaurant in NYC’s West Village, the Yorkdale location pays homage to its inaugural space as well as its signature menu, with items like their Guac Burger, Quinoa Taco Salad and Chlostess Cupcakes. The Toronto menu also includes a Maple Bacon Cheeze Burger, Poutine and Split Pea Soup. Word on the street is they’re already looking for their second location, in the financial district.

KIM JACK THROWBACK ??⁣ ⁣ Making a comeback for ONE WEEK ONLY, our Kim Jack pizza will be available this Thursday Oct. 31 to Wednesday Nov 6th at all locations. An OG pie, the Kim Jack launched when we first opened our doors in 2016 and was an instant fav.⁣ ⁣ KIM JACK ?: Hoisin Crema, Cashew Mozzarella, Kimchi, Gochujang Braised Jackfruit, Roast Broccolini, Scallion

Heirloom Vegetarian
Located in a beautiful heritage building in Vancouver, Heirloom offers a large selection of vegetarian dishes like artichoke tacos, cauliflower steak and cashew coconut curry. Everything on the menu can be made vegan and gluten free, and all the products used are sourced locally. Aside from the flagship location in South Granville, there’s also a juice bar and a fast casual spot by the same owners.

The Acorn
Named the best vegan eatery in the world by Big Seven, a travel publication, Vancouver’s The Acorn has also made it to the pages of Bon Appetit, which encourages readers to “take advantage of the restaurant’s forest-centric cooking (you’re unlikely to find candied lichen elsewhere) and its truly British Columbian ingredients, like blushy salmonberries and Haida Gwaii kelp.”

La Panthere Vert
This 100% vegan restaurant with six locations in Montreal is known for its falafel sandwiches, rice and lentil bowls, vegan poutine, and wide array of plant-based desserts.

En Vie
This all-day “vegan kitchen” in Halifax offers items like panko-crusted king oyster mushroom “wings, chili “cheeze” fries (all the vegan cheeses are made in-house), and a burger with a house-made seitan patty.

Pure Kitchen
Located in Ottawa, this “scratch kitchen” makes all its items fresh in-house using whole ingredients. The menu offers both cold and hot bowls with toppings like maple tamari tempeh steaks and coconut bacon, and sandwiches and burgers with fillings like lemon lentils, fried cauliflower and a double mushroom walnut patty.

Some days you just want a burger. We get it. Our chefs have created this Backyard BBQ burger as our weekly feature – available at all locations until Sunday! We take our original mushroom walnut burger patty and stack it with our house BBQ sauce | crispy onions | pickled jalapeños | iceberg lettuce | homemade vegan mayo | coconut bacon | your choice of cashew or cheddar cheese | served on @natsbreadco bun (or ask for our @odoughs gluten free option.)! Comes with your choice of side – featured here with the half greens & fries option. Our mixed greens has changed recently – now made with a lemon & @alska_farm maple vinaigrette, greens (some from @juniper_farm !), sesame & pumpkin seed blend, crunchy sprout medley from @backyardedibles & sliced red onion. One of these ingredients not your thing? It’s always easy to omit an ingredient – simply inquire! What burger toppings would you love to see featured this winter? Inspire us below! ✨???? #vegburgers #purekitchenottawa

Image courtesy ByChloe.
Get the best of FASHION in your inbox Thanks for signing up!
The latest fashion, beauty and celeb news delivered right to your email #FASHIONforall Now, check your inbox to complete your subscription
We won’t ever use your email address for anything else
Want even more FASHION? Follow us on social media.