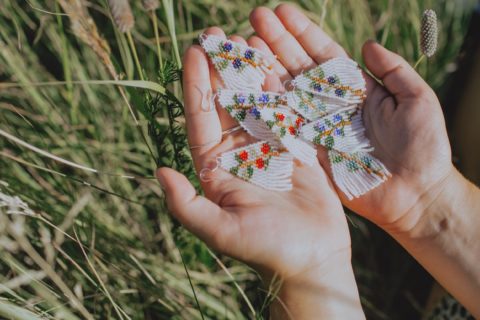 The beadwork artist launches a fresh batch of earrings at 8pm EST.

“My interest in beadwork came from looking at my family beadwork, my background and my identity,” says Bronwyn Butterfield, the Métis-identifying artist whose jewellery features natural and geometric motifs mainly rendered in glass beads.

Her whimsical pieces take upwards of four hours to make, and a new selection of earrings will be available for sale tonight at 8pm EST; don’t sleep on these items because they are limited. “I think in the past few months, I was giving myself lines to work within,” she says, adding that her new collection represents a more open and experimental vein of creativity featuring new and archival subjects. “I [used] August to try new things, and not give myself any barriers.”

The scope of Butterfield’s work is unsurprising when you consider her background in Human Geography, where she focused on researching “colonial constructs of nature” and how it’s related to the notion of reclamation. “I learned a lot about my surroundings in Winnipeg–the built and also the natural,” she says. “In the same way that I was doing research at university and talking about these hard topics, I find it’s similar with beading. My goal is [to] bring an Indigenous presence into spaces that they don’t find themselves in.”

here’s all the pairs that will be up on monday!! my biggest online sale yet, a lot of work but I wanted to make sure I had a good mix ? I had a lot of moments this month where I felt like I fell in love with beading again for the first time, reminding me why I do this… Lots of emotions in these pieces ??

In 2018, Butterfield began to learn more about the legacy of beadwork within the Métis and Cree sides of her ancestry (she is also of Ukrainian descent). “In many cases in Manitoba, [a lot] of Indigenous people moved from up north,” she says. “They weren’t super-involved in their culture.” She’s been influenced by photographs of family members in “really big beaded leather jackets,” adding that, “My healing path has been to try to learn about the beadwork in my family…. This is my duty, to bring [it] back. I can’t live the rest of my life not sharing my culture, and not practicing what my family used to practice. Growing into your identity is really hard when it’s something that’s been removed along the way. That’s something I navigate–a world when you’re surrounded by your culture in a way, but you don’t feel part of it.”

She says she was particularly motivated to start beading by a story that her father told her about a pair of beaded gauntlets of his that were lost in a fire. “I thought, I should make him some gauntlets to replace the old ones,” she recalls. “That was my inspiration.”

Butterfield began posting images of her creations on social media, more from a “look what I made” perspective than to start a business. “It was never meant to go in the direction it is in now,” she notes. “It’s really exciting because I get to do what I love. Social media has helped move it along, and given me the chance to do it full-time.”

While her brand has been able to thrive thanks to its online presence and the fact that people are doing so much virtual shopping right now, Butterfield notes that the COVID-19 crisis has thwarted another aspect to her practice. “[One] of the most important parts of beadwork is the community aspect,” she says. “When the pandemic hit, I wasn’t able to go to beading groups. I was like, what am I going to do? I went once or twice a week.”

this weeks projects ☀️ an unfinished transport box for beads, and one vamp done for a pair of mukluks. pattern is from my cápán Sarah Mcleod

During this difficult time, she’s been bolstered by ongoing support from her customers. “I was biking behind someone the other day who was wearing my earrings. It was so weird,” she says with a laugh, noting that in the spring she found herself wondering, “Who’s going to buy beadwork during a pandemic? [But] it was almost like an inverse effect. There’s been a push to support local artists who would be struggling during this time.”

Butterfield says she’s used recent months to consider other ways to approach her beading, like how to make her designs more inclusive. “[I’ve been] thinking of ways I can diversify from earrings,” she says. “I want everyone to wear my work.” And she adds that her newest pieces reflect how she has moved forth as a creative this year, presenting a poignant message for us all to consider. “It sounds cliché, but I had to sit on the idea and let it grow,” she says of her flower-focused patterns. “I’ve experienced a lot of personal growth, [and] I like to think they grew along with me.”