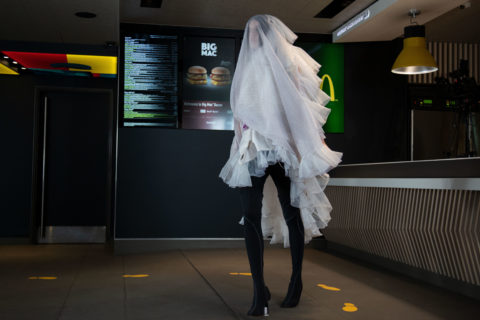 Vetements Was Once a Darling of the Fashion World. Are the Tides Turning?

The label’s most recent collection, presented in a Parisian McDonalds, was far less well-received than previous collections.

Since its inception in 2014, French fashion label Vetements has been routinely drawing ire for what appear to be an elaborate set of jokes.

First they received global attention for purveying a t-shirt with the logo of logistics company DHL for $330. Following collections replicated stereotypes of goths and Heaven’s Gate cult members. The brand’s most recent collection was a sober articulation of the uniforms of capitalism, from security guards to police officers to corporate middle managers, and took place inside a McDonalds on Paris’ Champs-Élysées.

To distill Vetements essence into a single aesthetic would be impossible, but the closest might be “capitalist kitch.” Designer Demna Gvasalia draws inspiration from European underground party culture and repackages it into highly covetable, slightly askew versions of familiar things. Almost every single runway show has included some variation of a hoodie puffed up to thrice its normal size and waist-high boots that flop down the leg like flaccid penises. Vetements takes classic garments and inflates them to comical proportions – a rose-splotched Western jacket juts out at the shoulders like David Byrne’s big suit, a leather jacket that might look bespoke if worn by André the Giant rather than a willowy model. Vetements’ intentional ugliness seems to have sprouted from the decomposing corpse of normcore, building on its blithely unassuming aesthetic with the addition of blatantly confrontational elements.

Vetements’ intentional ugliness seems to have sprouted from the decomposing corpse of normcore, building on its blithely unassuming aesthetic with the addition of blatantly confrontational elements.

Inside the fashion press Vetements tends to be well-received, consistently receiving breathless reviews such as claims that the label is “hacking the fashion system.” Yet the label’s singular brand of sneering irreverence routinely draws ire from people whose purviews remain firmly outside the style section. Writing for the Toronto Star, columnist Vinay Menon described a pair of jeans that unzip to reveal a sliver of derriere as an “apocalyptic garment,” intuiting that the designers of said jeans must be “professional freaks.”

In a world where the Costume Institute is now one of the more popular reasons to visit the Metropolitan Museum of Art, Vetements reifies the distinction between the fashion industry’s true insiders and outsiders. Previously, its untranslatable language of ugliness arguably represented a bid for fashion to once again claim elitist space where it has eroded away, and shoo off anyone who isn’t sophisticated enough to understand. And while Vetements has been largely successful despite—or perhaps because of—its desire to upend and poke fun at the conventions of fashion, it appears as though critical consensus is beginning to shift in the opposite direction.

When it is finally revealed that Vetements was actually a long-form performance art piece intended to scam the fashion industry this whole time I'm going to feel so vindicated https://t.co/8AcxGJYLxV

vetements must be stopped at all costs pic.twitter.com/75L5AftVLG

Vetements’ most recent collection, men’s spring/summer ’20, contained the same inflated proportions and references to blue collar culture that characterized previous collections. Full-on corpse paint was juxtaposed with sporty nylon anoraks. Tracksuits appropriated the logo of the World Economic Forum, rejigging it to read “Global Mind Fuck.” The signature look in the collection was an oversize middle-manager shirt and tie with a nametag ‘Hello, I’m Capitalism” paired with work-inappropriate flip flops and a red baseball hat that read ‘For Rent.’ A replica of a T-shirt worn by journalists during the Israeli invasion of Lebanon in 1982 was accused by Vogue Arabia of “instigating regional upset.”

While previous Vetements bootlegs – the aforementioned DHL shirt and a $2,145 dupe of a canvas IKEA bag — were suffused with a sufficient sense of humour, this collection struck a deeply pessimistic tone. The message was bleaker than ever before. Police officers in riot gear glued to their phones, middle managers wearing flip flops and flannel pyjama bottoms broadcast an overarching sense of desperation. Political and environmental instability have forced the world into such a state of vulnerability that yes, anything can be fashion but none of it is fun anymore. We are forever trapped running the hamster wheel of late capitalism; fugitives in a world of our own making.

Political and environmental instability have forced the world into such a state of vulnerability that yes, anything can be fashion but none of it is fun anymore.

It’s tempting to write off Vetements as an elaborate scam run by two ferociously good-looking Georgian trolls (Demna’s brother Guram runs the business side of things), but their clever replicas of ‘90s-era Reebok jackets and security guard uniforms are arguably more akin to Richard Prince’s appropriation art than a counterfeit bag bought on Canal Street. In 1975, Prince gained currency in the art world for re-photographing existing photographs and passing the work off as his own. Like Prince, Vetements’ willingness to charge obscene amounts of money for a blatant facsimile contains an element of conscious goading.

One could argue that Vetements is the sartorial equivalent of Donald Trump refusing to pay his taxes because he’s “smart”; just because it’s self-aware doesn’t make it less of a racket. But Vetements consistently positions itself as outside the fashion system while remaining complicit with it. Sure, anyone who is willing to shell out $2000 for a ski jacket may be getting duped. But Vetements seems to acknowledge that they’re dupes for making the objects in the first place.

Gvasalia is unquestionably a deeply talented designer, but his vision is sometimes clouded and overwhelmed by his desire to shock his audience. We don’t live in that kind of world anymore. Shock value may have served its purpose — to force people to entertain perspectives different than their own — during the relatively comfortable 1980s and 1990s. But as despondency has replaced complacency as the cresting cultural zeitgeist, a more sensitive approach is required.

What we need right now is clothing that doesn’t sneer at the world, but hints at ways of making it better. We need a blueprint for how to hope, a natural human resource that currently exists in extremely short supply.

Photo by CAROLINE BLUMBERG/EPA-EFE/Shutterstock
Get the best of FASHION in your inbox Thanks for signing up!
The latest fashion, beauty and celeb news delivered right to your email #FASHIONforall Now, check your inbox to complete your subscription
We won’t ever use your email address for anything else
Want even more FASHION? Follow us on social media.