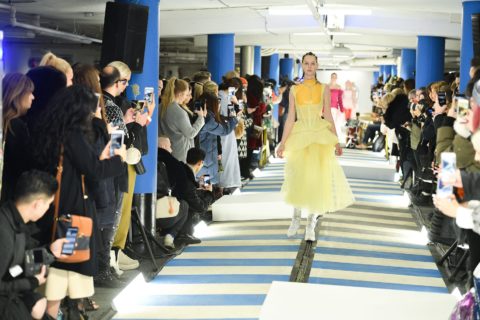 Is it really that time of year again? Toronto Fashion Week has once again returned to inject the city with a dose of much-needed glamour. For a precious few days each year, all eyes in the city are firmly planted on the fashion industry, which frankly doesn’t happen enough. Yet just thinking about the week makes me tired; It’s preemptive exhaustion at the mere thought of the late nights and nonstop hobnobbing to come – but luckily there’s a whole cream of fresh talent that makes it worthwhile.

Day one kicked off with a throwback to Old Hollywood thanks to the double-bill showing of ZOFF/Alan Anderson at the Hazelton Hotel. (The hotel’s event room was transformed into a flowery showcase where everyone sat front row.) Designer Michael Zoffranieri, who graduated from Ryerson University’s fashion design program in 2016, teamed up with seasoned bauble make Alan Anderson to present a collection that was wholly considered in its commitment to glamour. Models of all shapes and sizes (a phrase that I frankly shudder to type, but until diversity on the runways becomes industry standard, it still bears mentioning) paraded down the runway in sparkly, gala-ready gowns complemented by Anderson’s chandelier necklaces and doorknocker earrings. A particularly spirited older model, Judith Maria Bradley twirled down the runway in a silky green cape bedecked with  a pirouetting princess. The sensibilities of the two designers fused to produce a highly-effective, knockout collection. “I think we’re ready to bring more magic to Toronto,” said Zoffranieri in an interview backstage. “And less black!,” Anderson added. “You go to every function in this city and no one wears colour! It’s like, you know what? Be an individual, stand out!”

After a significant break in the schedule, Wuxly Movement, an upstart parka brand created by former CFL football James Yarichuk after he couldn’t find a down-free park enough warm enough for his Brazilian girlfriend to wear, delivered a hilarious and good-natured spectacle. Professional figure skaters, including 2018 Olympic gold medalist Gabby Dale, engaged in an icy showdown clad in the brand’s boxy parkas in a competition that was judged in part by FASHION’s editor-in-chief, Noreen Flanagan. “They said ‘put on a static presentation.’ I don’t do static. I’m an athlete, I’m always moving,” Yarichuk said of his decision to upend up the fashion show format.

Stalwart designer David Dixon’s show was held in the Arcadian Court of the Royal Ontario Museum, a standout venue that felt a bit like attending a show in Canada’s version of the Grand Palais. Dixon has begun to use his label as a platform charitable cause célèbres in recent years, and this season he chose to shine a light on osteoporosis. (“Fashion is a good conduit to communicating ideas to an audience,” Dixon said in a brief video that preceded the show.) By incorporating none other than bubble wrap, a “universal symbol of protection,” he was able to produce an unexpectedly elegant, haunting collection. The standout piece of the collection was a white dress artfully slashed at the back to resemble the bones of a ribcage. 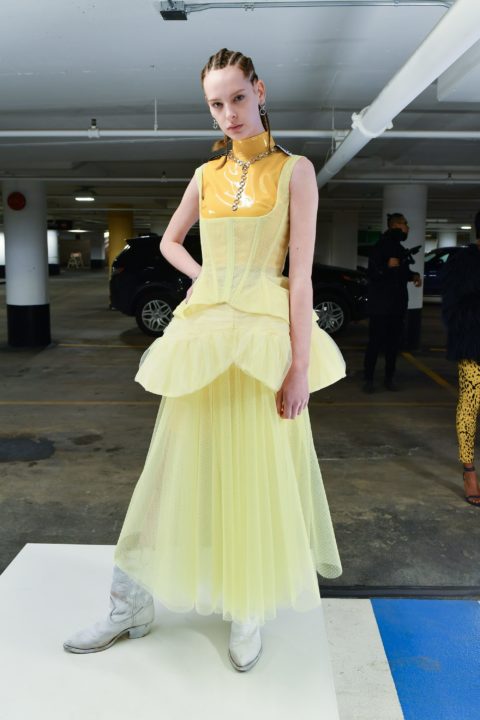 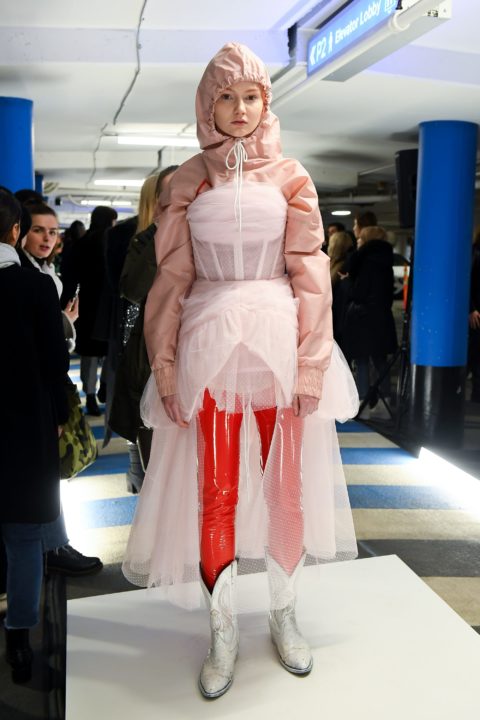 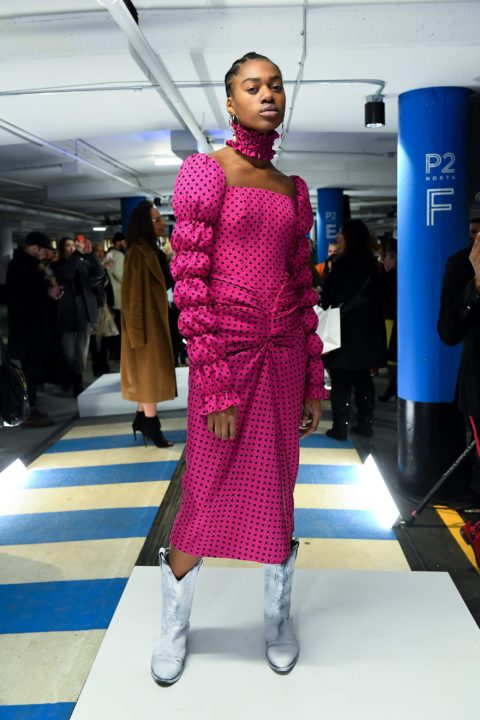 The final show of the evening, Mikhael Kale took place in what my friend quipped was “every woman’s dream” – an underground parking lot at 10pm at night. Despite the sketchy environs the show was a blast. Kale’s singular vision is always a treat and this season he delivered streetwear cowbows with a Victorian twist – a combination that sounds bizarre but somehow worked. Latex turtlenecks were styled underneath boned corsets paired with cowboy boots. (Though I certainly had…questions about the designer’s decision to bedeck white models in cornrowed hairdos.)

Now it’s time to gear up for day two.

Photography Courtesy of George Pimentel
Get the best of FASHION in your inbox Thanks for signing up!
You’ll get the latest fashion, beauty and celeb news delivered right to your email Now, check your inbox to complete your subscription
We won’t ever use your email address for anything else
Want even more FASHION? Follow us on social media.