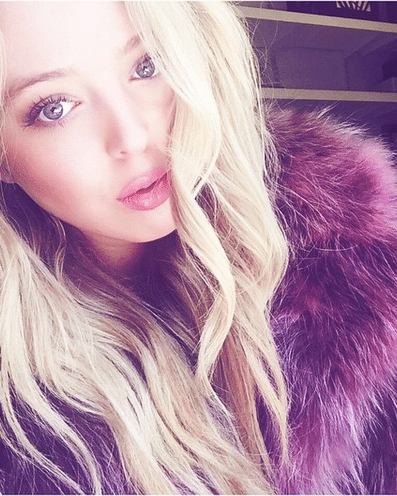 A boutique in The Hamptons has the answer.

Is Tiffany Trump following in her big sister Ivanka’s footsteps with a jewellery collection?

Since graduating from college in 2016, the youngest Trump hasn’t been sitting around the White House binge watching House of Cards.

The 23-year-old daughter of President Trump and Marla Maples (his second ex-wife fyi) has been grabbing a few headlines of her own before starting law school at Georgetown University this fall. She’s sat front row at New York fashion week (who can forget the much buzzed about seat snub captured on Instagram?), hosted charity luncheons, scuba dived in exotic locales and hung out with her half siblings Donald Jr., Ivanka and Eric. And this summer, she’s hitting The Hamptons—and making jewellery?

Recently, Trump, who is said to be named after luxury brand Tiffany & Co., debuted two handmade pieces of jewellery in an Instagram video from East Hampton It boutique Blue & Cream. Wearing two layered necklaces, featuring an iridescent boxing glove charm on one chain and a purple lightning bolt on the other, Trump is seen in the short clip smiling and laughing as high-end retail store owner Jeff Goldstein asks her if the pieces are custom. She says “yes.” Forget friendship bracelets, in Trump’s world summer hobbies involve gems.

@tiffanytrump stopped by to share some of her custom pieces strictly for #friendsandfamily but whats up @adwarren !!? We neeeeed pink #justdrew sweatpants!

Despite filing her cheeky charms under pastime, the Internet continues to ask: is Blue & Cream actually going to sell them? A store representative tells Vanity Fair no: “We are not selling the line in our store, but as a longtime customer she was excited to show off the pieces to Jeff Goldstein, the store owner,” says Jonah Redel-Traub. “Our Instagram tries to capture the culture of East Hampton and she’s definitely a person of interest right now.”

Given her father’s recent controversial tweet featuring a doctored video of him wrestling CNN to the ground, it seems her boxing glove charm is timely if nothing else.