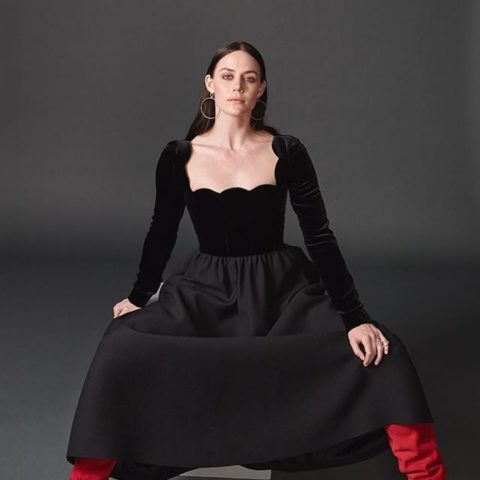 Tessa Virtue just shared new images of her Vogue Japan photoshoot, calling the experience a “dream come true”. That phrase could be said for many events in Virtue’s life. The 29-year-old athlete has collaborated with brands like Bon Look and Hillberg & Berk, appeared on The Ellen DeGeneres Show and, of course, skated her way to stardom alongside Scott Moir.

Virtue and Moir won two Olympic gold medals this January, making the couple the most decorated figure skaters in history with five medals total. The duo topped their own record high with their free dance segment, then broke the world record, for overall score, set literally minutes before by another competing couple. It was like a scene out of a movie! Well that same cinematic magic continues in the photos from this stunning shoot for Vogue Japan.

Last month, Virtue began packing for a nine week trip that would take her to three continents, five countries and 16 cities. It was during that time that she traveled to Tokyo to pose for the editorial images. She shared many sneak peeks on her social media accounts, gushing about the opportunity.

A little behind-the-scenes image from today’s @voguejapan shoot. I hope I don’t wake up to find out it was all just a dream!!! Thanks to the incredible team for making it so very, very special ? #vogue #behindthescenes #fashion

Someone pinch me. I’m shooting with @voguemagazine in Japan !!! An absolute dream come true. pic.twitter.com/zsP1ULAEnt

Virtue looks confident and sultry in photos from the shoot. In one look, she rocks form-fitting athletic gear from Burberry, which is juxtaposed against sheer fabrics and ultra-feminine lace. Mayumi Nakamura, an editor at Vogue Japan, said Virtue pulled inspiration for the shoot from her own steamy Olympic performance, which was danced alongside Moir to the Moulin Rouge version of “Roxanne”.

“I hope I don’t wake up to find out it was all just a dream!” she wrote underneath an Instagram post a few weeks back. Virtue, who was just included on ESPNW’s list of 25 most famous female athletes in the world, doesn’t need to worry about that. She has worked tirelessly for years to get to the point she is at now and there’s no dream to wake up from here. Virtue’s dream has already been realized.

Photography via Instagram/@tessavirtue17
Get the best of FASHION in your inbox Thanks for signing up!
The latest fashion, beauty and celeb news delivered right to your email #FASHIONforall Now, check your inbox to complete your subscription
We won’t ever use your email address for anything else
Want even more FASHION? Follow us on social media.