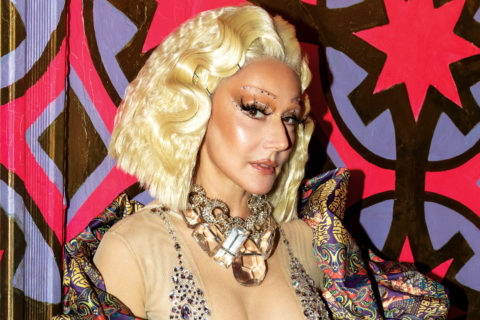 Susanne Bartsch Has Had a Decades-long Love Affair with Wigs

A wardrobe of wigs is the crowning glory of Susanne Bartsch’s 30-year reign as the queen of New York’s nightlife.

Susanne Bartsch doesn’t have a signature look. “My style is having no style,” the iconic New York City event planner laughs. “It’s always changing.” But that’s precisely why she’s been able to stay in the spotlight over the past 30 years — you never know what she’s going to do next. One day she’s curating a fashion-forward function and dancing alongside RuPaul and other famous drag queens and the next she’s designing her own capsule collection and inspiring an exhibition at the Museum at the Fashion Institute of Technology. Despite all the colourful chaos, one of the biggest constants in her life has been her love of wigs — hence the wardrobe dedicated to her collection of over 75 wigs that is currently housed in her apartment in the Chelsea Hotel.

Bartsch believes that fashion has always been in her DNA. Growing up in Switzerland, the collector describes her parents as stylish but in a more conventional way. “I could never just wear pretty shoes with a pretty dress,” she shares. “There always had to be a twist.”

To express her independence, Susanne Bartsch bought her first wig, a clip-in ponytail, when she was around 14 years old. “I would sit at a café, wearing fake hair, and try to smoke,” she laughs. “None of it worked.” Desperate to escape the uniformity and traditionalism that defined Swiss style, Bartsch left for London, England, a few years later. But it wasn’t until she moved to NYC in the ’80s that she started building her hoard of hairpieces. “At first, it was all about trying to hide the fact that I was wearing a wig, but then all I wanted to do was advertise it.”

It wasn’t long before she was given the unofficial title “queen of New York nightlife” — thanks to her fabulous parties and her 1989 AIDS fundraiser Love Ball — and the collector soon transitioned from store-bought wigs to custom hairpieces. Over the years, she has enlisted help from some of the city’s most talented hairstylists, including the late Charley Brown and the current mastermind behind her distinctive ’dos, Francis Rodriguez.

This development saw Bartsch begin to experiment with colours, textures and styles, sporting everything from a short and sleek bob to a six-in-one afro. “That was the biggest wig I’ve ever worn,” she reveals of the six-piece hair hybrid. “It was probably about three feet long, which made getting in and out of taxis very difficult.”

But for Susanne Bartsch, the purpose of her collection can be defined in two words: function and fashion. “It’s just so much easier to wear a wig than to do my own hair,” she shares. “It’s also the perfect way to finish an outfit.” This belief is especially evident on Bartsch’s social media, where she shares photos of all of her wigs and outfits. An iridescent corset coordinates with an equally iridescent aqua wig; a golden cowboy-inspired look is topped with voluminous black curls; and an angular blue bob is worn with an armour-like metallic ensemble.

Due to the elaborate nature of her looks, Susanne Bartsch often refers to her fashion as a form of drag. “I wear day drag to meetings, which usually involves just popping on a clip-in ponytail,” she says. “Then I have semi-drag, which includes heels, heavier makeup and a wig. And then there’s full drag, which is really hectic and has a more-is-more mentality to it.”

And while Bartsch’s love of over-the-top hairdos is obvious, she does recognize that it might not be for everyone. “Some people are still weirded out by wearing wigs, but it’s like anything — if you embrace it, it’ll work.” She thinks you won’t regret it if you’re willing to give it a try.

Click through the gallery below to see more of Bartsch’s wig collection. 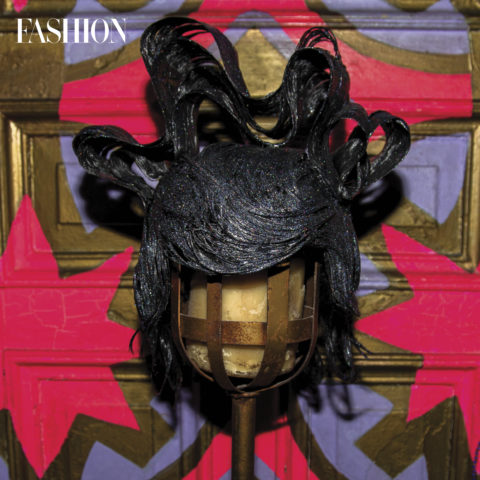 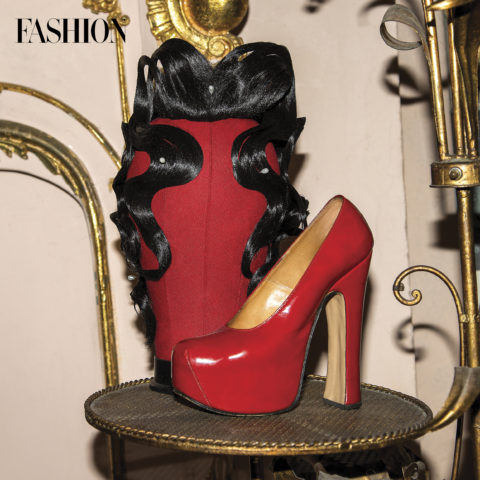 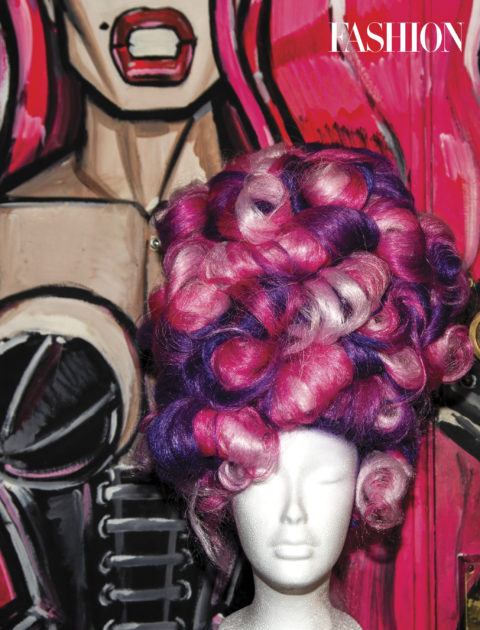 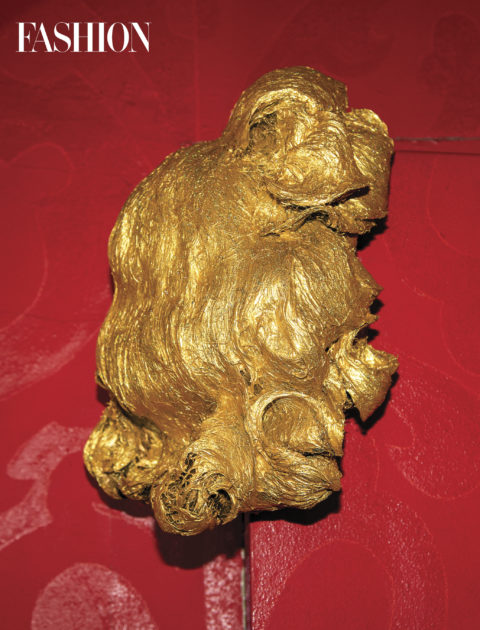 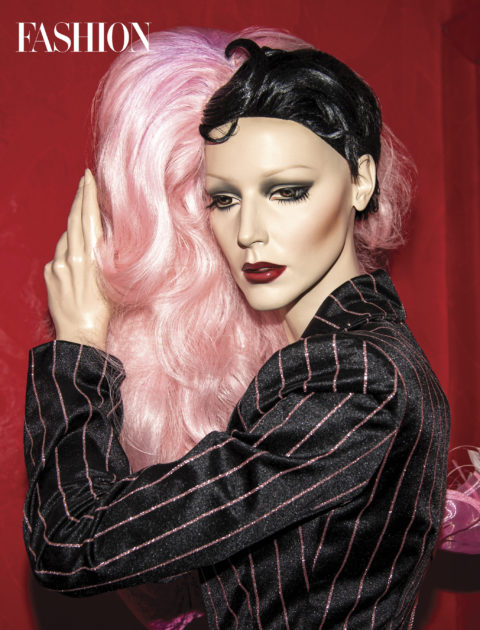 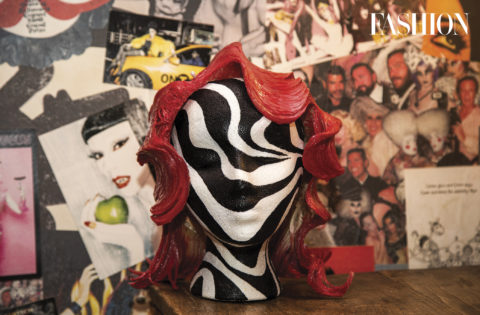 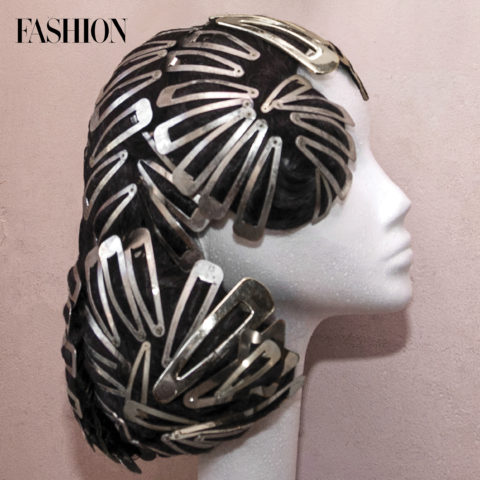 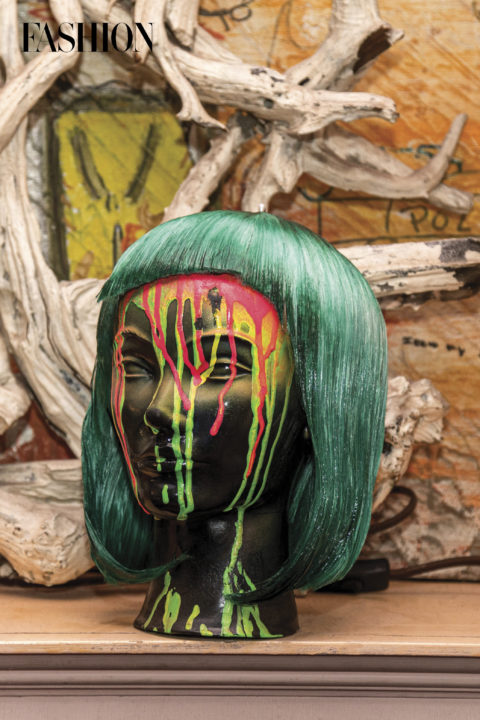 Bartsch loves a black wig; she’s especially smitten with this sculptural bob, which she wore to her cabaret series “New York, New York!”

Why only collect one thing when you can collect two? Bartsch also has quite the stockpile of Vivienne Westwood heels dating back to the ’80s, which she often wears in tandem with her wigs.

Rodriguez describes this wig as “Chicana Marie Antoinette,” as he was inspired by his own MexicanAmerican heritage. “There’s some John Waters camp mixed in,” he admits.

Bartsch wore this golden wig for the first time back in December 2021 for a holiday video sponsored by Hendrick’s Gin: Dressed in a festive red toy-soldier-inspired outfit that perfectly complements her golden mane, she pours herself a cocktail.

“The motivation for my looks is never to look male or be female,” says Bartsch of this gender-bending wig. “It’s about doing something unexpected and giving things my own twist.”

To achieve such high-gloss glamour, Rodriguez coats many of his wigs in resin. And while the process may seem tedious, most manes take less than two days to complete, he says.

Bartsch says that some really soft wigs might lose their shape if they aren’t properly stored, but this metallic mane, created by her late hairstylist Charley Brown, never will because of all the clips.

“I put a little creepiness into everything I do,” says Rodriguez of the inspiration behind all his wigs. “But I also include [some influences] from ’70s and ’80s punk because Susanne loves it.

PHOTOGRAPHY BY TATIANA KATKOVA. STYLING BY PHIL GOMEZ. HAIR, FRANCIS RODRIGUEZ. MAKEUP, DENEY ADAM.
Get the best of FASHION in your inbox Thanks for signing up!
The latest fashion, beauty and celeb news delivered right to your email #FASHIONforall Now, check your inbox to complete your subscription
We won’t ever use your email address for anything else
Want even more FASHION? Follow us on social media.