She dreamed of being a politician, specifically the president of Haiti. At almost six feet tall (an inch shorter than Michelle Obama), 35-year-old Haitian/Italian designer Stella Jean would make a commanding head of state, bespectacled in bold-faced frames and hair slicked back into a no-nonsense chignon, with the ability to articulate in four languages. We first met at a dinner last July in Rome for which she was an hour late—waylaid by preparations for a show at Altaroma, Rome’s fashion week. I didn’t mind, because I’m Canadian and there was bottomless Prosecco, but also because she has the thing all the greatest public figures seem to possess: calm charisma. If she were running for office, I’d vote for her. 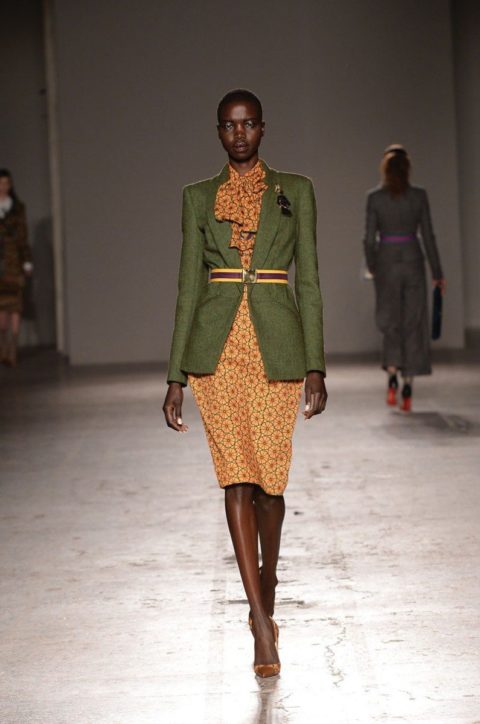 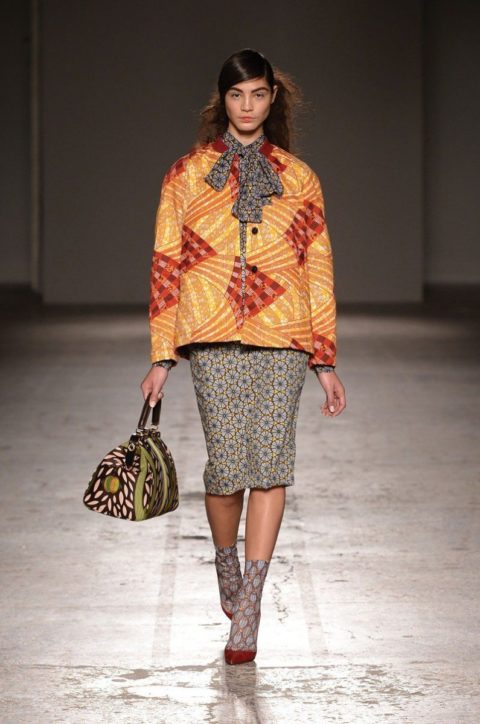 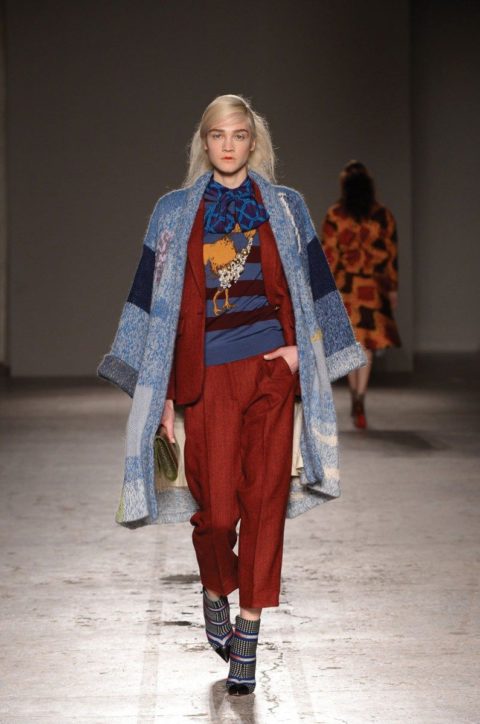 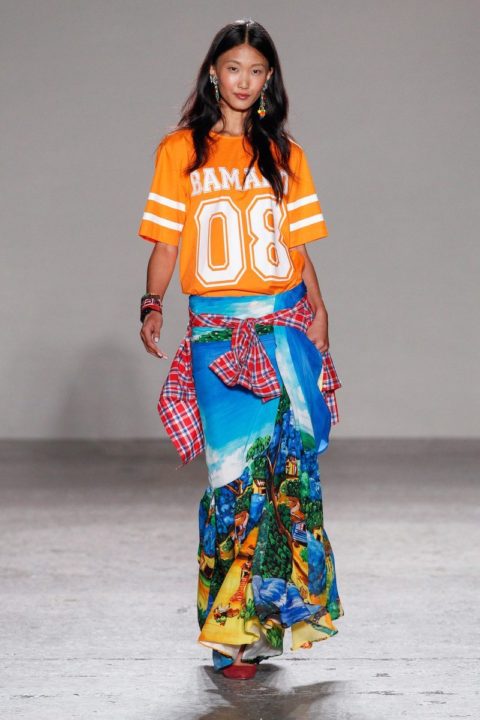 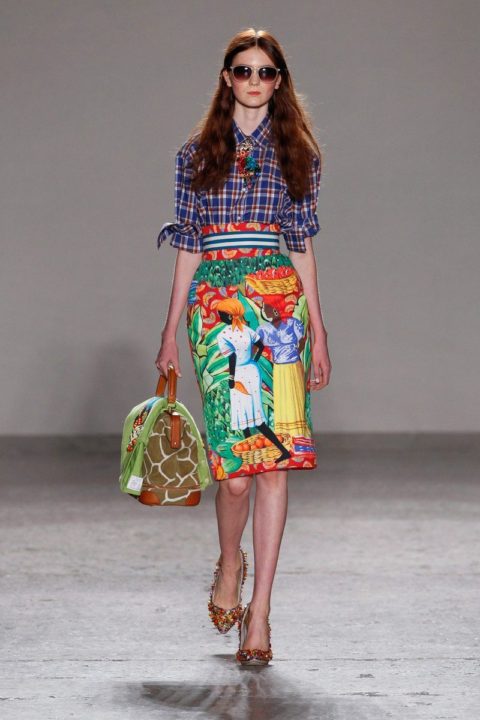 Although Jean passed on politics to deal in pins and pleating, diplomacy is, in a way, threaded through what she does. She’s coined “wax and stripes” as her design philosophy—“wax” for the African wax prints emblematic of her Haitian mother’s roots; “stripes” to signify striped dress shirts, her Italian father’s wardrobe staple. “The first collection was just to show people [that] I can put Italy, Haiti and Africa in the same look. I don’t tell you the history. I just show you,” she says. “At the same time, those cultures can communicate, one beside the other, without one suppressing the other.”

The egalitarian pairing of Jean’s parentage in her eponymous line, launched in 2011, has been thoroughly embraced, making fast fans of Italian Vogue editor in chief Franca Sozzani and renowned fashion journalist Suzy Menkes. Growing up biracial in Rome was another story. “Italy wasn’t ready,” she says. “I felt Italian, but other people didn’t allow me to be it.” From ages 16 to 18, she tried identifying as Haitian. Haitians knew she wasn’t, but they asked fewer questions about her family tree so she felt more at ease, which pushed her to study her mother’s homeland and its history, culture and art.

Jean didn’t initially include both ancestries in her designs. She applied twice to Who Is On Next, Altaroma’s platform for supporting and promoting new talent, with solely Italian artisanal pieces, and was twice rejected. Applying a third time in 2011, she was encouraged by Altaroma’s fashion consultant Simonetta Gianfelici to be truer to herself. Experimenting with one of her father’s shirts and a wax print skirt, she struck her balance. Previewing the clothes on racks didn’t sell the judges on Stella Jean, and they pre-selected another winner prior to the runway presentation. But seeing the complete looks swayed them. “Franca Sozzani said, ‘Sometimes we have to see it for real,’” recalls Jean, who came in second.

Last year, a runway altered Jean’s fate once again when Giorgio Armani invited her to present her Spring 2014 collection at his 550-seat Teatro Armani during Milan Fashion Week. It was the first time he’d extended such an offer to another womenswear designer. She didn’t think Armani had watched her show, but he had, from someplace hidden. Afterward he came over and offered her these words of encouragement: “Don’t lose your DNA.”

Genetics is what first brought Jean into the fashion industry. With her height and appearance, aided by her mother’s friendship with designer Egon von Furstenberg, Diane von Furstenberg’s first husband, Jean started modelling in her teens. The shows and photo shoots she could do without, but she loved the fittings because she could witness designers working with fabrics. With no formal design training—she attended Rome’s Sapienza University for political science but didn’t finish—Jean creates her collections the way Coco Chanel did, by draping and pinning to a model (herself, in the beginning). “It’s good that I don’t draw, in a way,” she says. “You often see amazing sketches that aren’t for a real body. If you start from the body, you work from reality.” The silhouettes she favours—boxy jackets, pencil skirts, swing dresses—are drawn from the ’50s and ’60s, her grandmother’s and mother’s style of dress. “I think they were so naturally chic and elegant,” she says. “My grandmother used to wear some Hubert de Givenchy things, but with her Caribbean touch.” Jean’s perspective, informed by personal experience, lends her legitimacy—and that has everyone excited. “So many designers put Africa in collections, but it’s an up from down approach. It’s a caricature, a parody,” she says. “It helps that I have those black roots; it gives me the possibility to have a different, more equal point of view.” She’s carried this philosophy over into a men’s collection, which debuted in 2013, and a recently launched children’s line.

Jean’s connection to Africa and Haiti goes beyond heritage and its emblematic influence in her collections. She works with the International Trade Centre’s (ITC) Ethical Fashion Initiative, a United Nations and World Trade Organization agency, to source fabrics and accessories from artisans in Africa and Haiti. This has brought her back to Altaroma for Beat of Africa, a group show of ITC designers. It includes a sneak peek at her Spring ’15 collection: There’s a skirt with a hand-woven waistband from Burkina Faso in West Africa, a bogolan (cotton dyed with fermented mud) giraffe print coat from Mali and hand-painted metal cuffs from Haiti.

A handful of these new pieces will make their way to Toronto this month—the designer’s first visit to Canada—for a trunk show at Holt Renfrew’s Bloor Street location. This collection is especially significant for Jean, and her last look at Beat of Africa embodies it: a billowing floor-length silk dress with a knife painting (a technique that involves using a steel blade to apply paint on a canvas) of Haitian women. It’s the most obvious expression of her Haitian ancestry, which makes her worry about what the family will think. “My mother won’t speak to me anymore,” she deadpans. “No, but seriously, it’s a stress. The other times were easy. Now I can do wrong.” Judging by the exuberant reaction from the fashion crowd at Altaroma, she’s already secured the popular vote.