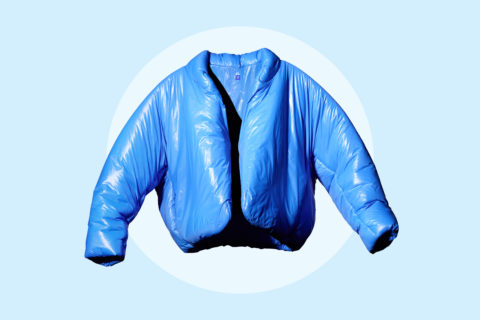 Here are details on the bright blue puffer jacket dubbed the “Round Jacket,” plus everything we know about the Yeezy Gap partnership.

Kanye West’s brand Yeezy has dropped the first piece in its long-awaited collaboration with Gap. The surprise release happened on June 8, which was also West’s 44th birthday, and features one item only: the Round Jacket. Here’s everything we know about the Kanye West Gap jacket, plus details on the Yeezy Gap partnership.

What’s the “Round Jacket”?

The Yeezy Gap Round Jacket is a bright blue unisex puffer that retails for $200 USD. Made of recycled nylon, its material is ultra-shiny, bordering on luminescent. In a press release, Yeezy Gap announced that starting June 7, they’re featuring “floating projections” of the jacket at various locations in New York City, Los Angeles, and Ye’s hometown of Chicago.

Is the Kanye West Gap jacket available in Canada?

As of right now, the Round Jacket is only available for preorder in the U.S. Orders will be shipping out in Fall 2021. Stay tuned for more announcements regarding Canadian shoppers.

When will more Yeezy Gap items be available?

The Round Jacket drop comes almost a year after Kanye announced the Yeezy Gap collaboration on Twitter. The two companies reportedly have a 10-year contract with each other, so if you aren’t able to get your hands on this first piece, don’t stress — it’s just the beginning.

Wait, didn’t Kanye West wear the jacket in public before it dropped?

West was indeed spotted wearing the Round Jacket in Los Angeles a few days before its release. We’ll be keeping an eye on the designer’s wardrobe for possible hints at future Yeezy Gap drops.