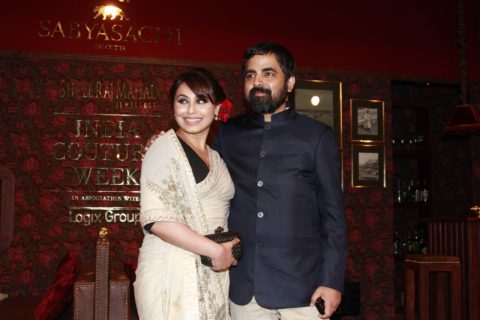 5 Things to Know About Sabyasachi, the Indian Designer Behind the Latest H&M Collab

This collaboration marks the first time the Swedish retailer has worked with an Indian designer.

16 years after the inaugural high fashion team-up with Karl Lagerfeld in 2004, the Swedish brand has tapped one of India’s most prominent and successful designers, Sabyasachi Mukherjee, for a first-of-its-kind project.

“I am happy to announce the collaboration with H&M as it allows us the opportunity to share the Sabyasachi aesthetic to a wider audience in India and worldwide,” the designer told Vogue India. “Having done couture for the majority of my career, it is very exciting to bring that finesse and craft to ‘ready-to-wear’ and to create whimsical and fluid silhouettes that bring relaxed sophistication to everyday life.”

Follow your wanderlust into the whimsical world of Sabyasachi. Our collaboration with the iconic Indian designer launches in selected stores & online 16 April. #SabyasachixHM @sabyasachiofficial

His collection for H&M includes printed dresses, blouses and saris, and will be available in-store and online globally on April 16. Read on for five things to know about the designer, whose deft contemporary use of traditional Indian textiles and crafts has made him a household name in his native country.

1. He is Bollywood’s most in-demand designer
Mukherjee, who is based in Kolkata, West Bengal (a state in Western India), recently celebrated 20 years in the fashion industry. Over the course of two decades, he has dressed some of Bollywood’s biggest superstars for everything from red carpet appearances to film shoots to personal engagements, and has also designed costumes for several Hindi films. As one of the most prominent weddingwear designers in the country, he’s also the couturier of choice for many high-profile Indian weddings. In 2018, he designed both Priyanka Chopra and Nick Jonas’s outfits for their Hindu wedding ceremony, and has also created the wedding ensembles for other Bollywood A-listers such as Deepika Padukone and Anushka Sharma.

A post shared by Sabyasachi Mukherjee (@sabyasachiofficial) on Dec 4, 2018 at 3:51am PST

2. He has presented his collections at several international fashion weeks
Known for old-world, ornate designs that take countless man hours to produce, Mukherjee’s work has earned accolades from both Indian and international organizations. Over the course of his career, he has presented his work at several global fashion weeks. He was the first Indian designer to showcase a collection in Milan, in 2004, and has since presented his line at New York, London and Miami Fashion Weeks. In India, he regularly presents his work at both Lakme Fashion Week (in Mumbai) and Lotus India Fashion Week (in Delhi), where his shows—bursting with designs rich in texture, colour and craftsmanship—are some of the most anticipated on the schedule.

A post shared by Sabyasachi Mukherjee (@sabyasachiofficial) on Nov 2, 2019 at 8:28pm PDT

3. He has collaborated with Christian Louboutin on multiple occasions
Legendary footwear designer Christian Louboutin bumped into Mukherjee at his Mumbai store several years ago and has worked with the designer numerous times since then, creating men’s and women’s shoes inspired by the designer’s rich visual imagery. Featuring studs, spikes and Indian embroidery and textiles, the shoes are a reflection both of Louboutin’s and Mukherjee’s distinct styles. The two have since expanded the collaboration to include handbags crafted out of silk, velvet, brocade and sequins.

4. He has done a homeware line with Pottery Barn
Back in 2016, Mukherjee made his first foray into the world of homeware with an exclusive collection for Pottery Barn. A series of vibrantly printed plates, platters and trays formed the crux of his kitchen collection for the brand, while colourful bedding, luxurious rugs and embroidered cushions rounded out the rest of the home decor line.

5. He’s opening a flagship store in New York
So far, not much is known about the store except that it’s set to open in September 2020. But that’s not the only New York association the Indian heritage brand is looking forward to this year. Sabyasachi’s line of handcrafted fine jewellery will also be available for purchase at a “selling exhibition” at Manhattan’s Bergdorf Goodman department store between January and March 2020.

A post shared by Sabyasachi Mukherjee (@sabyasachiofficial) on Jan 3, 2020 at 8:36pm PST