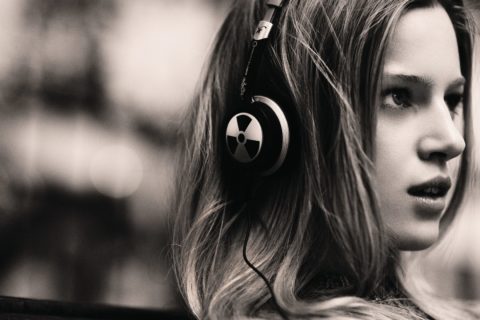 Podcasts Are Ushering In a New Era of Self-Help

“You can’t wait for yourself to have enough confidence, because those things are never going to come by waiting.”

Last year, I decided that 2017 would be a year of change. I would take risks. I would actively seek happiness. I would purge my surroundings of excess “stuff.” I would focus on my relationships and devote more time to myself.

What spurred this on? I had just made a big life change—I got married—so perhaps that opened the floodgates for smaller ones. Having spent most of my 20s single-mindedly devoted to my career, I had arrived at a place where I felt mentally taxed and riddled with anxiety, and I (unfairly) judged my personal worth through the success I did or did not have professionally. I also prioritized work over family and friends—all out of the fear that if I didn’t work longer and harder, I’d fall behind. On the cusp of my 30s, I wanted more from life than just a shiny job title, so I took a leap of faith and made another major change: I became a freelance writer and editor, which was the first step in figuring out what really makes me happy.

Listening to podcasts also helped give me the courage to listen to my inner voice. My gateway drug to self-improvement was Serial, the investigative journalism podcast that became a cultural phenomenon, but eventually I found myself listening to podcasts like Happier by Gretchen Rubin, Magic Lessons by Elizabeth Gilbert and The Minimalists. They all fall under the self-improvement genre and encourage a similar end goal: Be happier, healthier and more spiritually, emotionally and physically fulfilled.

In recent years, podcasts have become a fast-growing medium for self-improvement. Self-help—in whatever form, whether it’s books, seminars or retreats—is a multibillion-dollar industry (more than $9.6 billion at last count), according to a 2015 study by market research company Bharat Book Bureau. Whether you’re looking to de-clutter your life (Marie Kondo-style), achieve spiritual enlightenment or make a career change, there’s a podcast for that. We all have our reasons for listening to this genre of podcasts. Mine is for courage, inspiration and self-reflection, but others might be working mothers seeking balance or people dealing with serious issues of loss, grief or depression.

Rubin, author of The Happiness Project, started her Happier podcast in February 2015 because she wanted to develop “deeper engagement” with her audience. “People feel I’m more accessible or that they have a closer connection to me personally,” she explains. “When we hear other people talk about how they worked through some of these things, somehow it helps us understand ourselves better.” Rubin, who co-hosts the podcast with her sister, Elizabeth Craft, a TV writer and producer based in Los Angeles, explains that she often receives emails and voice mails from listeners. “They’ll say ‘I’m like you, Gretchen’ or ‘I’m like you, Elizabeth’ and really identify with us,” she says. Podcasts have become a virtual support group of sorts and don’t require an immense time commitment. You can listen on your commute or while running errands, which is fitting given the go-go-go nature of our lifestyles.

Whether it’s podcasts or books, the self-help industry isn’t without its fair share of critics. In his book Stand Firm: Resisting the Self-Improvement Craze, Svend Brinkmann, a Danish professor of psychology, criticizes the industry for encouraging navel-gazing, distracting people from more serious problems and keeping them from experiencing real emotions. He also points out that the reason the self-help industry continues to thrive after all these years is that people are no closer to feeling emotionally, physically or spiritually fulfilled. “People try one thing after another without ever really becoming satisfied or happy,” he says. “So the self-help industry has paradoxically come to support a feeling that things are never quite good enough. There is always something to improve and optimize.” He likens this to what doctors call the “health paradox,” which means that the more help patients receive, the more they self-diagnose and the worse they feel. If that is the case, is this self-devotion all for naught?

Rather than reaching for a self-help podcast or book, Brinkmann suggests turning to fiction and poetry—“genres that take you away from yourself rather than make you focus even more on yourself and that do not present life as a linear progress toward happiness but present human existence with all its real ups and downs.” I took note, but I didn’t need any convincing—my bookshelves were brimming with books, many of which were waiting to be read, like The Arrangement by Ashley Warlick, Swing Time by Zadie Smith and The Summer Before the War by Helen Simonson.

In some ways, I can see what Brinkmann is saying. A few podcasts have caused me to feel more guilty and anxious than positive. Take The Minimalists, for example. While I find the less-is-more philosophy of its creators appealing, at times I feel like an impostor because deep down I’m not a minimalist. The proof? I have decade-old magazines that I can’t bear to throw away. But then there are podcasts (like Happier) that have taught me to practise self-care—like taking the time to do yoga or watch a romcom—without feeling like I’m being self-indulgent.

Despite Brinkmann’s criticism, Rubin believes there’s value in self-help for everyone. “People assume that [those] drawn to self-help material are hanging on by the edge of their fingernails and desperate for help,” she says. “The people who are most drawn to self-help are already high-performing. They just want to be more productive, more creative, healthier or more energetic.” It isn’t a sign of self-obsession either, says Dr. Steve Orma, a clinical psychologist based in San Francisco who has his own podcast, Selfish for Success: “Narcissism is different because narcissists don’t generally think they need to improve.”

Are the people we seek advice from via our headphones the best sources of insight, though? It’s no secret that many of them aren’t certified in counselling or psychology. For instance, on the podcast Beautiful Stories from Anonymous People, hosted by comedian Chris Gethard, strangers call in to talk for an hour about their problems and Gethard cannot hang up. While Gethard is quick to say that his own therapist advised him not to give people advice because he’s not certified to do so, sometimes he just can’t help it, and he has a cult following for it.

“I don’t think there’s any more danger than reading a magazine or going to a website,” says Orma about this tendency to look to non-experts for help. “[It’s] when you trust people blindly just because they have a podcast or a title. Ask [yourself] whether it makes sense, do the research on your own and gather the facts. Don’t blindly act on what someone tells you, particularly when it comes to your mental health.” While there’s no data yet on whether podcasts have resulted in people seeing therapists less often, Orma thinks they have lessened the stigma of mental health and made people more open to seeking professional help.

Am I a better person since I started listening to this genre of podcasts? It’s too early to tell. But I can’t deny the role they have played in giving me the nudge I needed to make changes. At the same time, I’ve learned that a podcast can’t just magically switch on an internal happiness button. I still occasionally fall back into old habits of worrying about the minutiae instead of looking at the bigger picture. But then I’ll recall a bon mot from a podcast—it can be remembering that outer order leads to inner calm, as Rubin says, or something more profound. These days, the latter is a piece of advice that Brandon Stanton, of Humans of New York fame, offered on Gilbert’s Magic Lessons about not waiting to do things until you’re ready: “You can’t wait for yourself to have enough confidence, because those things are never going to come by waiting.” It feels good to work toward the person I want to be.

Photography via David Oldham/Trunkarchive
Get the best of FASHION in your inbox Thanks for signing up!
The latest fashion, beauty and celeb news delivered right to your email #FASHIONforall Now, check your inbox to complete your subscription
We won’t ever use your email address for anything else
Want even more FASHION? Follow us on social media.