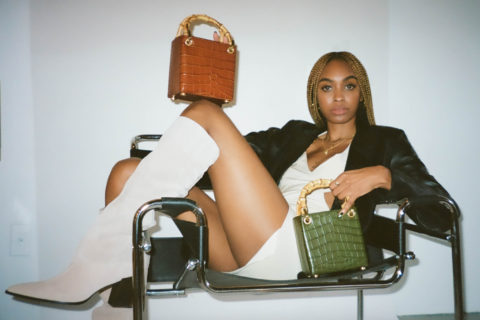 "I felt like this process was meant to be."

“I’m looking forward to romancing people with my designs,” says Kakra Juma-Nuamah, founder of the newly launched Toronto-based label, Outnumber. Juma-Nuamah – who previously worked for Ssense, where she honed her appreciation for the art of e-commerce and luxury design – introduced her brand with a selection of sultry apparel and lingerie items, as well as a bold, boxy, made-in-Italy bag called the Mini Firma.

“I always thought that if I’m going to [start a brand], I want it to be of high quality,” Juma-Nuamah says of her pieces. “One of the places in the world where that exists, to me, is Italy.” After digging in to finding suppliers and makers to help her realize her dream of launching Outnumber (“I’m a research queen,” she affirms), Juma-Nuamah connected with an artisanal family business and it proved to be a match made in handbag heaven. The Mini Firma currently comes in five colours and features a bamboo handle with alligator-embossed leather; it’s a timeless scene-stealer that, if street style were still thriving, would surely be seen on the arm of a fashion show attendee or three.

Juma-Nuamah says she’s driven by a pursuit of perfection when it comes to her work. “I want to create something that means a lot and would stand the test of time,” she says. Perhaps that’s why the iconic designs from Tom Ford’s tenure at Gucci resonate so deeply with her; and you can see the ‘90s influence in Outnumber’s selection of apparel that includes a halter-style dress and top. “I’m really into a refined, empowered look,” Juma-Nuamah notes, adding that she was inspired to design the brand’s tops after creating a dustbag for the Mini Firma; the effect is a cheeky garment that would make a surrealist artist proud.

In this way, creativity has always been an outlet for Juma-Nuamah, who says that the process has carried her through tough times. “I turned to creating and designing things when I was little; that was my escape and way to feel whole in the world despite the outside world being very chaotic for me. Without it, I don’t know where I’d be.” She notes that she admires Virgil Abloh and Mowalola Ogunlesi’s contributions to the design landscape, the latter in particular for her “fearless and authentic” approach.

Juma-Nuamah hopes that now her own presence on the fashion stage will inspire others who need it. “I wanted to show people that you don’t have to come from anything to make a big dream happen,” she says. “My upbringing wasn’t the easiest, and that’s why I’m determined to pave a path of my own.”

This tenacity is perhaps no more evident than in Juma-Nuamah’s decision to launch Outnumber this year (albeit later than her initially-planned March release). “I had friends worry about me launching, saying that maybe it isn’t the right time,” she recalls. “I thought, I’ve been working on this for about three years and I just had a gut feeling to go for it. I feel like sometimes fear prevents people from doing things, and my understanding is that you don’t really know what’s going to happen – tomorrow isn’t promised.”

She adds that when the pandemic hit in early spring, it gave her a moment of pause to reflect on how she wanted to continue and finesse her brand before putting it out into the universe; and she continues to ideate, saying that she’s working on a tote bag as well as footwear styles.

“I felt like this process was meant to be,” Juma-Nuamah says when highlighting how pleased she is with the look of her website, which was inspired by a restaurant in Florence, Italy that she visited while there on a business trip. “It’s sleek, cool, simple.” And because of that, it’s a perfect extension of her designs.