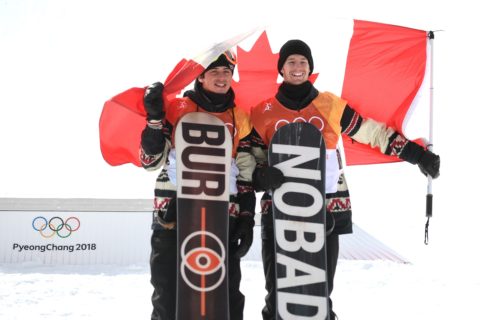 If you watched Canada’s Olympic Freestyle Snowboard team fly down the hills of Pyeongchang and wondered if they were wearing a mere sweater in sub-zero temperatures, you’re not entirely wrong. American snowboard brand Burton is the creative force behind the team’s competition gear, and the northwest coastal-inspired sweater concept is a riff on vintage Canadian cardigans.

You know the sweaters we’re talking about, right? The most famous is the Cowichan, made by the B.C. First Nation tribe of the same name. But various iterations have been immortalized in curling rinks, vintage markets and family photo albums across the country. With a renewed interest in slow-fashion techniques and crafting, these historical gems are finding new fans.

Burton’s head designer Greg Dacyshyn was actually born and raised in Hamilton, Ontario, so he knows his way around these chunky heaps of Canadiana.

When Dacyshyn learned Burton would be working on the Canadian snowboard freestyle uniforms, he approached Corrine Hunt, a well-known West Coast artist, whose work draws from her First Nations Komoyue and Tlingit heritage. For the project Hunt created four totem images of a bear, a raven, a sun and an orca.

“The motifs on the uniforms represent strength, beauty, creativity and agility,” said Hunt in a Burton press release. “Emblazoned with the bear, raven, sun and orcha, the athletes will shine inside and out.” Hunt is familiar to many Canadians already because she co-designed the 2010 Vancouver Olympic medals.

To get that sweater effect, Hunt’s artwork was given to the Granted Sweater Company in Vancouver.

The second generation family-run business designs and produces all its sweaters locally, using only domestic wool yarn. Each of the Burton x Granted sweaters took upwards of 25 hours to make, before it was photographed, and reproduced using a dye sublimation printing technique.

“When you look at the uniforms up close you can almost see the thread,” he says of the final outerwear product that had the four images printed on Sorona, a Dupont renewable plant-based fiber that has been blended with polyester. “That fiber is really strong with a four-way stretch so it’s great for athletes.” 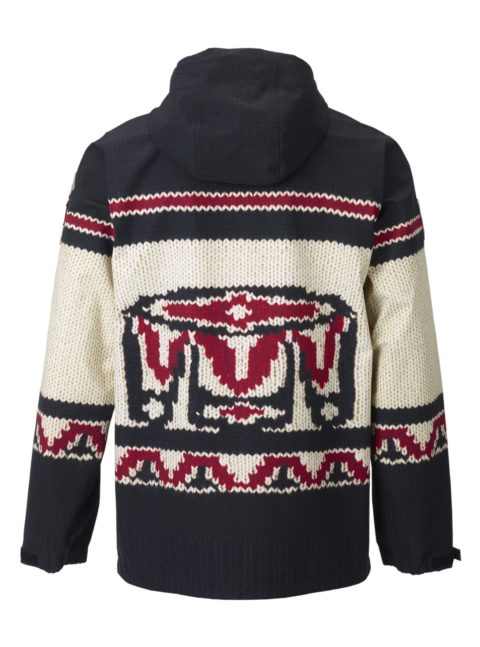 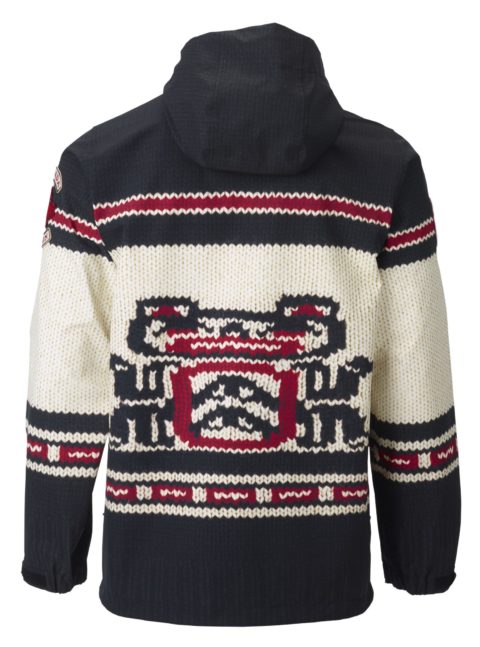 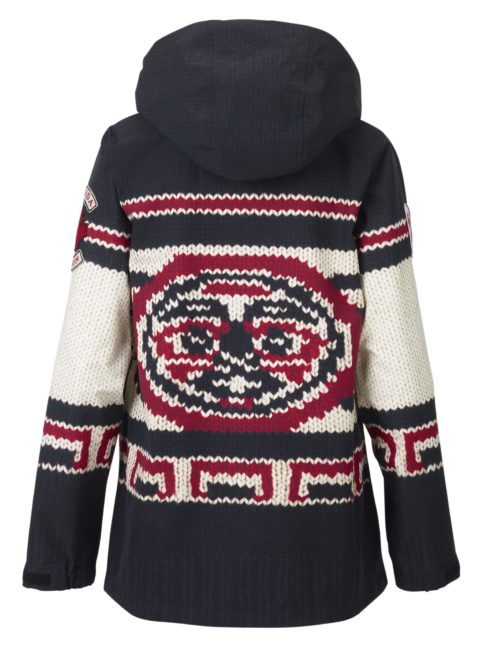 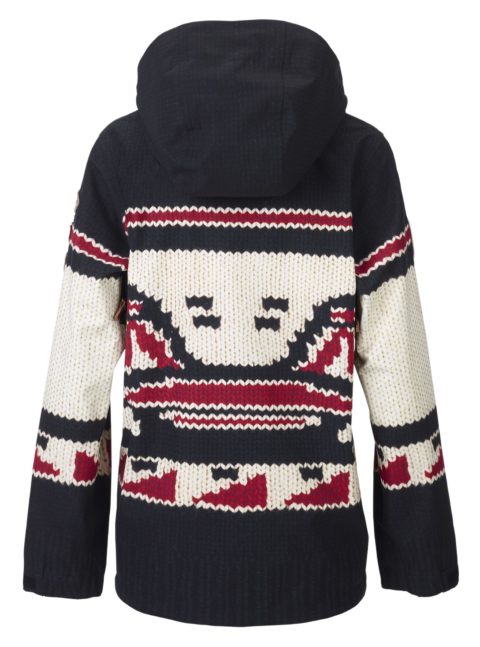 While designing a uniform, Dacyshyn says he tries to do something interesting and creative while acknowledging the heritage of a country rather than the obvious colour block thing. “That’s not what snowboarding is about,” he says. “It’s about individuality, and creativity and having fun.”

As official sponsor of the Canadian National Freestyle Team, Burton created a head-to-toe uniform of over 10 items, including the hand knit Granted Sweater to match the outerwear the athletes received. But unfortunately for winter sports fans, unlike other Olympic paraphernalia, this particular uniform will not be sold to the public. Burton is also a longtime sponsor of team star Mark McMorris, who picked up bronze in the Slopestyle final last weekend. Canadian Olympic snowboarders face further competion in Big Air category next week.

Funnily enough, Dacyshn also designed the American snowboard freestyle uniforms, so he knew how different the looks would be. If you recall gold medalist Reg Gerrard’s gold suit, Dacysyn says it was inspired by old Apollo Mission spacesuits, as if boarders were getting ready to walk on the moon.

While talking to Dacyshyn from Burton HQ in Burlington, Vermont, I discover he is especially well versed on the topic of these thick and heavy toppers. He is quick to remind me that Cowichan sweaters can “only be made by the Cowichan people.” And he recently connected Granted Sweaters with the Grateful Dead camp on a limited edition release.

“I’ve got some beautiful sweaters,” he says. “And besides, one of my heroes, The Big Lebowski, wore one pretty much the whole movie.”

Bronze medallist Canada's Mark McMorris (L) and silver medallist Canada's Max Parrot celebrate with a Canadian flag after the victory ceremony at the end of the men's snowboard slopestyle final at the Phoenix Park during the Pyeongchang 2018 Winter Olympic Games in Pyeongchang.
Get the best of FASHION in your inbox Thanks for signing up!
The latest fashion, beauty and celeb news delivered right to your email #FASHIONforall Now, check your inbox to complete your subscription
We won’t ever use your email address for anything else
Want even more FASHION? Follow us on social media.