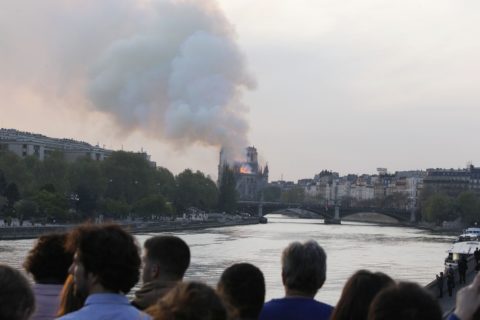 Fashion Might Be What Rebuilds the Notre Dame Cathedral

Generous donations have already started pouring in for the devastating fire that destroyed a large portion of Paris’ Notre Dame Cathedral on Monday afternoon, and leading fashion design companies are among the first to pledge millions of dollars to the historic buildings restoration.

The LVMH Group CEO Bernard Arnault announced they will be donating €200 million ($226 million). The group owning Louis Vuitton, Dior and Givenchy, is only one of many companies that have pledged to donate to the catastrophe.

"In the wake of this national tragedy, the Arnault family and the LVMH Group pledge their support for #NotreDame. They will donate a total of 200 million euros to the fund for reconstruction of this architectural work, which is an integral part of the history of France." _ #notredame #paris #lvmh

Francois-Henri Pinault of the Pinault Family, and husband of actress Salma Hayek, has agreed along with his father to make a sizable donation. The familly, who runs the luxury goods owner Kering runs Yves Saint Laurent, Gucci, and Alexander McQueen, have agreed to put €100 million ($113 million) toward rebuilding the cathedral.

The Bettencourt Meyers family and the Bettencourt Schueller Foundation along with French cosmetics brand L’Oreal will be donating €200 million ($226 million).

Apple’s Tim Cook has also announced they will join the fashion and beauty brands in donating, however the amount is unknown at this time.

We are heartbroken for the French people and those around the world for whom Notre Dame is a symbol of hope. Relieved that everyone is safe. Apple will be donating to the rebuilding efforts to help restore Notre Dame’s precious heritage for future generations.??

The twelfth-century church’s high ceilings were reduced to ash along with its iconic spire, while some of the stone architecture, including its two towers, remain intact. More than 50 Go Fund Me campaigns have been launched worldwide.

You can donate here: http://www.notredamedeparis.fr/friends/donate/