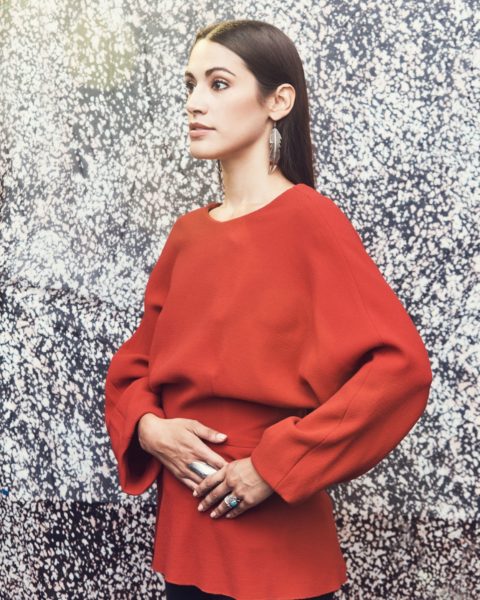 “It’s Not Cool To Wear A Headdress”: Looking Ahead to Vancouver Indigenous Fashion Week

Before becoming a youth worker in Vancouver, Joleen Mitton was a model who traveled the world for work. Mitton is of Plains Cree, Scottish and French heritage but was frustrated at seeing young indigenous kids ignoring their heritage, while dying their hair blonde because they looked up to Miley Cyrus. So Mitton decided to combine her culture and fashion smarts to launch Vancouver Indigenous Fashion Week (running July 26 to July 29) in an effort to bring the storytelling and resilience of modern indigenous fashion into the spotlight in an honest way.

New York based designer Korina Emmerich is one of 40 artists showcasing her designs at the event. Emmerich has been busy since competing on Project Runway in 2014 and making her Spring debut at Mercedes Benz Fashion Week in New York the following year. We caught up with Emmerich to chat about her line, EMME, cultural appropriation, and what to expect at Vancouver Indigenous Fashion Week.

You say that each collection is inspired by three major elements: music, art, and culture. How are your indigenous roots reflected in your collections?

“I grew up as a jingle dress dancer in powwows and I think the vibrant colours have really influenced me. I also grew up in Oregon, where Pendleton Woolen Mills is located, so Pendleton was everywhere. My dad gifted me a Pendleton blanket when I graduated from high school. The blankets have always been around and I really see that influence as well. The Chief Joseph blanket has been my favourite since I was a little girl and I see the colour story of those blankets coming out in my collections.”

Tell me a bit about the collection that you’ll be showing at VIFW.

“It’s inspired by traditional trade blankets, beadwork, and how that traditional art form has inspired contemporary art of today, more specifically, abstract minimalism. The collection is titled ‘Love Sees Color’ – and I work mostly in bright colours – growing up there were these t-shirts that said ‘love sees no colour’ and I always thought that was kind of silly because I think love should see every colour – be it race, ethnicity or LGBTQ – so that’s one thing that I wanted underlying this collection. It’s something you deal with in whitewashing in Hollywood. We just need to really recognize the differences between each other in order to create that love.”

“I’m working on this one jacket – I’ve been working on it for probably a month – it’s all hand done. It’s made of these tiny one-by-one inch leather squares which I’m upcycling from past collections, and I’m building this jacket that kind of looks like feathers on a bird with the way it lays but I’m creating a pattern within the jacket. So it’s going to be pretty dynamic. That’s definitely my favourite piece because it’s the one I’ve put the most time into.”

There’s a lot of discussion around cultural appropriation. How would you define this?

“That’s one thing we need to be talking about because a lot of people who are perpetrators of appropriation are not necessarily doing it from a place of hate, but a place of ignorance. Keeping the discussions going on why it’s not cool to wear a headdress and how important that is, or why it’s not cool to name an underwear line ‘Navajo.’ Don’t even get me started on mascots which are just straight racist. I wouldn’t wear a purple heart because it looks cute on my jacket. Wearing a headdress is a similar violation of that. Of course we’re all inspired by beautiful things. We have a long tradition in beautiful clothing and beadwork, and people will forever be inspired by that. I just urge people to do their research. Be inspired, but don’t steal or disrespect a culture in doing so.”

What are you most looking forward to for VIFW?

“I am most excited to meet all the other designers that are doing amazing things. A lot of times people want you to be a native designer. Can I be a designer who happens to be native? Isn’t that cool too? So I’m excited to meet everyone and see what so many people are doing because it’s such a huge community.”

“I will say vaguely, I am working on some custom tour clothing for musicians. So that’s really exciting for me. I’m trying to stay really open. I find I have so many more opportunities when I have an open heart and I’m open to the world; a lot of stuff starts flooding in. I always say if you keep working, the opportunities will come because when they do come, you’re ready for it. Immediately next, I’ll be showing in New York this September. It’s going to be the same collection but I’m excited about that.”

Photography by Jonathan Nesteruk
Get the best of FASHION in your inbox Thanks for signing up!
The latest fashion, beauty and celeb news delivered right to your email #FASHIONforall Now, check your inbox to complete your subscription
We won’t ever use your email address for anything else
Want even more FASHION? Follow us on social media.