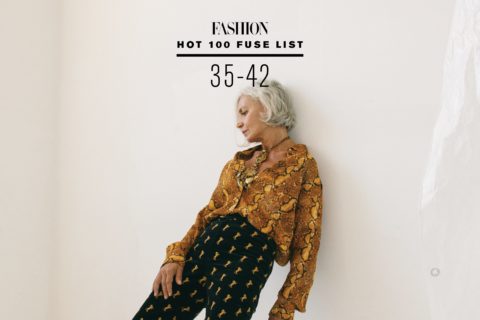 Get acquainted with these faces

In our Winter issue, FASHION editors rounded up the 100 people, products and experiences we think will blow up in 2019. It’s our inaugural Hot 100 Fuse List. From the workouts you’ll be doing, to the new designers and destinations you’ll see on your feed, this is your guide to being in the know this year. Here is our roundup of the faces you’ll be seeing on the catwalks. While pretty always gets you noticed, in 2019, models need more than looks to succeed—they need a spark.

“I was shooting with my daughter in France at Place Vendôme, and there was a lady walking her dog who came by with her phone and said, ‘Is this you?’ I said, ‘Yeah, it is.’ And she said, ‘I follow you and I love you,’” recounts Ghanem. At 53, the personal trainer might seem an unlikely fashion influencer, but she is known for mixing high and low, contemporary and vintage.

“I only add a few pieces to my wardrobe every season,” she says. “I don’t buy just to buy.” Instagrammers aren’t the only ones taking a liking to the long-legged, silver-haired beauty: Ghanem has worked with brands like Browns Shoes, Club Monaco, Reitmans and Sephora. What started out as a mother-daughter project (Cheyenne El-Khoury is the talent behind the lens) has propelled Ghanem into the limelight.

But she’s not letting any of the hype go to her head. “The first thing I wanted from my Instagram was to tell women that no matter their age, they can make themselves visible,” she says. “They still exist.” — By Jacquelyn Francis

You might know her… For being the first Indian woman to walk in a Balenciaga runway show (Spring 2017). Nair also appears in the Hu Holi campaign for Adidas and was on the September 2018 Vogue India cover.

Spark: “I have a responsibility to girls who haven’t seen a South Indian with their skin tone being called beautiful in mainstream media.”

You might know her… From her 2018 CAFA Fresh Face Award of the Year or for walking the runways of Alexander Wang, Tibi and Margiela. She has also appeared in Adidas and M.A.C campaigns.

Spark: “The red hair and freckles are things I was bullied for, and now those are what get me jobs.”

Eavesdrop on hot gossip, but make it fashion.

You might know her… From her runway work with Louis Vuitton, Jeremy Scott and Chloé. She is also one of the faces of Maison Margiela’s Mutiny fragrance.

Spark: Quinlivan told W that being trans gives her room to dress eccentrically “without people rolling their eyes.”

Dear future bae if you ain’t tryna look at me like this I don’t want it @princejdc ??‍♀️??‍♀️?

You might know her... As the model “bride” who closed Chanel’s Fall 2018 Haute Couture show and who wore this stunning tulle Scarlett O’Hara-style ball gown from Off-White.

Spark: “Even if I become the richest model in the world, I will still be a refugee,” Akech told CNN Style.

Just want to go back and do it all over again! ??? @annasui by ? #fashionweek #annasui #patmcgrath #nyfw

You might know her… Because British Vogue EIC Edward Enninful called her his “favourite new model.”

Spark: It runs in the family. Archer first appeared in British Vogue in an English-countryside-themed Tim Walker editorial with her siblings when she was just a child.

Home: South Sudan (born in Ethiopia and raised in Kenya)

You might know her… For dominating the Fall 2018 runways. Remember that black tuxedo jacket with pink duchesse ruffles at Alexander McQueen?

Spark: Being like Naomi Campbell was her childhood dream. “Imagine when you become that person,” she told Vogue.com.

You might know her… For making history in 2015 as the first model with Down syndrome to walk in New York Fashion Week. Since then, Madeline Stuart has been busy modelling in London, Paris, China and Dubai, en route to amassing an Instagram following of over 180,000. “She is the queen of disability in America because she has helped change it for everyone,” her mother, Rosanne, told Vogue Australia. “Any organization you talk to, they’ll tell you that Madeline is the one who opened the door.” With representation and inclusivity becoming ever more important, particularly in the fashion community, we can expect to see a lot more of Stuart in the future.

Spark: In 2017, Forbes highlighted Stuart for “normalizing Down syndrome” in its Diversity in the Fashion Industry roundup.