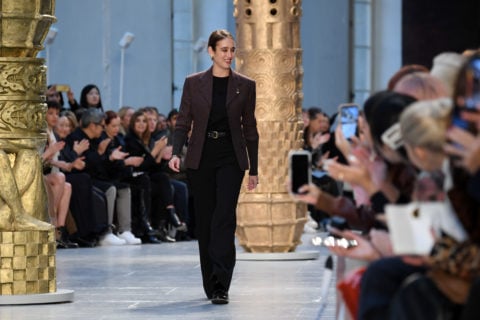 Just in: Natacha Ramsay-Levi is Stepping Down at Chloé

The designer is leaving after four years at the helm.

French fashion house Chloé is losing its creative director today, with news breaking this morning that Natacha Ramsay-Levi has resigned. The designer has been at the helm of the fashion house for four years – her resignation is effective immediately.

Ramsay-Levi joined the house in 2017 (replacing Clare Waight Keller) after leading womenswear at Louis Vuitton from 2013.

Taking to Instagram to announce the news, the designer wrote, “Over the last four years, I have had the great privilege, with the support of Chloé’s team, to express my own creativity. I am very proud of what we have accomplished together with kindness, consistency and authenticity.” She added that the brand has been supportive of her decision to step down, noting that the past couple of months have allowed her to take stock and decide on the best path for herself moving forward. “Over the last months of health, social and economic turmoil, I have given thought to the changes I want to see in our industry and how to better align them with my creative, intellectual and emotional values. It is this reflection that makes me consider my future differently and desire to pursue new opportunity.”

She praised the brand saying that it will “remain the founding place of the emergence of the expression of my creativity, it is in this state of mind and carried by my deep respect for Chloé, that I turn towards a new future, which this house will have helped to illuminate.”

Her replacement has not been named but according to WWD, a press release shared by the house said they would be named “in due course.”

Photo by Pascal Le Segretain/Getty Images
Get the best of FASHION in your inbox Thanks for signing up!
The latest fashion, beauty and celeb news delivered right to your email #FASHIONforall Now, check your inbox to complete your subscription
We won’t ever use your email address for anything else
Want even more FASHION? Follow us on social media.