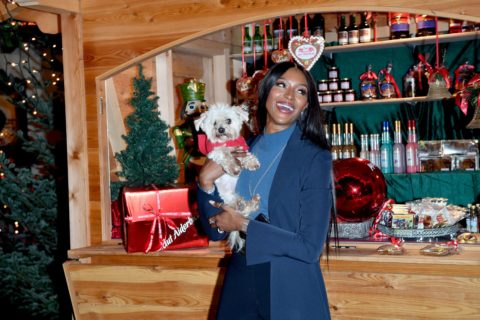 My new @youtube channel, ‘Being Naomi’ is now live !! I am SO incredibly grateful and looking forward to finally sharing this project with the world.  It’s amazing that I have the opportunity to tell you my story, show you who I really am, and inform you about the issues that are close to my heart.  I can only hope that by sharing this intimate look into my life and my journey, it will somehow inspire yours. I hope you enjoy #BeingNaomi ♥️ Music by courtesy of @wizkidayo Watch at >> www.youtube.com/Naomi (Link in Bio)

Naomi Campbell is a Vlogger Now

“Am I crazy? I’m opening my life to Youtube,” squawks Naomi Campbell as she clacks together a movie clapperboard at the beginning of her very first Youtube video. It’s a teaser video for Campbell’s new Youtube channel, Being Naomi, which promises to share the wisdom acquired by the 48-year-old supermodel after four decades in the public eye. “This is the day we live in and I want to share the things I’ve learned,” intones the model. Campbell also hopes her videos will serves as inspiration for young African women to follow their dreams. The model and cultural icon, who most recently appeared on the runway at Jeremy Scott’s H&M x Moschino show, is the first supermodel to launch her own video content creation channel. She plans to release a video on December 13th titled “My Journey” and a New Year’s message on January 3rd. If the rest of her career is any indication, we predict her Youtube channel will be stratospherically successful. (WWD)

The New York Times once described Levi Strauss & Co as “the most litigious [company] in the apparel business” and the denim juggernaut isn’t backing away from that reputation any time soon. Levi’s began sewing fabric tabs onto the back pocket of their jeans as early as 1936 and trademarked the detail in 1949. Since then, they have sued brands such as Diesel, The Limited, Guess, Benetton, Forever 21, Dolce & Gabbana and more. YSL is the latest target of the brand’s combative legal behaviour. The brand alleges that back pocket tabs on YSL jeans were created “with the intent to cause confusion, mistake or deception,” according to court documents. Fashion lawyer Douglas Hand suggests that Levi’s lawsuits are an important way to police the misuse of a trademark to help ensure the integrity of the brand. The court documents paid a slightly more petty picture: “Unless YSL is restrained by this court, it will continue and/or expand its illegal activities and otherwise continue to cause great and irreparable damage and injury to LS&Co.” (WWD)

Quirky Dutch couture designers Viktor & Rolf have teamed up with French lingerie label Aubade for a capsule collection that will roll out in June 2019. Aubade is known for the artisanal construction of delicate separates, and the line will feature Viktor & Rolf’s unabashedly feminine theatrical flourishes, most notably their signature bow motif. The designers have not forayed into lingerie in 12 years, since the label designed a diffusion collection for H&M in 2006. “Couture is like a laboratory for ideas and experimentation,” designer Viktor Horsting told WWD. “There are a lot more restrictions when designing lingerie. But we actually really liked it, perhaps because we are so used to expressing ourselves freely with couture.” (WWD)

2019 will be a year of awakening for the fashion industry, one that will go down in history, finds The State of Fashion 2019, a new report co-published by The Business of Fashion and McKinsey & Company today. Greater China will for the first time in centuries overtake the US as the world’s largest fashion market, while external shocks to the system continue to lurk around the corner. Industry growth is therefore expected to slow to 3.5 to 4.5 percent, slightly below 2018 figures. The State of Fashion 2019 also reveals the 'super winners:' 20 publicly-listed fashion companies that are dominating the industry in terms of value creation. Furthermore, the report outlines the top 10 industry trends that will shape fashion in 2019, from underlying consumer shifts to fundamental changes in the fashion system. Download the in-depth report now. [Link in bio] #fashion #stateoffashion #BoFVOICES ? Cover illustration by @andreas.samuelsson

The Business of Fashion released their State of Fashion report for 2019 this week, which contains many fascinating insights for industry insiders. The report predicts that the ever-widening gap between luxury and downmarket retailers will continue to increase, leaving little room for retailers who produce clothing at a mid-range price point. “Looking at segments, only value and luxury will perform very well in 2019, growing by 5.0 to 6.0 and to 5.5 percent,” says Achim Berg, a senior partner and expert on the fashion and luxury industry at McKinsey & Company. As a result, the permanent ownership of clothing will decline, as more people turn to reselling clothing via consignment or simply renting their clothes.  Greater China will also overtake the US as the world’s largest fashion market and companies will need to pay more attention to India’s growing middle class. (Business of Fashion)

Photo by BabiradPicture/REX/Shutterstock
Get the best of FASHION in your inbox Thanks for signing up!
The latest fashion, beauty and celeb news delivered right to your email #FASHIONforall Now, check your inbox to complete your subscription
We won’t ever use your email address for anything else
Want even more FASHION? Follow us on social media.