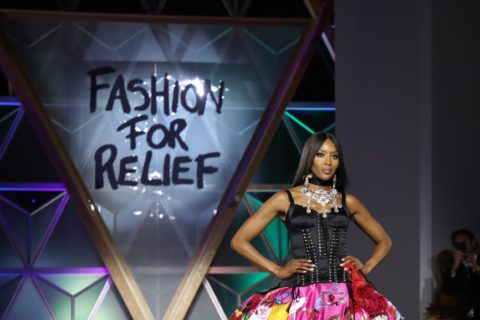 Naomi Campbell Hints at Retirement From the Runway

After hosting the latest Fashion for Relief fashion show in Cannes this weekend, rumours are swirling that supermodel Naomi Campbell is poised to retire from the catwalk.

Since it’s founding in 2005, Fashion for Relief has raised millions for such notable causes as the Haitian earthquake relief fund and the Ebola crisis. This year’s event was dubbed the Race to Equality, and a decision was made to focus on the Times Up legal defense fund and Save the Children charity, in particular.

High profile VIPs like Kendall Jenner, Virgil Abloh, and Edward Enninful were in attendance for a runway show that featured Campbell, Bella Hadid and Winnie Harlow on the catwalk. However, no amount of glitz and glam could overshadow Campbell’s shocking admission that she might be done with the runway once and for all.

According to The Evening Standard, Campbell said, “I don’t know if I can walk much longer. I’d love for it to be carried on by the younger generation and for me to sit in the audience and watch.” This mindset is a far departure from the one she had in a 2015 interview with Nick Knight, in which she said her retirement from fashion won’t be happening anytime soon, due to the fact that the fashion industry still wasn’t diverse enough. With a career spanning over 32 years, Naomi is the walking definition of the word ‘icon’, accomplishing major industry milestones. She was the first black model to appear on French Vogue and was a longtime muse to the late Azzedine Alaia. Additionally, she has the ability to take what’s old and make it new again, as seen in an interview with FASHION in 2017 where she discussed the reprisal of her legendary role as a Gap girl.

On June 8, Naomi will be honoured with the Fashion Icon award at the 2018 CFDAs in Brooklyn, New York. As for what the future holds for her runway career, only time will tell, but if there’s one thing we know, she will remain the catwalk queen; retired or not.