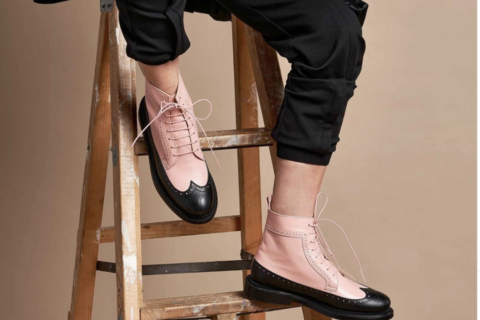 Kate, Anna and Tilda—they’re all there.

There’s been a marked increase in camaraderie within the fashion community of late, a beneficial by-product of what’s been a truly terrible last few months. In March, Montreal-based designer Eliza Faulkner began compiling a list of local businesses on her Instagram to promote them at a time when many indie creatives face an uncertain future in the wake of quarantine; she reached out to put one particular brand on my radar, Hoyden—which launched in January—and I was immediately intrigued by founder Melinda Bishara’s designs.

Smart, stylish and just a little bit subversive, Hoyden’s made-in-Spain footwear treads the line between classic and contemporary thanks to details like monk straps, studs and pops of pink. “I found it so difficult to find these styles of shoe in Canada, or even North America,” Bishara says of the brogues, derbys, oxfords and boots that make up her current collection. “One day I was driving to work and I had an a-ha moment—why don’t you do this yourself?”

She next ran the revelation past her parents; “I probably called them five minutes after I came up with the idea,” Bishara remembers. “They saw the potential—either that, or they were sick of me asking them to buy me shoes in Europe.” With a vision in place, Bishara began researching manufacturers for her brand, and landed on a family-operated business based in Barcelona.

Bishara conceives of the designs from her home studio in Montreal—a city known for its cobblestones and mountain incline—so it’s no surprise Hoyden’s wares are stylish yet sensible. “I love heels and I enjoy wearing them, but when I think about my day-to-day, it revolves around flat shoes and being comfortable,” she says. The versatility of the styles is also a bonus. “I’d wear them with an floaty dress,” says Bishara, adding that one of Faulkner’s pieces would be a perfect pairing. “I also can envision wearing a tailored suit with a boot or an oxford.”

Contrasting aesthetics are captivating to Bishara, and some of Hoyden’s styles are named after cultural figures who revel in the freedom of fusion. “The shoes and the names associated with them are inspired by people that have immensely influenced me throughout my life,” she says. The Tilda, for example, is a two-tone lace-up derby boot, and the juxtaposition of what’s traditionally considered a masculine shoe style with a cheery pink upper symbolizes Tilda Swinton’s own ability to blur the lines between masculine and feminine signifiers. And that mix is what makes these shoes so utterly of-the-moment.