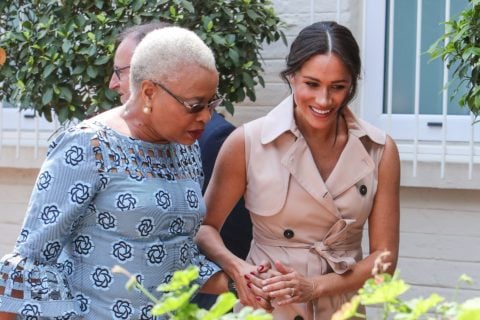 Update (02/10/19): Meghan Markle wrapped up her and Prince Harry’s 10-day tour of South Africa in yet another recycled piece today. And this one, we instantly recognized. The Duchess wore her blush pink trench dress, designed by Canadian label NONIE, to meet with Graca Machel, Nelson Mandela’s widow. Fittingly, Meghan had previously sported the dress in London last year whilst attending The Nelson Mandela Centenary Exhibition in London.

And if you missed out on it the first time around, the dress (which comes in the blush pink and black) is still available to purchase.

Original (17/07/18): When Meghan Markle stepped out onto the world stage as (gasp!) Prince Harry’s girlfriend, she was – much to the delight of our small homegrown industry –  extremely fond of wearing Canadian designers. Labels like Mackage, LINE the Label, Sentaler and Birks all seriously benefited from a little bit of Markle Sparkle. Case in point: Birks online sales spiked 400% after Meghan wore a pair of the brand’s earrings in her engagement photo.

But after the Royal Wedding came and went, Meghan seemed to all but stop wearing Canadian designers – at least with any notable frequency. Sure there was a pair of Birks earrings here and there, but she appeared to have traded in her (adopted) hometown pride in favour of big name design houses like Givenchy, Dior, and Prada. Fair enough! Royals can do whatever they dang please. (Except have political opinions, or wedding cakes that aren’t stodgy fruitcakes, the list goes on…)

But the sleeveless blush trench coat she she wore this morning to the Nelson Mandela Centenary Exhibit in London shows she hasn’t forgotten about her home-away-from home after all: it’s by the Calgary-based label NONIE (formerly House of Nonie) and is apparently an older piece from the back of her closet, purchased last year before her Royal glow-up. (In addition to her dress, Meghan was also sporting a pair of Birks Bee Chic white quartz stud earrings, that retail for a cool $450.)

In an interview with FASHION last year, designer Nina Kharey said of NONIE’s latest collection, “I wanted to make something that was feminine but strong, so that women wearing it can go into the world feeling fearless.”

Read more about NONIE from the FASHION archives.

Photo by Pool/Samir Hussein/WireImage
Get the best of FASHION in your inbox Thanks for signing up!
The latest fashion, beauty and celeb news delivered right to your email #FASHIONforall Now, check your inbox to complete your subscription
We won’t ever use your email address for anything else
Want even more FASHION? Follow us on social media.