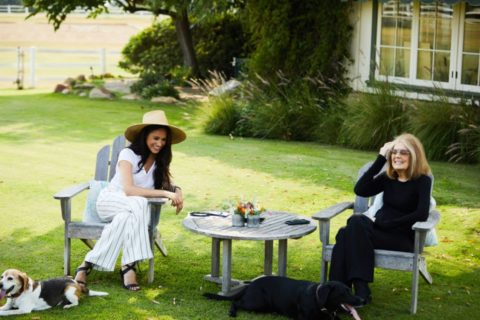 Photo by Matt Sayles. Copyright The Duke and Duchess of Sussex.
Style

Here’s What Meghan Markle Talked to Gloria Steinem About

100 years since the 19th Amendment was passed, the two talked feminism, voting rights and more.

Today marks 100 years since women were granted the right to vote in the United States with the 19th Amendment, and to honour the historic milestone, women’s empowerment organization Makers invited two trailblazing women to sit down in conversation: Meghan Markle and Gloria Steinem.

Filmed outdoors, with six feet between them, Markle and Steinem had a wide-ranging conversation about women’s rights, voter suppression, feminism and more. Of course the two discussed Kamala Harris, who recently made history as the first woman of colour to run on a major party Presidential ticket. “That’s exciting,” said Steinem, in a sentiment echoed by Markle as well:

“I’m so excited to see that kind of representation. You know, for me, being biracial, growing up, whether it was a doll or a person in office, you need to see someone who looks like you in some capacity. As many of us believe, you can only be what you can see. And in the absence of that, how can you aspire to something greater than what you see in your own world?”

discuss representation, why each vote matters and how all women “are linked, not ranked." MAKERS has an exclusive look at that historic backyard chat! ? Q&A to come tomorrow.

The Duke and Duchess’ choice to step back from royal life has afforded Markle the opportunity to speak out about issues close to her heart. Over the past few months, she has given numerous speeches about racial justice, women’s equality, and her own decision to cast a vote in the upcoming US election.

“If you don’t vote you don’t exist,” said Steinem. “It’s the only place where we are all equal: in the voting booth.”

The two also touched upon the importance of not just women but also men identifying as feminists. “Like my husband,” said Markle. “I love that when he just came in he said, ‘You know that I’m a feminist too, right Gloria?! It’s really important to me that you know that.’… And I look at our son and what a beautiful example that he gets to grow up with a father who is so comfortable owning that as part of his own self-identification. That there’s no shame in being someone who advocates for fundamental human rights for everyone, which of course includes women.”

Photo by Matt Sayles. Copyright The Duke and Duchess of Sussex.
Get the best of FASHION in your inbox Thanks for signing up!
The latest fashion, beauty and celeb news delivered right to your email #FASHIONforall Now, check your inbox to complete your subscription
We won’t ever use your email address for anything else
Want even more FASHION? Follow us on social media.