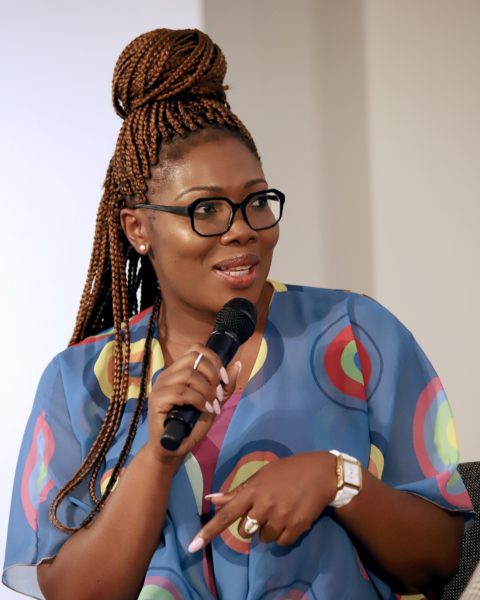 Diversity, inclusion, and intersectionality: three words that have begun to redefine the fashion industry in countless ways. This year, Gucci, Burberry, and Prada were called out for making racist missteps that could have easily been avoided if they had a diverse staff.  Though the conversation on diversity is growing louder, it hasn’t yet transformed the industry at large. Josiane Laure Modjom is looking to change that with her networking platform Malia Indigo.

Named after the moniker she adopted for her own plus-size modeling career, Malia Indigo aims to create a new roundtable for those who are underrepresented in the fashion industry to share their experiences. The platform allows anyone from stylists and bloggers, to models and designers to network with one another in a safe space. Modjom says her networking platform is about providing visibility for the people who are often overlooked. “I want everybody to be seen, I want everybody to get the right tools for their career,” she says. As a black woman and plus-size model, Modjom immediately noticed a huge gap in the industry and felt a desire to fill it. “I wanted people to see Canada as a place where there are people who are talented and curvy, so that’s why I decided to put Malia Indigo as a platform dedicated to plus size [models].”

From that point on, Malia Indigo produced its first successful plus-size fashion show in Toronto in 2017, which generated buzz as far as Europe and the US. Producing fashion shows was a way for Malia Indigo to “level up” in the industry. “I don’t believe that we should stay inside a bubble, we should be part of the whole industry– We want to make an impact,” she says.

Last week, Malia Indigo hosted a panel titled, Representation: A Conversation on Fashion and Intersectionality. Panellists included body positivity activist Aisha Fairclough, designer Michele Taras, Malia Indigo CEO Josiane Laure Modjom, designer Mic. Carter, and president of Matte PR Heidi Ruggier, with Kathleen Newman-Bremang serving as a moderator for the talk. The main takeaway from the panel was the importance of acknowledging one’s privilege and using that privilege to create space for those who have less. Invite others to the table or create your own, because as Mic. Carter so eloquently put it, “I’m done with your table [if] you’re not giving me a seat.”

In the fashion industry, change often trickles down from top and Modjom recognizes the importance of getting everyone on board to make sure genuine change can occur. With Malia Indigo, Modjom’s goal is to create a community that is welcoming to everybody and moves the fashion industry towards a more inclusive state. “Being part of the platform means you embrace the vision, you embrace the mission. That means we speak the same language, and we’re going to grow all together.”

Photography Courtesy of Malia Indigo
Get the best of FASHION in your inbox Thanks for signing up!
The latest fashion, beauty and celeb news delivered right to your email #FASHIONforall Now, check your inbox to complete your subscription
We won’t ever use your email address for anything else
Want even more FASHION? Follow us on social media.