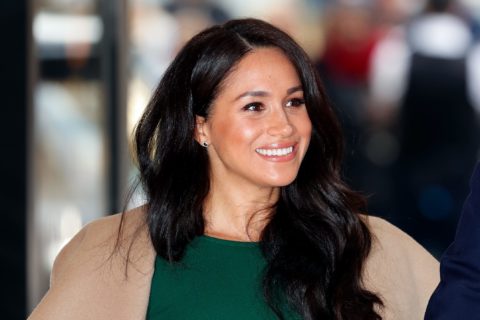 Lizzo, Billy Porter and Cardi B also all made the top 10.

Each year, fashion search platform Lyst releases its Year in Fashion report where it outlines the top shopping trends for the year just gone, as well as the public figures who had the most impact on our wardrobes overall. Looking at data from over 104 million shoppers, as well as page views, sales of six million products from 12,000 stores and media (both traditional and social) coverage, the site is able to determine the biggest fashion moments – and figures – from the year. And its Power Dressers list for 2019 has some pretty famous faces on it. See the top 10 below.

Arch meets Archie! This morning The Duke and Duchess were honoured to introduce their son Archie, to Archbishop, Desmond Tutu and his daughter, Thandeka. The Archbishop, a globally respected figure in anti-apartheid movement, is one of the world’s great champions of equality, and has spent his life tirelessly battling injustice. Their Royal Highnesses have joined The Archbishop and Thandeka to learn more about the work of The Tutu and Leah Legacy Foundation, and see first-hand how they are focussing on global awareness of the critical issues affecting the world. #RoyalVisitSouthAfrica • Photo ©️ Reuters

It’s no secret that the Duchess of Sussex’s wardrobe choices are some of the most followed in the world. Whether she’s on a royal tour, or stepping out for a low-key engagement, everyone wants to know what Meghan is wearing, and where to buy it for themselves. According to Lyst, on average Meghan’s outfits “sparked a 216 per cent increase in searches for similar pieces.” Her royal tour aesthetic – namely, the shirt dress – was also a huge hit with consumers as searches for the item grew by 45 per cent in a month. The Club Monaco dress she wore resulted in a 570 per cent search increase, and sold out within 24 hours of being identified. The black and white J. Crew skirt the Duchess wore for a private meeting with South African politicians, lawmakers and government officials was also super popular – searches for the brand rose 102 per cent as a result.

If anyone knows how to dress for a red carpet, it’s Timothée Chalamet. The breakout star of 2019, Chalamet has served up some seriously fierce looks this year. According to Lyst, the embellished Louis Vuitton bib he wore to the Golden Globes this year was the most impactful at the event. He followed this up with a sequin hoodie at the The King premiere in London which resulted in a 192 per cent increase in searches for men’s hoodies. Perhaps most impressively, after the actor wore a Haider Ackermann suit, searches for the brand spiked by a whopping 806 per cent in the following week.

Another red carpet maestro is Zendaya. The Greatest Showman star has wowed on several occasions this year – namely, at the Met Gala where she transformed into a real-life Cinderella in a huge blue gown by Tommy Hilfiger (the brand saw a 54 per cent increase in searches as a result) and at the 2019 Emmys when she wore Vera Wang. The stunning green corset dress caught the attention of literally everyone, and created a 33 per cent increase in searches for the brand.

thank you for having me @chanelofficial

She might only be 17, but Billie Eilish beat out several fashion heavyweights to snag the fourth spot on this year’s list. Having favoured neon green across several of her outfits, searches for the colour rose 69 per cent across the summer. Plus, when the Bad Guy singer posted a image of her wearing a piece by BBCICECREAM, searches for the brand spiked 211 per cent in less than a week.

Cardi B was a fixture on the fashion week front row last season – and people took note. Her outfits by Chanel, Thom Browne and Richard Quinn were some of the most talked about from the week according to Lyst. Elsewhere in the year, the vintage Mugler dress she wore to the 2019 Grammys caused a 169 per cent spike in searches for the designer in just four hours.

K-Pop star Lisa is having a stellar year – she became the most followed K-Pop personality on Instagram with 27 million followers, and also increased searches for the Celine Triomphe bag by 66 per cent after posting a photo of herself wearing it in the summer.

Baby we should hit the South of France✨

Fresh off the news that Coty bought a 51 per cent stake in Kylie Cosmetics, the youngest Jenner takes the sixth spot on the list for this year (she topped the list in 2018). Interestingly, Lyst says the floral milkmaid dress worn by the beauty entrepreneur in August was “responsible for a 66 per cent spike in searches for the style.” Plus, the gold dress she wore to Hailey Baldwin and Justin Bieber’s wedding “had more impact on searches than the bride.”

2019 has been the year of Lizzo, and Lyst has the numbers to prove it. The singer’s body positive fashion choices have been lauded across the globe, and searches for leotards have grown 28 per cent year on year as a direct result. Lyst also reports that “Lizzo fashion” has been a breakout search term since September.

Harry Styles’ boy band days are long behind him – a fact which can be seen most evidently in his fashion-forward ensembles. Following his turn on the Met Gala red carpet back in May, searches for single earrings grew 28 per cent, whilst searches for blue suits grew 78 per cent after the Sign of the Times singer wore one in New York back in March.

When you come to the Oscars, you must dress up. Thanks @csiriano for creating this custom couture masterpiece. @oscarheyman you have outdone yourselves once again with your iconic jewels. Style by @sammyratelle / @rrrcreative Styling Associate: @ashleymarienyc Grooming by @heyannabee @TheAcademy #AcademyAwards2019 #oscars⁠ ⁠ #oscars2019⁠ ⁠

Rounding out the list is the inimitable Billy Porter. Each appearance on a red carpet by Porter this year has resulted in praise from the fashion set across the globe, and with good reason. According to Lyst, his most impactful look was the tuxedo-gown by Christian Siriano which he wore to the 2019 Oscars. In the 24 hours following the event, searches for the designer increased 101 per cent.

Photo by Max Mumby/Indigo/Getty Images
Get the best of FASHION in your inbox Thanks for signing up!
The latest fashion, beauty and celeb news delivered right to your email #FASHIONforall Now, check your inbox to complete your subscription
We won’t ever use your email address for anything else
Want even more FASHION? Follow us on social media.