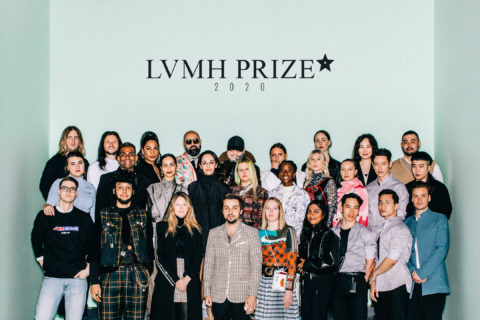 As the fashion industry struggles with the fallout from COVID-19, LVMH is doing its part to help young designers at this time.

As designers across the globe struggle in the wake of the COVID-19 pandemic, fashion conglomerates are trying to work out how to best support the industry. For LVMH, that means cancelling its annual Prize fund and instead using the prize money to create a solidarity fund to help the young designers the prize was designed to support.

In a release, the company explained that the eight finalists – Priya Ahluwalia of Ahluwalia, Charaf Tajer of Casablanca, Emma Chopova and Laura Lowena of Chopova Lowena, Nicholas Daley, Peter Do, Sindiso Khumalo, Supriya Lele and Tomo Koizumi – will each receive an equal portion of the main prize amount of 300,00 euros.

Additionally, the 150,000 euros cash component of the Karl Lagerfeld Prize, which is usually awarded to the runner-up, will instead be funneled into a fund specifically designed to help other younger designers, including all of those who have previously competed in any of the six prior LVMH Prize competitions. This includes Montreal-based brand Lecavalier, who was a finalist for the 2019 Prize.

Of the latter initiative, Delphine Arnault said, “Since its launch, the LVMH Prize has promoted and nurtured young talent. Each year, it places the spotlight on young designers from all over the world and supports the development of their companies. In this challenging context, this Fund in aid of young fashion designers highlights the main mission of the LVMH Prize by supporting our former winners.”

Exact details of how this fund will support the designers will be released at a later date, according to the company.

This year’s Prize ceremony was due to take place on June 5 with Rihanna, Virgil Abloh and Stella McCartney serving as judges for this year. Since its launch in 2013, the LVMH Prize has helped launch the careers of Jacquemus, Rokh, Marques’Almedia and Marine Serre.

Photograph courtesy of LVMH
Get the best of FASHION in your inbox Thanks for signing up!
You’ll get the latest fashion, beauty and celeb news delivered right to your email Now, check your inbox to complete your subscription
We won’t ever use your email address for anything else
Want even more FASHION? Follow us on social media.