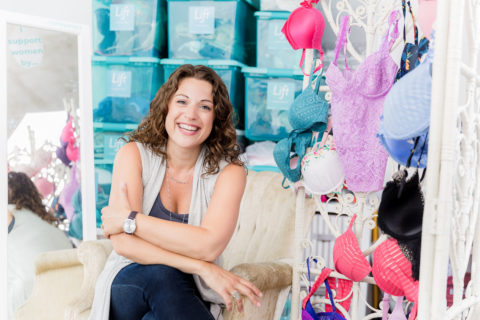 "I think that bras are a very small piece in giving women and trans people that confidence and dignity they need to take on the challenges they face.”

Upon entering Michelle Cinapri’s apartment, I was met by a number of stacked boxes filled to the brim with used bras.

In most people’s living rooms, this would have been confusing, or even awkward, but not with Cinapri. As the founder of Lift: The Bra Project, Cinapri helps clean and distribute new and gently worn bras to shelters and organizations across the city of Toronto. Named as such, Lift aims to give women and trans people living in poverty the literal and figurative ‘lift’ they need to make their lives more liveable. “I don’t think that bras are going to change the world, but I think that bras are a very small piece in giving women and trans people that confidence and dignity they need to take on the challenges they face,” Cinapri says.

Since its inception in March, the project has seen immense success, with an average of 100 bras collected per week, and a current total of 1,700 collected bras in varying sizes, colours and styles. After getting in contact with Sistering, a homeless shelter for at-risk women in Toronto, Cinapri was tasked with launching the project in eight days and collecting 70 bras to coincide with Sistering’s March event. After planning to only collect 100 bras in 3 weeks, Lift was met with an incredible response. “In three weeks we collected 650 bras and donated our first 400 bras to Sistering. It was just overwhelming.”

Now, with 15 drop off locations across the city (spanning from Roncesvalles, to The Beaches, Queens Quay, and all the way up to North York), one in Vaughan, and a tentative location in Mississauga, the project is continuing to grow rapidly. “I had hoped to expand by January of 2020 to more shelters, but we’ve started expanding as of 2 months ago.” In addition to Sistering, Lift has also partnered with Elizabeth Fry Toronto, and, most recently, Jessie’s Centre.

So, why bras? Cinapri explains the purpose is twofold. Bras are often thrown out when they end up at clothing donation centres because they are difficult to wash, so Lift helps divert bras from the landfill as well as providing a vital, ahem, boost in the accessibility of bras to women in vulnerable situations. “My heart broke thinking about a woman who didn’t have access to a well fitting bra if she needed one. I just couldn’t imagine going a day in my life without a bra, let alone if I was dealing with poverty and housing insecurity,” Cinapri says. For some, a properly-fitting bra can help to build confidence, and this notion is central to Lift.

The success of the project not only comes from Cinapri’s unfettered drive, but the support and engagement she received from the Toronto community. In just 3 months, Cinapri has collected 1,700 bras from a small number of people and diverted them from landfills. “It’s not possible that there could be such great need and such great a supply and we not connect those two pieces. So I think that’s why it works, it’s just an easy message for everyone to understand.”

Lift is not only about filling a need that has been overlooked, but also building confidence and allowing those experiencing poverty to be expressive. “It’s incredible to think about how much personality women are wearing under their clothes. Every bra is an expression of them that is covered up, and is just between them and the bra that they picked that morning.” Cinapri believes, and rightly so, that everyone deserves to radiate personality in their clothing, no matter their situation.

If you would like to donate gently used bras to Lift: The Bra Project, here is a list of all the drop-off locations in Toronto.