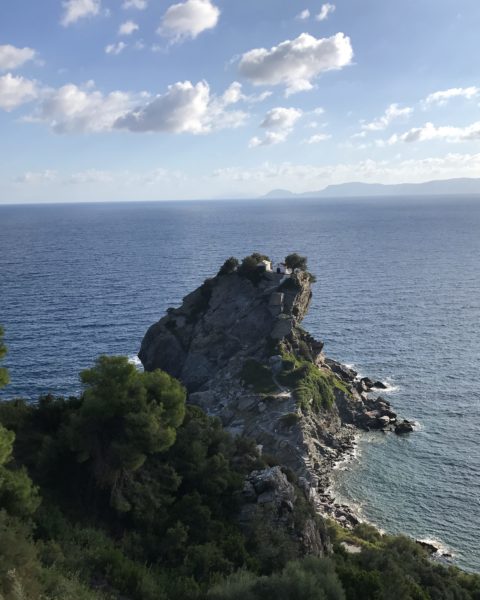 How I Learned to Love Mamma Mia!

It's amazing what a little Greek island can do.

As an avowed musical hater I had never even seen Mamma Mia when I was invited to journey to Greece to celebrate the 10th anniversary of the original film. It’s not as if I was going to turn down a trip like that. I’d interview the actors involved, sure, but mostly I would take in the sunshine before Canada turns into a winter hellscape. But then, like some ABBA-neezer Scrooge, my heart melted and I learned to love the Mamma Mia! phenomenon.

Day 1: Making it to the Mamma Mia Island

I am not a musical person. I am, however, a Cher person. This summer, a friend posted Cher’s cover of “Gimme Gimme Gimme (A Man After Midnight)” on his Facebook wall. I commented that it wasn’t exactly amazing, and said that I yearned for her return to the silver screen, beyond what small sustenance her short appearance in the Mamma Mia sequel surely could provide. “She is impeccable in Mamma Mia,” he shot back. “The movie is incredible. It filled me with the purest joy. The Guardian gave it four stars. My boyfriend and I are 100% going to see it again.” This was a ringing endorsement from one of my sternest friends. Could Mamma Mia! Here We Go Again be…for me? Despite it being a musical? An ABBA musical? And so I joined them for their second viewing.

Naturally, I started off all sour-faced, harrumphing and eye-rolling about the extreme wholesomeness of it all. But, slowly, I began to thaw. Everyone in the movie was just so dang happy, so smiling. There was so much blue, blue water and glorious sun blaring down on tanned, tawny skin. By the time Cher, clad in her instantly classic white suit, made her grand entrance, as dramatic and wondrous as promised, I was cheering and clapping like a lifelong fan.

A month later, I got an invite to visit the Mamma Mia island. How’s that for a glitch in the Matrix? Would I want to come visit Skopelos, the inspo and shooting location for Kalokairi and interview the young cast of the sequel—and try my hand at some choreo from the movie? The last bit gave me pause, due to my extreme fear of learning any kind of dance moves, but I figured that this invite, so shortly after my first tentative steps toward converting to Mamma Mia-ism must be fate. I was off to Greece!

And so I flew from Toronto to Athens, and then on to the comically tiny airport on the island of Skiathos. The marble floors and wooden benches and rickety old-fashioned tourism booth had a chic, cinematic look to them. I was ready for my adventure, suitcase a-bulge with my usual complement of 12 pairs of sunnies and 20 lipsticks in varying tropical shades.

We piled into a water taxi, manned by a skinny young Greek cutie, and roared off into the dark. We arrived on a small, stone-covered beach at the Adrina Beach Hotel, with a picturesque little pier leading us into the property. The air smelled sweet and clean and clear. On my little balcony, I gazed up at the moon, beaming down on me like a spotlight. It lit a trail of stars in the water, illuminating the pristine bay in soft gray. Was this real? How had I gone from watching the movie to being in the movie? I snapped off the A/C, reveling instead in throwing open the doors to the warm September night, the sound of the waves lapping at the shore soothing me to sleep.

If I thought the night-time view was great, the morning view was even more ludicrous. I always assumed folks posting photos of Greece tuned up the cerulean shade of their sea shots, but no—it really is that turquoise. I spent the day lolling on the beach, ordering lambchops and fresh shrimp and baked feta cheese and scooping up tzatziki and melitzanosalata (grilled eggplant spread with onion and parsley) with pita triangle after pita triangle. The water was as cozy as a bath, and just as clear. It felt a little surreal to be somewhere so beautiful. As the sea wore away my worries and the sun warmed my skin, I understood how Donna could have shimmied out of her staid English life and run away to Greece forever. It was paradise.

That night, everyone took turns taking sunset pics on the pier before gathering at the more modern Adrina Beach Hotel outpost next door for a grand feast. I went hard on the Greek dips once more, this time digging into the taramosalata (fluffy traditional spread with whitefish roe) and spicy feta dip with red pepper and chilis, followed by a delicious oily salad adorned with katiki cheese. Pitchers of sangria made the rounds. A pair of Greek men played tinkling traditional music, and, eventually, a large circle of Greek dancers formed, moving around us in time with our clapping. I was almost sad that there was very little ABBA music; the setting seemed strangely bereft without it.

Day 3: A Visit to Skopelos Village

The following day, we interviewed the young cast. That night, we wended our way over twisting roads into town, to see Skopelos Village. Cocktails were served poolside at the elegant seaside Skopelos Village Hotel, where, finally, the ABBA started blasting on repeat, with “Mamma Mia” and “Dancing Queen” in high rotation. I kept my fingers crossed for Cher’s “Fernando,” a yearning tune that would work perfectly with the starry night, full of friends and wine and a dramatic sea view. Once we’d had our fill of rum, we filed in for dinner, sitting down to the restaurant’s famous buttery green beans, traditional Skopelos cheese pie, and bread-filled salad, washed down with glasses of crisp ouzo. We also enjoyed checking out the drunk pics of the films’ talent mounted on the walls; many of them stayed here while filming the first movie.

Our journo coterie meandered down the road toward the village itself, a charming collection of stone buildings and bustling little cafes. Despite the influx of folks eager to see the real-life Mamma Mia island, tourism is still relatively low-key. The island manages to retain that authentic small-Greek-island feel. I lay awake that night, pondering the following day’s adventures, including a climb up the famously steep church steps—and tackling the choreography, my great fear. Would the Mamma Mia! dream turn into a nightmare?

Day 4: All Aboard the SS Mamma Mia

First up, we went to the Agios Ianonis Kastri, the tiny chapel perched atop a rocky crag soaring high above the sea and accessible only via a winding set of steps so vertigo-inducing that even the genial Colin Firth bemoaned them in the movie (“these get worse every year!”). I steeled myself to the task, and began the long, slow march up the steps. Gasping and panting as if I had just run a marathon, I dragged myself up the last few to emerge, victorious, upon the small churchyard up top. A bell hung from a tree, and many winded journalists clanged it in jubilance at not having suffered a stroke mid-climb. The view was, of course, spectacular. There is still a sense of magic about the place. Then it was back on the bus for another wall-to-wall ABBA sesh, the soundtrack songs booming back-to-back, accompanying us to the port where our vessel awaited us.

We got on board the elegant sailboat, necking beers and sodas and sampling soft Greek cheeses. The original versions of “Mamma Mia” and “Dancing Queen” play on a loop, interspersed by the occasional track from the movies. I start to feel like Jack Nicholson in The Shining, stuck in Mamma Mia for all time, with the caretaker informing me “you’ve always been here.” Hasn’t life always been soundtracked by tootling flutes and earnest harmonizing? Maybe I’ve been in the sun too long.

At least, now, I’d soon have the dance moves to go with these ominipresent anthems. We arrived at Kastani Beach, the stunning locale for “Does Your Mother Know,” “Lay All Your Love On Me,” and “I Have A Dream.” And also, potentially, the locale of my life’s greatest embarrassment. The hot, hot sun beat down on us, as we feverishly sucked back coconut drinks and wondered when the dancing would begin. Thankfully, Lucy Baldrick, the sequel’s assistant choreographer, was a human beam of encouraging, cuddly light, a dainty queen with a platinum pixie and an encouraging smile that tried to assure us we were not about to embarrass ourselves horribly. “If I can teach Pierce Brosnan to do this, I can teach you!” she cried. And so she walked us through the “Dancing Queen” steps, including the piano-playing move, the Greek arms waving aloft, and several kinds of disco pointing. Despite moving zombie-like through several bars, I managed to stay conscious and not pass out from horrible shame. So—a win, for me.

As I floated in the warm blue sea the next day, I felt something I hadn’t felt in a while. Calm. Even though I had looming deadlines awaiting me at home, it was…okay. I had the sun and the sea, I had new friends. I had the proud booming oom-pah-pah of “Super Trouper.” I laughed to myself. So that is why everyone loved these bloody movies so much, I thought. Life is hard. Life is pain. Life is terrible. And these days, it’s especially terrible. The idea that we can leave our drudgery behind and go live on a tiny Greek island—even for two hours—is a respite we crave.

Ridiculous? Oh, most definitely. But a balm for the soul? Certainly. After hearing nothing but ABBA for days and 200 spins of “Dancing Queen,” I wondered if I would ever want to hear ABBA or any Mamma Mia! tracks again. Yet, lately, against all odds, I’ve found myself humming them already: “Super Trouper,” “Gimme Gimme Gimme (A Man After Midnight)” and, yes, even “Dancing Queen.” I got home from the Mamma Mia island over a month ago—but the joy remains. Mamma Mia, how could I resist you?